The horrible host: The Strange Adventures of a Private Secretary in New York by Algernon Blackwood (1906)

"The Strange Adventures of a Private Secretary in New York" by Algernon Blackwood (1906) is the most unsettling story I have read since "The Snout" by Edward Lucas White.

Shorthouse, the secretary of the title, is sent into darkest Long Island by his employer. A business partnership has broken up, and the more nefarious partner (Joel Garvey) is demanding to  razor-out his signatures from some legal papers.

Once the razoring is accomplished, Garvey insists Shorthouse spend the night. And there ensues a horrifying dinner a deux:

….Shorthouse said the soup was delicious and bravely swallowed another mouthful. In reality his thoughts were centred upon his companion, whose manners were giving evidence of a gradual and curious change. There was a decided difference in his demeanour, a difference that the secretary felt at first, rather than saw. Garvey's quiet self-possession was giving place to a degree of suppressed excitement that seemed so far inexplicable. His movements became quick and nervous, his eye shifting and strangely brilliant, and his voice, when he spoke, betrayed an occasional deep tremor. Something unwonted was stirring within him and evidently demanding every moment more vigorous manifestation as the meal proceeded.

Intuitively Shorthouse was afraid of this growing excitement, and while negotiating some uncommonly tough pork chops he tried to lead the conversation on to the subject of chemistry, of which in his Oxford days he had been an enthusiastic student. His companion, however, would none of it. It seemed to have lost interest for him, and he would barely condescend to respond. When Marx presently returned with a plate of steaming eggs and bacon the subject dropped of its own accord.

"An inadequate dinner dish," Garvey said, as soon as the man was gone; "but better than nothing, I hope."

Shorthouse remarked that he was exceedingly fond of bacon and eggs, and, looking up with the last word, saw that Garvey's face was twitching convulsively and that he was almost wriggling in his chair. He quieted down, however, under the secretary's gaze and observed, though evidently with an effort —

"Very good of you to say so. Wish I could join you, only I never eat such stuff. I only take one course for dinner."

Shorthouse began to feel some curiosity as to what the nature of this one course might be, but he made no further remark and contented himself with noting mentally that his companion's excitement seemed to be rapidly growing beyond his control. There was something uncanny about it, and he began to wish he had chosen the alternative of the walk to the station.

"I'm glad to see you never speak when Marx is in the room," said Garvey presently. "I'm sure it's better not. Don't you think so?"

He appeared to wait eagerly for the answer.

"Yes," the other went on quickly. "He's an excellent man, but he has one drawback — a really horrid one. You may — but, no, you could hardly have noticed it yet."

"Not drink, I trust," said Shorthouse, who would rather have discussed any other subject than the odious Jew.

"Worse than that a great deal," Garvey replied, evidently expecting the other to draw him out. But Shorthouse was in no mood to hear anything horrible, and he declined to step into the trap.

"The best of servants have their faults," he said coldly.

"Nothing frightens me," he laughed. (Garvey must understand that at all events.) "Nothing can frighten me," he repeated.

"I'm glad of that; for it frightens me a good deal sometimes."

Shorthouse feigned indifference. Yet he was aware that his heart was beating a little quicker and that there was a sensation of chilliness in his back. He waited in silence for what was to come.

"He has a horrible predilection for vacuums," Garvey went on presently in a still lower voice and thrusting his face farther forward under the lamp.

"Vacuums!" exclaimed the secretary in spite of himself. "What in the world do you mean?"

"What I say of course. He's always tumbling into them, so that I can't find him or get at him. He hides there for hours at a time, and for the life of me I can't make out what he does there."

Shorthouse stared his companion straight in the eyes. What in the name of Heaven was he talking about?

"Do you suppose he goes there for a change of air, or — or to escape?" he went on in a louder voice.

Shorthouse could have laughed outright but for the expression of the other's face.

"I should not think there was much air of any sort in a vacuum," he said quietly.

"That's exactly what I feel," continued Garvey with ever growing excitement. "That's the horrid part of it. How the devil does he live there? You see —"

"Have you ever followed him there?" interrupted the secretary. The other leaned back in his chair and drew a deep sigh.

"Never! It's impossible. You see I can't follow him. There's not room for two. A vacuum only holds one comfortably. Marx knows that. He's out of my reach altogether once he's fairly inside. He knows the best side of a bargain. He's a regular Jew."

"That is a drawback to a servant, of course —" Shorthouse spoke slowly, with his eyes on his plate.

"A drawback," interrupted the other with an ugly chuckle, "I call it a draw-in, that's what I call it."

"A draw-in does seem a more accurate term," assented Shorthouse. "But," he went on, "I thought that nature abhorred a vacuum. She used to, when I was at school — though perhaps — it's so long ago —"

He hesitated and looked up. Something in Garvey's face — something he had felt before he looked up — stopped his tongue and froze the words in his throat. His lips refused to move and became suddenly dry. Again the mist rose before his eyes and the appalling shadow dropped its veil over the face before him. Garvey's features began to burn and glow. Then they seemed to coarsen and somehow slip confusedly together. He stared for a second — it seemed only for a second — into the visage of a ferocious and abominable animal; and then, as suddenly as it had come, the filthy shadow of the beast passed off, the mist melted out, and with a mighty effort over his nerves he forced himself to finish his sentence.

"You see it's so long since I've given attention to such things," he stammered. His heart was beating rapidly, and a feeling of oppression was gathering over it.

"It's my peculiar and special study on the other hand," Garvey resumed. "I've not spent all these years in my laboratory to no purpose, I can assure you. Nature, I know for a fact," he added with unnatural warmth, "does not abhor a vacuum. On the contrary, she's uncommonly fond of 'em, much too fond, it seems, for the comfort of my little household. If there were fewer vacuums and more abhorrence we should get on better — a damned sight better in my opinion."

"Your special knowledge, no doubt, enables you to speak with authority," Shorthouse said, curiosity and alarm warring with other mixed feelings in his mind; "but how can a man tumble into a vacuum?"

"You may well ask. That's just it. How can he? It's preposterous and I can't make it out at all. Marx knows, but he won't tell me. Jews know more than we do. For my part I have reason to believe —" He stopped and listened. "Hush! here he comes," he added, rubbing his hands together as if in glee and fidgeting in his chair.

Steps were heard coming down the passage, and as they approached the door Garvey seemed to give himself completely over to an excitement he could not control. His eyes were fixed on the door and he began clutching the tablecloth with both hands. Again his face was screened by the loathsome shadow. It grew wild, wolfish. As through a mask, that concealed, and yet was thin enough to let through a suggestion of, the beast crouching behind, there leaped into his countenance the strange look of the animal in the human — the expression of the were-wolf, the monster. The change in all its loathsomeness came rapidly over his features, which began to lose their outline. The nose flattened, dropping with broad nostrils over thick lips. The face rounded, filled, and became squat. The eyes, which, luckily for Shorthouse, no longer sought his own, glowed with the light of untamed appetite and bestial greed. The hands left the cloth and grasped the edges of the plate, and then clutched the cloth again.

"This is my course coming now," said Garvey, in a deep guttural voice. He was shivering. His upper lip was partly lifted and showed the teeth, white and gleaming.

A moment later the door opened and Marx hurried into the room and set a dish in front of his master. Garvey half rose to meet him, stretching out his hands and grinning horribly. With his mouth he made a sound like the snarl of an animal. The dish before him was steaming, but the slight vapour rising from it betrayed by its odour that it was not born of a fire of coals. It was the natural heat of flesh warmed by the fires of life only just expelled. The moment the dish rested on the table Garvey pushed away his own plate and drew the other up close under his mouth. Then he seized the food in both hands and commenced to tear it with his teeth, grunting as he did so. Shorthouse closed his eyes, with a feeling of nausea. When he looked up again the lips and jaw of the man opposite were stained with crimson. The whole man was transformed. A feasting tiger, starved and ravenous, but without a tiger's grace — this was what he watched for several minutes, transfixed with horror and disgust.

Marx had already taken his departure, knowing evidently what was not good for the eyes to look upon, and Shorthouse knew at last that he was sitting face to face with a madman.

The ghastly meal was finished in an incredibly short time and nothing was left but a tiny pool of red liquid rapidly hardening. Garvey leaned back heavily in his chair and sighed. His smeared face, withdrawn now from the glare of the lamp, began to resume its normal appearance. Presently he looked up at his guest and said in his natural voice —

"I hope you've had enough to eat. You wouldn't care for this, you know," with a downward glance.

Shorthouse met his eyes with an inward loathing, and it was impossible not to show some of the repugnance he felt. In the other's face, however, he thought he saw a subdued, cowed expression. But he found nothing to say….

To find out how much worse Shorthouse's evening gets after dinner, you can read  the story here. 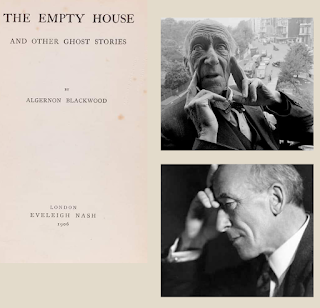 Posted by Jay Rothermel at 4:51 PM