….This is the tale as it was told to me by the smoke of a cowchip fire, at night on the Panhandle plains of West Texas. I was sixteen, passing as twenty-two, and the old man was pushing eighty but did not remember his actual age. Nor did he know his white-man's name.

We had been hired by a wolfer and trapper who had made a deal to skin cattle killed by drought on a big ranch. Around every windmill dead cattle could be found, numbering from fifteen to thirty-five, and saving their hides was a job only for someone with a strong stomach.

The wolfer was named Peterson, and when the old man heard the name he said he thought it was his own. Anyway, the name was familiar. His father, he said, was a brute, a big, raw-boned man who worked his son like a slave and treated him worse. Once his mother died, the boy was taken from school, where he had spent just one year, and put to work. When the Apaches raided their homestead, his father fought like a tiger, but was killed.

When a warrior was about to kill the boy, another Apache stopped him. "I take," he said. "You fight like him, you my son."

When a warrior was about to kill the boy, another Apache stopped him. "I take," he said. "You fight like him, you my son."

Peterson, as he now called himself, had never looked back. From that time on he was an Apache and wished to be nothing else. His life as a white boy had been hard and cruel; among the Indians he was better treated and he worked hard to be one of them. He believed he was almost seven when taken by the Apache, and five years later he rode on his first war party.

He was not allowed to fight. He went with others of about his age to care for horses, to gather wood for fires, to cook meat for the braves, and to learn by watching and listening.

They were going after a stage said to be coming from the east, and they would attack near Stein's Peak, which marked the entrance to what white men called Doubtful Canyon.

The Canyon was eight to ten miles long, depending on who was measuring, and its name resulted from the fact that, during Apache days, if you went in, it was doubtful you'd get out.

On this day, Apache signals had made them aware the stage was coming soon after it left Cooke's Spring near Deming, New Mexico. Cochise and even the chief Mangas Colorado, had gathered their warriors to attack near East Garrison Station at the entrance to Doubtful Canyon.

It was a hot, still day, his first war party.

Peterson remembered it well. Crouched among the rocks atop a canyon wall, he watched the stage approaching, his heart pounding.

No warriors were in sight until the stage entered the canyon. Then, like magic, the canyon walls were lined with them. The only location that offered a chance for defense was a rocky knoll at one side of the trail.

Watching from the rocks, the boy saw a sudden splash of crimson across a horse's shoulder and saw the animal stumble, then go down, piling up in a mass of struggling horses and a tangle of harness. The pursuing stage overran the horses and overturned, the men spilling out, rifles in hand.

At once they began to shoot, while some struggled to haul boxes from the stage. From high on the cliffside he could see it all, bright in the sunlight.

There were seven men. He counted them. They had rifles and pistols, and the boxes must contain ammunition. They fell into position and began shooting. The Apaches went to cover, leaving several of their number dead upon the rocks.

The watching boy moved into the shade of a rock. There was no shade for the fighting men on the knoll, and the sun was blistering. They ranged themselves around the rocks to cover all approaches. It was not a good position, for many parts of the knoll were exposed, but the stage itself helped. It was no protection against bullets but it did protect against the iron-tipped arrows.

One of the white men was down. He must be dead, as there was no effort to pull him closer, although another man did take his rifle and ammunition belt.

The Apaches did not know it then, and the Peterson boy, if that was his name, only learned it long after, but the Free Thompson Party, the men in that stagecoach, had thousands of rounds of ammunition. What they did not have was food. Even more important, they had no water, and there was no water hole nearer than Stein's Peak, several miles away.

From where the boy watched, he could see it all, but the distance was too great for a rifle to fire with accuracy.

The rocks were hot to his touch--blistering, in fact. It must be pure Hell down in that oven of a canyon where no wind blew and no air stirred. All day the fighting went on, and the canyon walls echoed with gunfire. When night fell, the guns were silent, but the Apaches--who did not like to fight at night because, they were reported to believe, if one was killed in the dark, his spirit must forever wander in darkness--still gathered close around. Peterson knew there was no chance for the white men to escape, and they knew it as well.

Down there among the scattered rocks and the wreck of the stagecoach, men would be smoking, chewing tobacco, watching, and resting.

They had no hope of escape. No cavalry would be coming to their rescue, for the pony soldiers had gone east to fight in the War Between the States. They would be bandaging wounds down there, holding pebbles in their mouths to alleviate thirst, and piling rocks to make their position more secure.

Beside the smoky cow-chip fire, the old man told the story of that desperate fight so long ago, the first one he had witnessed. He told of the coming of light which showed how well the white men had worked during the night, gathering rocks to fill spaces between boulders, making their position more secure. The bloating bodies of the dead horses were a protection, too, but there were only five men moving about now, and hundreds of Indians.

The boy did not know how many Apaches there were, for both Cochise and Mangas Colorado had brought warriors, while his group had come from Nana's band.

There was only sporadic fighting now, for the Apaches had suffered. Bodies lay stretched on the sand and hanging over rocks to indicate the accuracy of the white-eye's shooting. A half hour might go by without a shot, and then some ill-advised Indian would show himself and die for his carelessness.

Searching fire from Apache rifles sought hidden targets, chancing shots into the stagecoach in hopes some man might be using it for shelter, but the thin walls and floor of the stage were no protection against .44 caliber bullets, which could penetrate several inches of pine.

Occasionally a group of Apaches would attempt an attack and there would be a burst of firing.

The boys watching from the ridge could see little movement now. were more men dead? Or were they guarding their strength? Boards had been pulled from the splintered stage in an effort to make some sort of a shield from the sun. Again the day passed, and again night came with no shooting, and only a waiting time until the morrow.

There is no way I can tell that story as it was told to me beside the smoky fire on the plains of the Panhandle, told to me by the old man who remembered it so well, a white man who had become completely an Apache, and was in his heart and mind an Apache still.

The third day dawned, a third day of terrible thirst and gnawing hunger, a third day of desperation. How many were left? The boys watching from the crest could not tell, but whenever an Apache moved, a rifle spoke from the rocky knoll.

At last, midway in the third afternoon, the shooting ended, and after a long time Apaches began to expose themselves. When there was no more firing they went down, one after another, until hundreds of them were gathered.

The ammunition was all gone. One of the last men had broken the extra rifles so they would not be available for use by the Apaches.

Apaches carried their dead away and rarely admitted their losses, but the reports were that between 130 and 150 Apaches died in that three-day fight. All seven of the defenders died, the last one, or perhaps two, dying by his own hand with his last bullet, rather than suffer the torture that awaited him if taken alive.

Long after, in Chihuahua, Cochise was said to have told of the battle and declared they were the bravest men he ever knew.

If that was true, I do not know. I only know the story that was told to me that night by the dim light from a smoky fire.

It was the first of many stories told over fires, tales of swift attacks and long pursuits by the pony soldiers and the tactics the Indians used. Years later, some of it was to appear in Hondo, some in Shalako and in The Lonely Men. But at the time I had no idea of ever writing about what I was experiencing then, or of what I was hearing.... 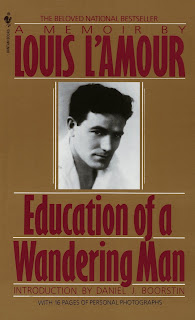 Posted by Jay Rothermel at 8:38 AM