Bendigo Shafter (1979) by Louis L'Amour is a great novel about a young man coming of age in the South Pass area of Wyoming in late 1860s. He and his sister arrive with a wagon train fraction that decided not to risk the Sierras so late in the season.

Bendigo's older brother Cain is a blacksmith and miller. Bendigo only begins to figure himself out during the first harsh winter, when he and two fellow townsmen hunt to feed their community and stave off disaster. Bendigo learns from the older men how to act.

L'Amour's great lesson here is that leadership is not granted, it is taken. Bendigo acts, and in consequence is looked to. He is deliberate, careful  to study his friends and neighbors. He hungers for books as another means of understanding the world.

There are many thrills in the novel. Anyone looking for winter adventure will appreciate the blizzard-bound train or the flight up into the Windrivers to elude claim-jumpers.  By far the most poignant scenes, and the most uncanny, describe
Bendigo's growing fascination with the Medicine Wheel site.

....When we stopped again to let our horses rest, Uruwishi gestured toward the Big Horns, which lay off to the east. "Many days' journey to the north there is a place, a place to see. It is a stone wheel…a Medicine Wheel."

"Many days. It is high…a high, far place where a man can look all around. The Wheel is of stones."

"Standing up?" I was incredulous.

"On the ground. Many stones maybe so high"—he showed his hands two to three feet apart, moving them slightly as he spoke—"and many spokes."

He shrugged. "Who knows? The People Who Came Before It Was Light…maybe the Little People. They were there."

"Have you been there?"

"Once…when I was a papoose. My father prayed there, to the Great Spirit."

He turned his horse slightly. "I think it is a Medicine Wheel…I think it is big medicine. I think many moons, many lifetimes ago people came there to pray, to sit in thought upon the grass around the Wheel.

"On some of the ridges there are stone arrows that point the way."

"You say it was built long ago?"

"Long, long ago…it was built when the animals with long noses and long teeth were hunted. Men carved their bones then, and scratched upon them to count the moons, and to remember the planting times."

L'Amour's style of storytelling brilliantly conveys the episodic toing and froing of adolescence for both Bendigo and his world. Parts of the frontier open, others close. Towns grow and thrive, and then are bypassed. Only the women and men made in the process go on 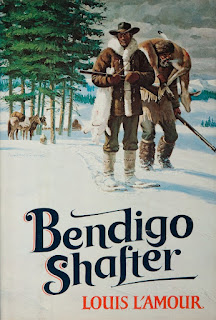 Posted by Jay Rothermel at 6:19 PM No comments: