Planet of the Apes by Pierre Boulle

I was eight when I went ape-crazy.

Nothing compared to the Star Wars infection of age 11-14, but still deep.

The first Apes film had just made its TV premiere. I filled sketchbooks with imagined scenes of conflict. The next Easter I got action figures. Then the coloring and activity books. Then the Marvel magazine came out.Then they started a live-action TV series. Swoony times...

But I never cracked the novel. There was no crash-landing, and no misanthropic Taylor to keep me reading.

Pick it up today and try to imagine yourself at age eight gobbling this Gallic sci-fi missal.

At the beginning of 2019 I made a list of books I tried to read in my youth.

I think undiagnosed HFA explains my reading failures in early life. So I wanted to go back and see what I missed.

Boulle has a lovely style, reminding me of Malraux in its precision and coldness. The human space explorers recall some of Verne's protagonists, though Boulle metes out death much more promptly.

A favorite early scene, after the explorers land on a planet orbiting Betelgeuse, ends with one of those cardinal images in literature: the discovery of a single human footprint in the sand:

....There was no doubt that we were on a twin planet of our Earth. Life existed. The vegetable realm was, in fact, particularly lush: some of these trees must have been over a hundred and fifty feet tall. The animal kingdom soon appeared in the form of some big black birds, hovering in the sky like vultures, and other smaller ones, rather like parakeets, that chased one another chirping shrilly. From what we had seen before landing, we knew that a civilization existed, too. Rational beings—we dared not call them men yet—had molded the face of the planet. Yet the forest all around us appeared to be uninhabited. This was scarcely surprising; landing at random in some corner of the Asiatic jungle, we should have had the same impression of solitude.

Before taking a further step, we felt it was urgent to give the planet a name. We christened it Soror, because of its resemblance to our Earth.

Deciding to make an initial reconnaissance without delay, we entered the forest, following a sort of natural path. Arthur Levain and I were armed with carbines. As for the professor, he scorned material weapons. We felt light-footed and walked briskly: not that our weight was less than on Earth—there again the similarity was complete—but the contrast with the ship's force of gravity prompted us to scamper along like young goats.

We were marching in single file, calling out every now and then to Hector, but with no success, when young Levain, who was leading, stopped and motioned us to listen. A murmur, like running water, could be heard in the distance. We made our way in that direction and the sound became clearer.

It was a waterfall. On coming to it, all three of us were moved by the beauty of the site. A stream of water, clear as our mountain torrents, twisted above our heads, spread out into a sheet on a ledge of level ground, and fell at our feet from a height of several yards into a sort of lake, a natural swimming pool fringed with rocks mingled with sand, the surface of which reflected the light of Betelguese, which was then at its zenith.

The sight of this water was so tempting that the same urge seized both Levain and me. The heat was now intense. We took off our clothes and got ready to dive into the lake. But Professor Antelle cautioned us to behave with a little more prudence when coming up against the system of Betelguese for the first time. Perhaps this liquid was not water at all and might be extremely dangerous. He went up to the edge of it, bent down, examined it, then cautiously touched it with his finger. Finally he scooped a little up in the palm of his hand, smelled it, and wetted the end of his tongue with it.

"It can't be anything but water," he muttered.

He bent down again to plunge his hand into the lake, when we saw him suddenly stiffen. He gave an exclamation of surprise and pointed toward something he had just discerned in the sand. I experienced, I believe, the most violent emotion of my life. There, beneath the scorching rays of Betelgeuse that filled the sky above our heads like an enormous red balloon, visible to all of us and admirably outlined on a little patch of damp sand, was the print of a human foot. 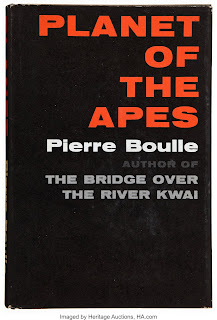 Posted by Jay Rothermel at 8:02 AM No comments: