No hills, and precious little horror: The Horror from the Hills by Frank Belknap Long 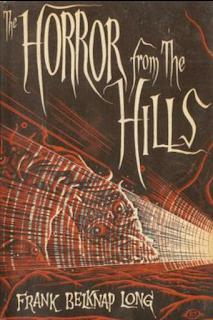 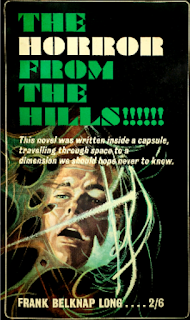 The Horror from the Hills
by Frank Belknap Long.

This novel, which I started last night and finished this morning before yard chores, is a bitter disappointment.

The Horror from the Hills, like Strange Eons, was a title rolling around in my head for thirty-two years. First heard of in the early 1980s, when Lovecraftian books were unknown in my small Ohio town. It was probably mentioned in an article or interview in my first university: Rod Serling's Twilight Zone Magazine.

The words horror from the hills struck a deep chord with me. I have always prized rural/sylvan settings above urban in choices of genre fiction: Blackwood, M.R. James, E.F. Benson, Mundy and Rolt and their aesthetic issue.

Later I learned that Long's novel was inspired by an anecdote from Lovecraft himself, which has come to be called "The Very Old Folk."  This was a fragment from one of Lovecraft's letters, a perfect "pastel in prose" which only served to whet my appetite for The Horror from the Hills.

Like most tyros who mined Lovecraft's notes and letters (looking at you, threshold-lurker August Derleth), it is a work not only tiresome and tedious in itself, it casts a shaming backward shadow. I am reminded of Karl Marx's dismissive summation of many "Marxists" when he wrote: 'I have sown dragon's teeth and harvested fleas.'

There are no hills in The Horror from the Hills, and precious little horror. Instead we have Manhattan and a coastal highway on the New Jersey shore. "The Very Old Folk" is relegated to the status of dream anecdote experienced by psychic detective (and Entropy-Reversing Machine inventor) Roger Little, to whom Long's protagonist Algernon Harris turns in his struggle againt cosmic Heffalump Chaugnar Faugn.

Most of The Horror From the Hills is taken up with a catalogue of Long's (and most genre writers of the era generally) misunderstandings of physics. Creative misunderstandings, I'm sure they would protest. But mentioning transcendental mathematics and hyperdimensional physics, Long prepares the ground for pages of stupefying pseudo-scientific rationalizational:

....Yet despite the transcendental nature of even its incarnate shell, despite the fact that even in its earth-shape it was fashioned of a substance unknown on the earth and that we can form no conception of its shape in the multidimensional sphere it now inhabits, it is my opinion that it is inherently, like ourselves, a circumscribed entity—the spawn of remote worlds and unholy dimensions, but a creature and not a creator, a creature obeying inexorable laws and occupying a definite niche in the cosmos.

....It was neither beneficent nor evil, but simply amorally virulent—a vampire-like life form from beyond the universe of stars strayed by chance into our little, walled-in three-dimensional world. One unguarded gate may be standing ajar…”

....“With a concrete embodiment of the concepts of transcendental mathematics,” corrected Little. “And such concepts are merely empirically scientific. I am aware that science may be loosely defined as a systematized accumulation of tendencies and principles, but classically speaking, its prime function is to convey some idea of the nature of reality by means of an inductive logic. Yet our mathematical physicist has turned his face from induction as resolutely as did the mediaeval scholastics in the days of the Troubadours. He insists that we must start from the universal assumption that we can never know positively the real nature of anything, and that whatever ‘truth’ we may deduce from empirical generalities will be chiefly valuable as a kind of mystical guidepost, at best merely roughly indicative of the direction in which we are travelling; but withal, something of a sacrament and therefore superior to the dogmatic ‘knowledge’ of Nineteenth Century science. The speculations of mathematical physicists today are more like poems and psalms than anything else. They embody concepts wilder and more fantastic than anything in Poe or Hawthorne or Blake.”

....Little shook his head. “I mean simply that Chaugnar Faugn and its hideous brethren were joined together hyperdimensionally and that we destroyed them simultaneously. It is an axiom of virtually every speculative philosophy based on the newer physics and the concepts of non-Euclidean mathematics that we can’t perceive the real relations of objects in the external world, that since our senses permit us to view them merely three-dimensionally we can’t perceive the hyperdimensional links which unite them...."

In short: no cosmicism, no suspense, not even a whiff of the uncanny.

Posted by Jay Rothermel at 1:58 PM