[....] open your 1797 edition of the Encyclopedia Britannica and flip to "Specter." After discussing ghosts in the Bible, in ancient Rome and Greece, and in cultures across the world—after an examination of logical problems with ghosts as presented in allegedly true reports (e.g., why do they so often appear only at night?)—the writer expounds upon a list of natural causes that account for sightings. They are: 1) misperceptions caused by the dark and by fear; 2) dreams mistaken for reality, an error made especially by superstitious people; 3) opium; 4) hypochondria, hysteria, or madness; 5) drunkenness; and 6) hoaxes. A couple of years later, an article appeared in The Monthly Magazine that offers a more physiological explanation for ghosts. Identified only as P.W., the writer opens by asking how reports of ghosts from reliable witnesses can be reconciled with "sound reason and the established laws of nature." The proposed answer is that such sightings result from a glitch between the optic nerve and the brain. "We experience the same thing," says P.W., "on receiving a violent blow to the face, when we imagine we see a great number of sparks before our eyes. Thus, different pressures and motions may also produce different notions, which have no external efficient object." In other words, anyone can see what isn't there at times. The writer supports this idea with several examples of vision gone wrong. The closest one that comes to something like a ghost involves an elderly man claiming to have seen a girl when others in the room saw nothing. In the next few decades, though, respected physicians focused more on ghost sightings and further developed the thesis that these are attributable to physiological conditions.[17] Of course, those doctors' books presumably had a far narrower readership than the encyclopedia and magazine mentioned above.

It is interesting to note that, in the 1790s, even popular fiction was employing physical causes to explain and debunk any and all ghost sightings. Doing so was the hallmark of Ann Radcliffe, whose Gothic romances made her, in the words of some, the most popular writer of her time. Radcliffe routinely tantalized readers with seemingly supernatural events but then gave them earthbound explanations. In 1826, a critic looking back at Radcliffe's novels first wonders why someone as talented as her "should, in all her works intended for publication, studiously resolve the circumstances, by which she has excited superstitious apprehensions, into mere physical causes." He explains why this technique shouldn't work in fiction, but then says that it "sets off, in the strongest light, the wizard power of her genius"—after all, readers loved what she was writing. Indeed, early in the next century, in a book titled Apparitions; or, The Mystery of Ghosts, Hobgoblins, and Haunted Houses, Developed Joseph Taylor anthologized stories that follow the same outline: scary situations are shown to be the product of superstition, gullibility, or the imagination gone awry.[18] Some of the tales are introduced as true, but presumably many of them are not—or, at least, they are well-traveled folktales. The Deshoulières legend would have fit perfectly.

Obviously, there was an audience for such tales in the early 1800s, even if the real-life model for the protagonist had been dead for more than a century. The same had happened with Athenodorus. In fact, that span of time might have made these legends all the more compelling. A listener or reader could ask, "Who's around to say they didn't really happen?"

They may seem new, those TV shows where self-identified experts spend a night trying to locate something spectral  in a house or an old asylum. Technology aside, however, the practice goes back hundreds of years. Even the number of investigators, their questions, and procedures have been on the books for centuries. Those books, and accounts of those old ghost hunters, are the subjects of Tim Prasil's delightful new book, Certain Nocturnal Disturbances: Ghost Hunting Before the Victorians.

"Before the Victorians" is an elastic phrase. Prasil actually begins his story in Rome. Not the Rome of Pater and Symonds, but the Rome of Pliny the Younger (c. 61 CE – c. 113 CE). Prasil compares and contrasts first century BCE philosopher and ghost-buster or -breaker Athenodorus and materialist Antoinette du Ligier de la Garde Deshoulières (1638-1694). Athenodorus found the source of a haunted villa in secret murder and buried bones. Deshoulières exorcised a haunted chamber when she laid hands on... a rambunctious family dog.

Prasil continues his history with the hearty Cornish "ghost layers" of the 17th-18th centuries, men like parsons Polkinghorne and Dodge. They thwarted everyday smugglers, silenced shades of crying ladies, and sent coaches drawn by headless horses back where they came from. Stories about such men, Prasil shows, were always given decades after the fact. Often the border between memoir and tall tale, eyewitness and hearsay, was not strictly observed.

As Certain Nocturnal Disturbances proceeds, ghost hunting and its public accounts become part of nascent print culture. Joseph Glanvill (1636-1680) was the watershed figure. Among the hauntings he investigated, the Tedworth drummer is perhaps the most famous. A century later, Samuel Johnson joined his own salutary brand of common sense to a committee investigating events in Cock Lane.

Certain Nocturnal Disturbances covers a period usually given short shrift in standard histories. It also provides vital context into the period preceding the emergence of Le Fanu, Poe, and Gogol, fathers of supernatural fiction. As such, it is invaluable. 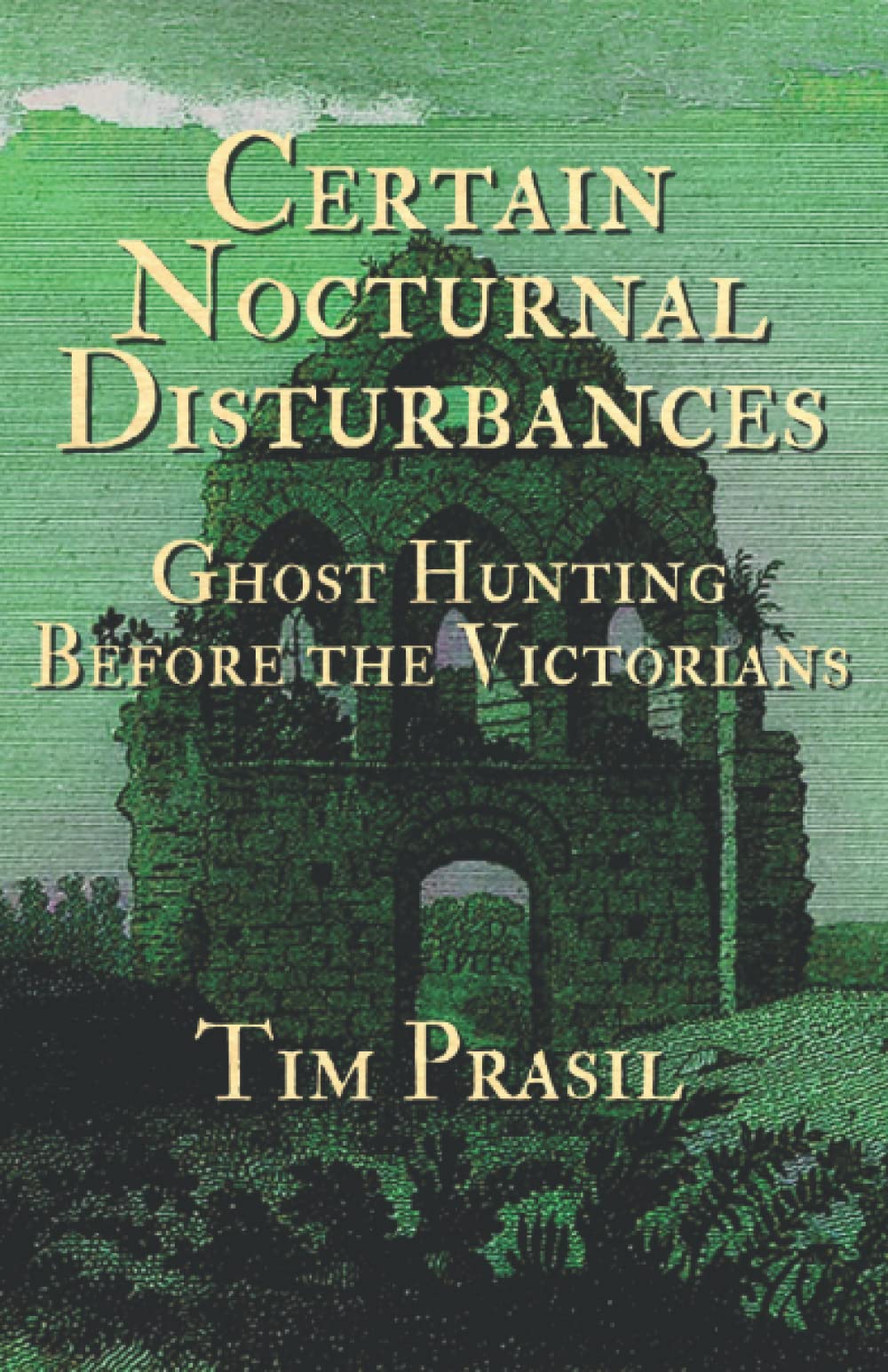 Posted by Jay Rothermel at 6:58 PM