Horror distilled: Notes on The Valancourt Book of Horror Stories

Starting Friday afternoon, I read The Valancourt Book of Horror Stories in three days. I read it cover to cover, starting on page 1 going all the way to 278. I did not skip any stories. They were all new to me, and of very high quality. Thoughtful editorial notes enriched and contextualized the stories. I highly recommend it. I have never read an anthology cover-to-cover before. 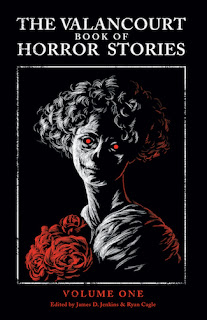 THE VALANCOURT BOOK OF HORROR STORIES


edited by James D. Jenkins & Ryan Cagle VALANCOURT BOOKS Richmond, Virginia 2016*Editors' Foreword • essay by James D. Jenkins and Ryan Cagle….Since 2005, Valancourt Books has made available almost 400 neglected classics by dozens of authors, most of them out of print for decades, sometimes even for a century or two. Our catalogue includes Gothic novels from the late 1700s and early 1800s, Victorian ‘penny dreadfuls’ and ‘sensation’ novels, vintage mystery and horror fiction from the 1 920s, ’30s and ’40s, rediscovered gay interest fiction from the mid-20th century, and more recent horror and science fiction from the 1970s, ’80s and ’90s. The idea behind this anthology was, “What if we distilled the best of each part of our catalogue into a single volume? What would a horror anthology spanning two centuries, and featuring only Valancourt authors, look like?”....we have for the most part tried to avoid stories that are widely available in other anthologies.Aunty Green • (1977) • short story by John Blackburn....Sir James Crampton, K.C.M.G. (awarded for services to the export drive) had many enviable chattels: machines and money, men and women, bricks and mortar, but there were other possessions no one would envy. An army of malignant cells was consuming his lungs and liver and emotion had already consumed his soul. Anger directed against an old, frail woman he hadn’t seen for thirty-­five years.....‘You did it on purpose, Jim. You killed my husband deliberately, and now you’ll pay for him. The oil stove’s nice and hot, so let’s go into the kitchen and have a feel of it.’ He’d paid all right. Sir James flexed his fingers. He had paid in full, and been too frightened to tell the teachers or the Child Care Officer what Aunty Green did to him. She was a witch who could read his thoughts and sear his brain as well as his body. He’d suffered patiently until breaking point came and knowledge came too. The realisation that, though Aunty dominated him mentally, he was physically stronger. That wonderful day when she failed to force his fingers against the paraffin heater. He picked the heater up and threw it at her.


....And why, she sometimes asked herself, didn’t she leave him? But what would she do if she did? Paul wouldn’t support her, and she’d been trained for no particular occupation. For the past twenty-­five years she’d known only this life – marriage to a man whose gratitude for her understanding had in no time worn threadbare. But for all of that, she thought, she could have put up with it – had it not been for his affairs. One after the other they had punctuated the years of their married life. And for that she was resentful – not just because of his infidelity and his rejection of her, but because he gave to those other women what he never gave, never had given, to her – not after the first few months of their courtship, anyway. Those other women – they were allowed to see only the best side of him – the cheerfulness, the gentlemanliness, the solicitousness. She, through her near-­total acceptance of the real person, the person they never saw, was doomed to live with it, warts and all.
The Head and the Hand • (1972) • short story by Christopher Priest


….It was his sudden and unexpected fame that separated us. No one had anticipated it, least of all Todd. Yet when he recognised its potential, he embraced it readily.


I was not with him when it began, though I saw him soon after. He told me what happened, and though it differs from the popular anecdote I believe it.


He was drinking with some friends when an accident with a knife occurred. One of his companions had been cut badly, and had fainted. During the commotion that followed, a stranger made a wager with Todd that he would not voluntarily inflict a wound on his own body.


Todd slashed the skin of his forearm, and collected his money. The stranger offered to double the stake if Todd would amputate a finger.


Placing his left hand on the table in front of him, Todd removed his index finger. A few minutes later, with no further encouragement from the stranger – who by this time had left – Todd cut off another finger. The following day a television company had picked up the story, and Todd was invited to the studio to relate what had happened. During the live transmission, and against the wishes of the interviewer, Todd repeated the operation.


It was the reaction to this first broadcast – a wave of prurient shock from the public, and an hysterical condemnation in the media – that revealed to Todd the potential in such a display of self-mutilation.


Finding a promoter, he commenced a tour of Europe, performing his act to paying audiences only.


It was at this point – seeing his arrangements for publicity, and learning of the sums of money he was confident of earning – that I made the effort of dissociating myself from him. Purposely, I isolated myself from news of his exploits and would take no interest in the various public stunts he performed. It was the element of ritual in what he did that sickened me, and his native flair for showmanship only made him the more offensive to me.


It was a year after this alienation that we met again. It was he who sought me out, and though I resisted him at first I was unable to maintain the distance I desired.


I learned that in the intervening period he had married….
The Ghost of Charlotte Cray • (1883) • short story by Florence Marryat


….He tried to hide the state of his feelings from Mrs Braggett, but she was too sharp for him. The simple, blushing Emily Primrose had developed, under the influence of the matrimonial forcing-frame, into a good watch-­dog, and nothing escaped her notice.


Left to her own conjecture, she attributed his frequent moods of dejection to the existence of some other woman, and became jealous accordingly. If Siggy did not love her, why had he married her? She felt certain there was some other horrid creature who had engaged his affections and would not leave him alone, even now that he was her own lawful property. And to find out who the ‘horrid creature’ was became Mrs Emily’s constant idea. When she had found out, she meant to give her a piece of her mind, never fear! Meanwhile Mr Braggett’s evident distaste to returning to business only served to in­crease his wife’s suspicions….­The Grim White Woman • (1801) • poem by Matthew Gregory Lewis [as by M. G. Lewis]


….If you bid me, fair damsels, my moral rehearse, It is that young ladies ought never to curse; For no one will think her well-bred, or polite, Who devotes little babes to Grim Women in White.The Terror on Tobit • (1933) • short story by Charles Birkin


….Ten o’clock. The firelight flickered eerily, throwing into brief illumination the faces of the two girls, and causing dark shadows to dart momentarily to the very edge of the crackling, salt-­­saturated fire. ‘Don’t you think we should try to sleep?’ Daphne suggested. ‘It’s after ten.’ ‘Yes. Daphne – I hate to admit it – but I’m frightened. Where’s Jean?’ ‘Over there to the left – about a hundred yards.’ ‘Is he asleep?’ ‘No, he said he’d . . . watch.’ ‘What for?’ ‘Goodness only knows. The Bogey, perhaps!’ Anne snuggled down more comfortably into her blankets. It was so easy to imagine things, she told herself. ‘Good night.’ ‘Good night.’ And the waves splashed softly on the shore. Two hours passed. Daphne stirred restlessly. Then she sat up. What was that? The air seemed to vibrate with a high singing sound – oddly penetrating, like the noise of a swarm of giant mosquitoes. It rose and fell in a monotonous cadence. Paralysed with foreboding she lay motionless. She knew she could not bear to listen to it alone for another moment….Furnished Apartments • novelette by Forrest Reid
‘It is cheap,’ I answered, ignoring his ironical tone. ‘On the other hand, it has several disadvantages.’


‘What’s the matter with it?’ Bingham persisted. ‘I mean, what is your real reason – apart from the several disadvantages?’


Bingham looked at me searchingly, but he only said, ‘Nothing more than that? Nothing definite?’


He sighed faintly – perhaps at my inability, or reluctance, to pursue a subject which lent it itself so invitingly to the kind of imaginative speculation he loved….Something Happened • short story by Hugh Fleetwood


….This most beautiful of all the swans had left the circle. It had swum right up to Mr Smith. And then the man had raised his arms – ‘only they didn’t look like arms any longer,’ Marek whispered. ‘They looked like wings. Great black wings, as if he were becoming a swan himself. A black swan. Or – an angel.’ He stopped, and waited for the others to jeer. They didn’t. They were looking at him, rapt.


‘And then the swan reared up out of the water and seemed to embrace Mr Smith, and – she became a woman,’ Marek whispered. ‘A white, beautiful woman like a swan. Like the moonlight. But still . . .’ Marek hesitated. He didn’t dare look at the others, but he was aware they were staring at him not even remotely with derision now but only, all three of them, with a pity they could scarcely bear. It was as if their hearts were breaking for him. Nevertheless, he had to go on. To tell them –The Tarn • (1923) • short story by Hugh Walpole
….He must get up and close the window. He drew his legs above the sheets and blankets and looked down. He shrieked. The floor was covered with a shining film of water. It was rising. As he looked it had covered half the short stumpy legs of the bed. It rose without a wink, a bubble, a break!


Over the sill it poured now in a steady flow, but soundless. Fenwick sat up in the bed, the clothes gathered up to his chin, his eyes blinking, the Adam’s apple throbbing like a throttle in his throat.The Gentleman All in Black • (1942) • short story by Gerald Kersh….‘Very well,’ said the visitor, quite unmoved. ‘I’ll be even more generous. Fifty million a second. Will you sell me one second of your time?’


The gentleman in black said, ‘Put the money away. Have no fear; it is real. And now I have bought one second of your time.’


Silence for a little while. Then they both walked to the window, which was a first-floor one, and I heard the stranger say:

‘I have bought one second of your time for fifty million francs. Ah well. Look down at all those hurrying people, my friend. That busy street. I am very old, and have seen much of men. Why, Monsieur Mahler . . . once, many years ago, I offered a man all the kingdoms of the earth. He would not take them. Yet in the end he got them. And I stood with him on a peak, and said to him what I say to you now – Cast thyself down!’****
Posted by Jay Rothermel at 2:28 PM No comments: