The dead might look in: Halloween III: Season of the Witch by Jack Martin


From Chapter 12 of Halloween III: Season of the Witch, Jack Martin's 1982 novelization of the film. [Martin dedicated the novel to Dennis Etchison ;-) ]. 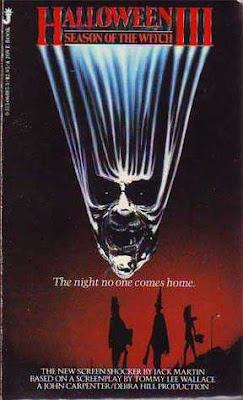 Posted by Jay Rothermel at 4:26 AM No comments:

Antique Dust by Robert Westall (1989) is a collection of seven supernatural stories.

The reader who appreciates the UK voice in the genre will find much to appreciate in Westall's collection.

The milieu is for the most part the antiques trade, with dealer (and our narrator) Geoff Ashden confronting both wily competitors and darker forces.

Westall does not skimp on characterization, incident, and complication. Most of the stories are novella-length.

In "The Devil and Clocky Watson" Ashden tries to teach the eponymous bounder Watson a lesson by giving him a clock that radiates malignity. He finds it for sale in the basement of a market:

....‘Geoff,’ came a low voice from the shadows behind us. My wife’s voice.

‘Geoff, what are you buying?’

‘A genuine Pike – got it for twenty-five.’

‘Then you can just get your money back. I’m not having that thing in the house.’

‘Can’t you see what it is? Are you blind?’ She dropped her parcels and scrambled up on the chair. I couldn’t help noticing her legs; which was odd. My wife has very pretty legs, but I’d lived with them for eight years. But now, as her black skirt rode up with the effort of scrambling, I noticed the plump smoothness of calf, the dimple behind the knee. I was seized with a fantasy of dumping the clock in the car, and driving home like a maniac and making love to my wife with the black clock ticking in the corner of our bedroom....

But nothing could have been further from her mind. She turned to me with a pale and outraged face.

‘Can’t you see the feet?’ I looked closely, and was surprised. Instead of the usual lion’s foot, they were gilded cloven hoofs. Her hand moved upwards, caught between a desire to show me and snaking revulsion. The gilded mask above the dial wasn’t the usual goddess or lion’s head, but a goat’s head with tight-curled horns and oval eyes. On the silvered dial was engraved the number thirteen – XIII – below the usual number one. And the corner-spandrels round the dial contained . . . miniature male genitals. Well-draped with vine-fronds, but definitely gilded male genitals.

In "The Doll" Ashden purchases a collection of dolls, one of which harbors a very nasty spirit, the familiar of a witch executed centuries before by Mathew Hopkins.

"The Last Day of Miss Dorinda Molyneaux" is, I think, the most Jamesian (and Campbellian) story in the book. There are a dozen characters and a compelling plot. The off-balanced nature of the local church where sitings occur is well-conveyed:

....This church felt wrong. I do not say this lightly. Dealers are undertakers of a sort. When a man dies, the undertaker comes for his body, and quite often the dealer comes for the rest. How often I have been left alone to break up the home a man has built up over fifty years, and sell the pieces where I can. As I break up the home, I know the man. I have known a cracked teapot yield enough evidence of adultery to satisfy ten divorce-court judges. I learn that he was mean from his boots; that trapped for ever inside the sepia photographs are seven of his children. From his diary, that he believed in God or the Devil or Carter’s Little Liver Pills. I deal in dead men’s clocks, pipes, swords and velvet breeches. And passing through my hands, they give off joy and loneliness, fear and optimism. I have known more evil in a set of false teeth than in any so-called haunted house in England.

....I couldn’t keep still in that place. It wasn’t just the cold. I thought I’d come prepared for that, with a quilted anorak and three sweaters. No, I kept having, not delusions, not even fears, but odd little anxieties . . . preoccupations. I had the conviction the walls weren’t vertical . . . or was it the floor, that seemed to slope down towards the middle of the nave? Certainly the floor was hollow; no one could walk on it and listen to the echo of his footsteps without realizing that. Then . . . the windows didn’t seem to be letting in as much light as they should. I kept going outside to check if the sky was getting cloudy, but it was still bright and sunny, thank God, and I went back feeling the better for it.

And that smell. Or niff, as Henry would have it. It wasn’t strong, but it was everywhere; you never got it out of your nostrils. The only thing I can liken it to was when I got in a new lavatory-bowl at the shop; it had to be left for the sealant to dry overnight, so the builder stuffed wet paper down the hole, but the biting black smell of the sewer filled my shop and dreams all night.

"The Dumbledore" is a flash-back to World War Two and a Royal Air Force base. But I wonder why Westall seems to suggest that UK and U.S. fliers served together? Or does he? The sharp outlines of previous stories in the book give way to a certain fuzziness here. And more than a little self-pity on Ashden's part.

"The Woolworth Spectacles," on the other hand, is a perfect and mirth-filled story of possession (or is it liberation?) by an inanimate object. Maude, thirty and still living at home with her widowed father, puts on the spectacles perhaps once used by Catherine de Medici. And that makes all the difference.

"Portland Bill" descends into predictability, but achieves notes of real poignancy. Its depiction of place is singular.

"The Ugly House" is a far more assured story. It draws on folklore to give us a story about a local devins-guérisseurs who is also an obstinate thorn in the side of his local government's Chief Technical Officer. Their battle of wits has many whimsically queer touches.

Antique Dust can be purchased here: 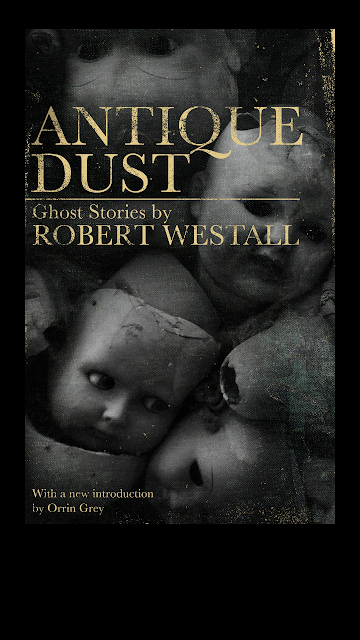 Posted by Jay Rothermel at 1:12 PM No comments:

Uncanny ecstasies: Ritual and Other Stories by Arthur Machen

In the last five weeks I have read nothing but the works of Arthur Machen. It has been a wonderful experience. I now understand why Machen's fans are so passionate. My least favorite Machen stories are the short pieces he wrote during World War One. But though they smack of bourgeois chauvinism, even in these stories the craftsmanship and authorial pleasure are evident.I paticularly appreciate Machen's late stories from the 1930s. They are not the exuberant tales of the 1890s, endlessly inventive and flowing with incident. But they are perhaps more architecturally arresting. 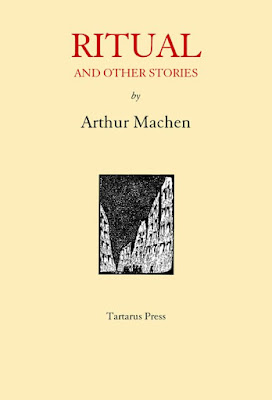 “The Story of Sergt. Richard Haughton and What Happened to Him on the Somme” (1916)....it was with a curious eye that I detected in the descriptions of the battle of the Somme something that broke through the calculated reserve of the correspondents. There are all the actualities; the mud and the grime and the ugly shell craters and the ground broken into ragged confusion, the cheerful commonplace of soldiers’ talk, the bits of slang, the gossip about eggs and bacon for breakfast before battle. All the usual matter of such correspondence is there; but there is something more. These witnesses confess, in spite of themselves, that they have seen things incredible and have mingled with immortals. They have been for a while in a world of supernatural ecstasy, in which agony has been joy, and destroying flames have blossomed into festal flowers, and death itself has become the supreme delight and rapture. By the Somme, on those low hills and in the shadow of those dark woods the common fashion of this world was changed; for a moment a hidden glory was manifested to the witnesses.“The Calvary of Azay” (1916)The brave French ally is acknowledged.“Drake’s Drum” (1919)A "Bow-Men" treatment for the Royal Navy.“A New Christmas Carol” (1920)....It was Christmastide. Scrooge was sitting before his roaring fire, sipping at something warm and comfortable, and plotting happiness for all sorts of people.“7B Coney Court” (1925)A real rarity among Machen's stories: the tale of a haunted chamber. And very cleverly executed.“Munitions of War” (1926)A reporter's memoir of a ghostly, but patriotic, wartime night.“The Gift of Tongues” (1927)Several strange anecdotes about people speaking in languages they do not know precedes a story about a Methodist minister who (in a trance) performs a Latin mass on Christmas morning.“The Islington Mystery” (1927)A murder mystery. Machen gives us several anecdotes about odd killings before narrating the unfortunate actions of a London taxidermist married to a ptarmigan. “Johnny Double” (1928)A dry, droll tale of a boy given to visions and able to appear two places at once. Only in adulthood does the most dramatic vision make sense.“The Cosy Room” (1929)A very un-cosy story of murder and the hysteria of the hunted man.“Awaking” (1930)A wonderful evocation of the world seen with a child's eyes, and dismissed contemptuously by adults.“Opening the Door” (1931)A masterful late story in the tradition of "The Shining Pyramid."“The Compliments of the Season” (1934)'....There is a prehistoric stone, a menhir, beside the path. The flat limestone was nearly covered with green moss, and as I looked, about half a dozen small birds came flying with moss in their beaks, and filled up a bare patch. They had made—I saw it, mind you, and I saw sparrows putting the last touches to it—a perfect little figure, like a doll, lying in a cradle of moss; made out of twigs of evergreens, and bits of straw, and reeds, and flowers. And on each side of this doll, they had stuck those two lilies from Mrs Voyle’s greenhouse. They looked like candles....'“The Dover Road” (1935)A great story about a haunted house, Morton Grange, psychic investigators, and the disappearance and reappearance of Sir Halliday Stuart.“The Exalted Omega” (1936)This is a fine example of Machen's gift for presenting the isolated elements of a collage, then allowing the reader to assemble it, then telling the reader the facts are at best unreliable. The story requires patience and rewards several re-readings.“The Tree of Life” (1936)The vigour and authority of Machen's late stories nearly latches the creative energy and dynamism of his work in the 1890s. I would place "The Tree of Life" in the top five of any list of Machen stories I treasure.  I have read it four times in the last month, and the story delights me every time. The writer gives us a story, building suspense and a weird atmosphere of dread and pathos. Then he retells the story from the "other side of the board," and it takes my breath away each time.“Out of the Picture” (1936)A sovereign and cunning horror story set in the forgotten little side streets and peculiar steps of London.“Change” (1936)Certainly a weird story to match if not surpass Miss Lally's fraudulent "Novel of the Black Seal." I'm re-reading it tonight.“Ritual” (1937)The uncanniness with which Machen imbues setting and anecdote in this short story are unforgettable. Children, among themselves and unsupervised, play games for mortal stakes.***Jay27 October 2017
Posted by Jay Rothermel at 1:21 PM No comments: