Better Out Than In: Think Yourself Lucky by Ramsey Campbell [2014]

Ramsey Campbell's 2014 novel Think Yourself Lucky is a comedy of manners. And lack thereof.

Office worker David minds his manners so much he becomes convinced his doppelganger Lucky Newless is killing the people who offend him with their abrasive lack of patience and consideration. Lucky also seems to be bragging about it online on a blog called Better Out Than In.

Are the killings really murder, or simply coincidental fatal accidents?

David has grown up suppressing his anger at the way people treat each other. His parents are social workers dealing with juvenile delinquents.

Chapters centering on David are told in third-person passive-voice. Every conversation he has with family and coworkers seems also to comment on buried facts and events David is struggling to ignore and forget. Lucky's chapters are told first-person, and Campbell really bends the stick in these to implicate readers in Lucky's fury, contempt, and violence.

Most of the killings are ghastly deadpan comedy. Who could laugh at the sight of an obese obnoxious blowhard on a mobility scooter being driven at top speed into traffic? Turns out we could, because that's how effective Campbell is in making us Lucky's accessories. Raging fury at the rude arrogance of one's fellow man is everywhere just below the surface.

Especially for someone like David, who denies himself expression of his own frustrations, and denies himself a synthesizing artistic outlet to aesthetically transform his fury.

"When I turned adolescent I was afraid I'd start being like the teenagers my parents had to cope with, so—"

"Poor David. You ought to have been able to let go at that age." With a smile not entirely free of wistfulness Stephanie said "You could a bit more now and then."

"Don't let it spoil our day. Just forward it to the appropriate department. Anyway," she said to return him to his subject, "you were being a teenager."

"Yes, and so I wouldn't be the wrong kind I brought him back."

"I wouldn't call him that. More like bad company. You'll laugh, but I must have been trying to make myself think he wasn't a childish idea, so I gave him a last name."

"What did you call him?"

"Mr Newless, and don't ask me why. It didn't seem to have anything to do with me." For no reason he could think of David wondered if this was the first time he'd ever spoken the name. "I ended up using him when I was tempted to do anything I thought my parents mightn't like," he said. "He caused all sorts of mayhem, but only in my head. In a while I convinced myself I was what they wanted, and that got rid of him."

"So why were you thinking about him last night, do you think?"

"What I've just told you about, that wasn't the last time I called him up.

"You're making him sound like some kind of demon, David."

"Well, he wasn't." David stiffened so as not to yield to an unexpected shiver. As he pulled the quilt around them both he felt like a child trying to take refuge in bed. "He was just something I made up," he insisted. "And I did again while I was at university."

"I'd have thought you would have broken out of yourself there at least."

"I had fun, don't worry. It's a good thing I did, considering how hard I worked as well and where I've ended up."

"We have to take the best jobs we can get, don't we, even if there's more to us."

"There isn't that much more to me." He hoped Stephanie realised he wasn't saying the same about her. "The problem was," he said, "maybe I had a bit too much fun."

She made a joke of looking apprehensive. "What am I going to find out about you, David?"

"It was the only time I got into drugs."

"Well, they're out of your system now, and you needn't think I didn't. I shared a few bongs back then and ate the odd mushroom."

"I did all that too. I even had a year on cigarettes. You wouldn't have known that, would you?" For a moment David managed to feel he was sharing a secret, but he was too aware of keeping another. "Only once I went too far," he said.

"You're back now, though. What did you do?" Stephanie murmured and inched closer.

"I don't think any of us even knew what it was called. Give us a pill and we'd swallow it if it was something new that was going round the campus."

"Maybe that's how we had to be to grow into who we are now. So what happened, David?"

"I still don't know exactly what it did. Maybe someone at the university designed it, but we never found out who. It wasn't around very long. Maybe whoever made it panicked because they were afraid of being found out."

"What happened to you, I was asking."

"I know." David was aware of fending off the memory. "A few of us took it one night in somebody's room," he said. "Everyone else was happy just to lie around and have visions, but it didn't work that way for me. I had to get out."

"You aren't claustrophobic now, though. I suppose some drugs can make you feel you are."

"It wasn't just that. I was trying to get away from what I'd done."

"You couldn't just let go and enjoy it."

"It made me feel I couldn't, so I wandered off the campus on my own."

The memory was growing as vivid as any of the visions he'd wished he hadn't had. The old buildings of the university had glowed like bones in a fire, but he'd seen that the new blocks lit by white globes on stalks were fossils of the future. As he crossed a road, the cars that glared at him with their great eyes had seemed poised to multiply their speed the instant he stepped off the kerb. He'd had to walk through far too many streets composed of display cases furnished with a selection of people, unless the images within the frames were arcade games, since the figures didn't move until he stared at them. Despite the January chill, he'd felt his sweaty feet squelch at every step. At last he'd come into the open on the far side of a stile, which was as cold as metal and transformed his hands on it into wood. The electric amber sunset of the town had faded from the sky he'd left behind him, and eventually he'd lain down in the middle of a field that frost had turned into enormous spiky half-buried ribs. He'd felt the skeleton splinter beneath him, and then he'd been aware of nothing except the sky, where the moon had sharpened the edges of clouds as it crept from behind them. "Where did you end up?" Stephanie said.

"Somewhere out in the country, I can't tell you anything else."

"Is that where you met your Mr Newless?"

"I didn't meet him. I never have and I wouldn't want to."

"Gosh, I've never heard you sound so fierce. I was only thinking you might have thought you did when you were out of your head."

"Not even then," David said, which felt like trying not to put the memory into words. He'd lain on the icy shards of the world and gazed up at the moon, the half that shone like snow and the rest that he couldn't be sure he was seeing, a rounded segment of the night like a denial rendered solid. The frigid light had gathered all around him until he'd started to believe that nothing was alive except him—that nothing else was even real. The notion had closed around his mind, eating away at his sense of his own reality, a threat that had terrified him so badly that he'd clutched at the only solution he could think of. "It's exactly what I didn't do," he told Stephanie. "I managed to imagine everything was happening to him instead of me."

"It must have." All the same, for a moment if not longer—it had felt like the rest of his life—he hadn't known where or even who he was. Until he'd succeeded in recalling his own name he'd felt as if he had left his body, which had frozen beyond his ability to revive it, unless the dead light had entirely erased it. At last he'd rediscovered the use of his muscles and had jerked the shaky puppet to its feet, and it had jittered slithering across the blanched field towards the false dawn of the town—the amber glow that, however artificial, had seemed less dead than the moonlight. As he'd run back to the room he'd set out from, the breaths in his ears had sounded like the world returning to life. When he'd fallen back into his chair nobody had bothered wondering where he'd been, and he'd found his insignificance unexpectedly reassuring. He must have been over the peak of the drug by then, since he'd been able to close his eyes and dream in great detail of countries he wanted to visit even though he never would. "It got rid," he said.

"Or you thought it had."

David shifted uneasily, and the quilt slipped off their shoulders as if somebody were tugging it away from them. "Why only thought?"

"Weren't you dreaming about him last night?"

"He's never in my dreams that I'm aware of." David was conscious of having far too much still to tell. "Do you want a coffee?" he found he would rather ask. "We ought to be moving if we're going for a drive before you've got to head for work."

When a new plateau of balance is eventually achieved, the narrative moves from past-tense to present-tense, Campbell's sharpest stylistic tool.

I was reminded of Waugh's works, like A Handful of Dust, "Mr. Loveday's Little Outing," and The Loved One. The same unappeasably distant tone of classical voice, the same emotional seduction of the reader into taking joy at the meting-out of just desserts. 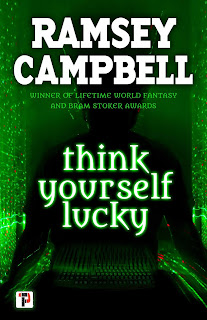