WHEN the guy with asthma finally came in from the fire escape, Parker rabbit-punched him and took his gun away. The asthmatic hit the carpet, but there'd been another one out there, and he landed on Parker's back like a duffel bag with arms. Parker fell turning, so that the duffel bag would be on the bottom, but it didn't quite work out that way. They landed sideways, jokingly, and the gun skittered away into the darkness....

I read the first three Richard Stark novels about master thief Parker two decades ago. Then I got diverted onto the main road of Donald E. Westlake's novels about Dortmunder. Then, as they say, way led unto way.

This morning before work I finished The Mourner (1963), the fourth novel about Parker.

The thief is perhaps slightly sentimental in this tale. For instance, after being betrayed by a partner, he hangs around a crime scene to ensure both quick medical treatment for himself, then bargaining for significant treatment for his gut-shot comrade, Handy McKay. I can't help thinking The Man with the Getaway Face would have walked away and let Handy take his own chances.

The Parker novels are all organized on the same strict outline and time table, like Von Schleiffen's war plans.

Part One starts off in the middle of complications with a tough and violent action scene. Then we go back and forth a few chapters, catching up to that opening jaw-dropper.

Part Two gives us the heist in several chapters, ending with the double cross.

Part Three in a Parker heist novel is always told from the point of view of a character out to thwart Parker. Usually the guy who thought he could get away with stabbing him in the back. (In The Mourner this is Inspector Menlo, part of the secret police of a small Carpathian Stalinist republic. Once Menlo has his hands on the stolen statue of a Medieval mourner, he puts a bullett each in Parker and McKay. Too bad he used a .22 Derringer.)

Part Four: we are back with Parker. We follow him from the moment of double-cross until the end of the book.

Stark/Westlake's best scenes take us from a big picture to a small one.

Here Parker and McKay break into Menlo's house (early in the story when they are still partners):

….ON THAT block was a row of two-family houses, built before the war. The one they wanted was on the corner. What the Outfit used it for normally they didn't know, but right now Menlo was living in the downstairs flat, and the upstairs flat, according to Ambridge, was empty.

They'd stopped off on the way to get rid of the truck and pick up their own car, where Handy had left it earlier in the evening. The car was a Pontiac, two years old. It was hot, but not on the East coast, and the papers on it were a good imitation of the real thing.

Handy was driving, and a block from the address he took his foot off the accelerator. The car slowed. There were tail-lights ahead. A car was double-parked in front of the house they wanted, lights on and motor running.

"Go on past," Parker said. "Then around the block."

Parker looked the car over on the way by. It was a black Continental. The man at the wheel wore a chauffeur's cap and was reading the Star.The car carried New York plates, and they started DPL. Diplomat. Beyond the car was the house, the ground floor all lit up, the upper story dark.

It was almost three o'clock in the morning. The Continental out front with diplomat plates at three in the morning wasn't a good sign. Parker said, "Hurry around the block. Park on the cross street."

"I'm ahead of you," Handy answered. "What did that guy say Manlo was? A defector?"

They left the Pontiac half a block from Bradley, on the side street that flanked the house they wanted. This way they could get to the back door without tipping the chauffeur in the Continental.

There was a white picket fence separating the back yard from the sidewalk, with a white picket gate. The gate opened with no trouble and no squeaking, and they went across the slate walk to the stoop and up on to the back porch. The kitchen door stood wide open, and the storm door was closed but not locked. The kitchen was empty, but casting bright, wide swatches of light out through the window and doorway.

Handy's touch with doors was the lightest. The storm door never made a sound. They stood on linoleum with a black-and-white diamond design, and listened. The refrigerator hummed, and on a different note the circular fluorescent light in the ceiling also hummed. The rest of the house was silent. Bright and silent.

An open door to the right led to the bedroom, but with no bed in it. The ceiling light was on two seventy-five-watt-bulbs unshielded and in the glare the bedroom was a bleak cubicle full of unmarked cardboard cartons, stacked along the walls. The Venetian blinds were down across both windows.

A hall led off the kitchen. Midway along it was a brace of doorways facing each other. The one on the left opened on to the bathroom, gleaming with white tile and white porcelain and white enamel, with a brightly burning white fluorescent tube over the mirror above the sink. The doorway on the right led to another bedroom, this one containing a bed. This too was garishly lit, and looked like a whore's crib. A double bed dominated the room, covered by a cheap tan spread, and without pillows. A scarred dresser stood on the opposite wall, and the bed was flanked on one side by a black kitchen chair and on the other by a small wooden table containing nothing but a chipped ashtray.

At the end of the hall was a dining-room, lit by a rococo ceiling fixture of rose-tinted-glass. The cream-and-tan wallpaper was a faded pattern of ivy and Grecian columns. Centred beneath the light was a poker table, round and covered with green felt, with eight wells around the outer edge for the player's money and drinks. Eight chairs crouched around the table, on a faded Oriental rug. There was no other furniture in the room.

The third bedroom, off the dining-room, was apparently the one Menlo was using, for there was clothing draped on the chair, hairbrush and cuff-links and other things on the dresser, and an expensive-looking alarm clock on the night table.

A wide archway led from dining-room to living-room, which was furnished in an old-fashioned way, in dark colours and heavy overstuffed furniture.

Every light in the house was on, and the Continental still waited out front, though all the rooms were empty.

Handy caught Parker's eye, and pointed at the floor. Parker nodded. Still moving cautiously and silently, they went back to the kitchen. The first door they tried opened on to the pantry, but the second showed cellar stairs angling away to the left. Light came up from below, and the sound of someone talking, softly and conversationally. And there was another sound, a steady scraping and chuffing, slow and rhythmic.

Handy already had the.380 out. Parker unlimbered the Terrier, and led the way down. The stairs angled sharply to the left, and then went straight down the rest of the way, towards the rear wall of the house, so that most of the basement was behind Parker as he came down. He came halfway, then crouching on the stairs, ducked his head under the banister and looked back at the rest of the cellar.

Three hundred-watt bulbs were spaced along under the I-beam that ran down the middle of the ceiling. All were unshielded, and all were lit, throwing the dirt-floored cellar in stark, almost shadowless, relief. An old coal furnace hulked on one side, with its squat oil converter crouched in front of it. Several barrels of trash were standing alongside two deep metal sinks.

Down at the other end, the fat man was digging his own grave.... 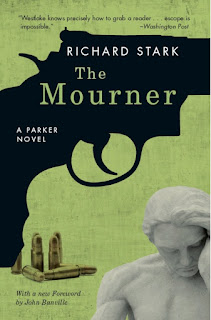 Posted by Jay Rothermel at 9:00 AM