The bad news first: Grofield is back as Parker's first choice for a team to gut the gambling island of Cockaigne, 60 miles south of Galveston.

Grofield is a clever cluck who comes and goes like a virus through the Parker novels. He seems like an escapee from a lightweight caper penned by Donald E. Westlake or Lawrence Block. An actor who supports his theatrical career by cold-blooded and murderous crime? Yock, yock, yock.

Still, a Stark heist plot can overcome most such failings.

The owner if the casino on Cockaigne is - and I am not making this up - Baron Wolfgang von Altstein. He has sold the Soviets and the Cubans on the idea that he is building an intelligence network, but he's actually a Sturmabteilung alumnist in it for himself.

Both the U.S. government and the outfit want Baron von Altstein and his operation stopped. (Shades of Operation Mongoose).The outfit hires Parker to do it. The U.S. government goes along, hoping to double cross Parker when the heist is over.

This is very far from a midwest armored car hijacking.

Poor Salsa. Too good a man to be thrown away like this. 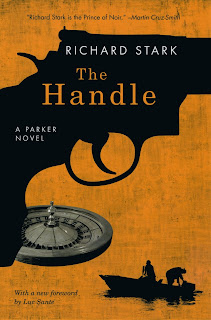 Posted by Jay Rothermel at 8:45 AM