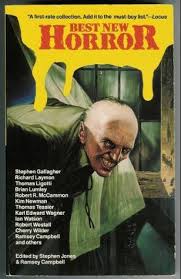 It is not a riff on Aiken's sublime "Silent Snow, Secret Snow." But it will speak tartly to anyone who grew up anticipating the profoundly liberating effect of a "snow day" in their youth. Covid-19 and Zoom have now, I imagine, made snow days obsolete.

"Snow Cancellations" begins with two boys talking on the phone and listening to alerts on their local AM radio station.

"What station you listenin' to?" Kevin asked. Jamie could hear him tuning a radio across the dial, a jumble of stations fading in and out.

"Got it," Kevin said, and Jamie could hear the radio sound over the phone slide into agreement with his own radio.

". . . as storm-related information continues to come in, so stay with us and we'll keep you up to date on what's happening here in southern New Hampshire on this miserable day. Have another cup of coffee for me, won't you? Time now at Storm Center Radio is 7:28, and we have some basketball scores for you—ah, but first, this just in, schools in Londonderry are closed, that's Londonderry, no school, all schools. And I'm told now that schools in Concord and Laconia have been closed after all. That's Concord, no school, all schools, and Laconia, no school, all schools. Here's another one just in—Saint Anselm's College is closed today, both day and evening classes. We'll update you on the whole list of cancellations at 7:40, but first here's Tom Michaud with local sports news. Tell us, Tom, what happened with that basketball game at Rivier College last night?"

"Hey, Jamie, this is neat. The whole town's covered up with snow."

Jamie had been to Kevin's apartment building across town several times after school or on Saturdays, and knew that you could see just about the whole town from Kevin's fourteenth-floor living room window.

Burleson spends the first half of "Snow Cancellations" creating a perfectly observed hour of everyday life. Then:

Outside Jamie's parents' bedroom window, the snow seemed heavier, more insistent, every minute. It brushed against the frosty panes with jittery fingers of white, worrying at the glass, whispering. He could scarcely see far enough out now to make out the pines, except when the snow would lift a moment, rearranged by the wind. He ventured a remark to Kevin, bracing for the taunting reply it would bring.

"Something about the snow's kinda eerie, isn't it?"

Kevin was slow in replying, and, surprisingly, he said, "Yeah. Kind of."

What do you know, Jamie thought—he feels it too. "Kevin, can you see the mill?"

"Yeah, just barely. It's a long way off. I can just see it. Looks like a ghost."

". . . and Storm Center Radio will bring you all the details throughout the day, so stay tuned. I'm Rick Phillips for Radio 1360, Manchester, your information station for southern New Hampshire." Then music, some whimpy-sounding song like the old-fashioned stuff grownups listened to.

Odd, the way that voice had sounded. Something—different about it.

That voice on the radio, filled increasingly with menace, seems to lick its chops at an accumulating list of cancellations.

"A little hit of Mel Tormé for a snowy morning, nice, don't you think? Time now is 8:25, that snow keeps coming on down. And do we have some new cancellations for you!"

Jamie drew the sheets closer around his legs, feeling suddenly colder. The wind outside the window moaned and shifted the snow in crazy-looking patterns. That voice was different, and he didn't like the way it sounded. It was—what? A little like some kind of cartoon-character villain, sort of half-mocking like. Sort of . . . unreal.

"Here's the big one, friends, listen carefully." He pronounced carefully the way Bela Lugosi might say it in a Dracula movie, drawing the first vowel out long with a final lilt. "Here it is. Merrimack Valley Mill is cancelled." The radio went immediately to music again, some love song.

For a long while neither boy spoke. It was Kevin who finally broke the silence. "Jamie?"

"Jamie, I'm lookin' out the window and somethin' looks funny."

"What do you mean, something looks funny?"

Kevin waited a long time before answering, and when he did, he sounded awestruck. "This ain't right. I can see Pennacook Park."

"So what's the big deal about seein' Pennacook Park?"

"I never could see it before. Not from here."

"No, no, I'm tellin' you, Jamie, I never could see it before. I can barely see it now, just when the snow lets up a second, but it's there, all right. And"—Jamie could hear him draw in a shocked-sounding breath; Kevin, Kevin sounding shocked, Kevin who never sounded shocked—"and I just figured out why. It's because the mill ain't there."

Jamie laughed, but the laugh came out a little hollow. "Give me a break, Kevin. Of course the mill is there. What are you talking about?"

"Look, Jamie, I ought to know where that mill is, from my own window, and I'm tellin' you, it ain't there. That's why I can see the park, because the mill ain't hidin' it anymore."

Outside Jamie's parents' window, the wind whooped up into a deranged-sounding howl and threw snow against the panes. "Kevin, what are you saying? My dad works there."

Kevin was quiet for a long time, then said, "So does mine."

I anticipated that "Snow Cancellations" would develop into a cozy weather catastrophe like something out of John Christopher or Roland Emmerich. No such luck for Kevin and Jamie.

"Snow Cancellations" is a fine story in any season, and worthy of the company.