Joe Sheer from Omaha, retired but long a sort of world wide web server relaying messages between North American heisters, is facing trouble in his old age in the town of Sagamore, Nebraska.

You got to excuse an old man. I need help. You know I never in my life pushed for anybody to get me out of any trouble, but I'm getting old and rusty and scared. If you want to tell me to go to hell that's okay, but if you got the time and inclination I could use a hand up here. I don't promise you any profit out of it at all. In fact I don't see how you could break even on travel expenses unless I pay for them, and I will. If you got a woman, bring her along and I'll pay for her too. A young hardcase like you could take care of this problem of mine with no sweat, and sit around and drink beer a while afterwards. This isn't trouble I would have thought twice about ten years ago, but now is another story. Anyway, if you're coming, just come, and if you're not then don't and I won't hold it against you. Whatever you do for God sake don't call me on the telephone.


The source of Joe's trouble is Sagamore, Nebraska's murderous and dumb police chief, Abner L. Younger. Well, Younger is stupid, but lethal to those he thinks are not already in his control. (He's no Lou Ford.)

Younger thinks Sheer buried over a million from a lifetime of heists at his Sagamore property. It never occurs to Younger that men like Sheer could run through loot, survive hand-to-mouth, and end up with nothing.

Parker takes an interest in all this because he thinks he needs to suss-out his own exposure. Did Sheer give Younger the names and aliases of old comrades?

The Jugger (1965) by Richard Stark is not on a par with the first three novels about Parker. As with The Mourner (1963), Parker seems like the old self-contained shark, but comradely proclivities keep pushing to the surface. I suspect by the fourth and fifth book in the series, Stark/Westlake could see the corner he painted himself into with the character.

Back to the drawing board. 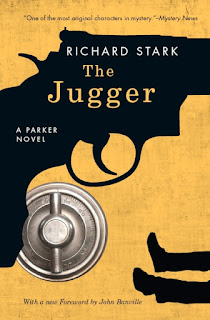 Posted by Jay Rothermel at 8:57 AM