Connell's novels about India and Walter Bridge are now at the top of my list.

The supreme scenes in Mrs. Bridge, and there are many, revolve around the frustrations and contradictions of parenthood. My favorite: an angry and frustrated son who builds a tower of junk impervious to destruction by everyone except  the fire department.

Connell's Bridge novels cover the period from Italy's invasion of Ethiopia to just prior to Pearl Harbor. There are no false notes of soap-opera bathos. The slow accumulation of funny, poignant everyday incidents conveys a powerful sense of years passing and personalities developing.

Mrs. Bridge, as the children grow, finds time weighing heavily on her hands. Most of her friends feel the same way. Most bear it the best they can; others are not so fortunate.

In both novels Connell presents a serious treatment of the characters and their milieu. There is no acid here, no ridicule, no "satire."

I want to present a chapter from each novel to show how beautifully crises are treated by Connell. 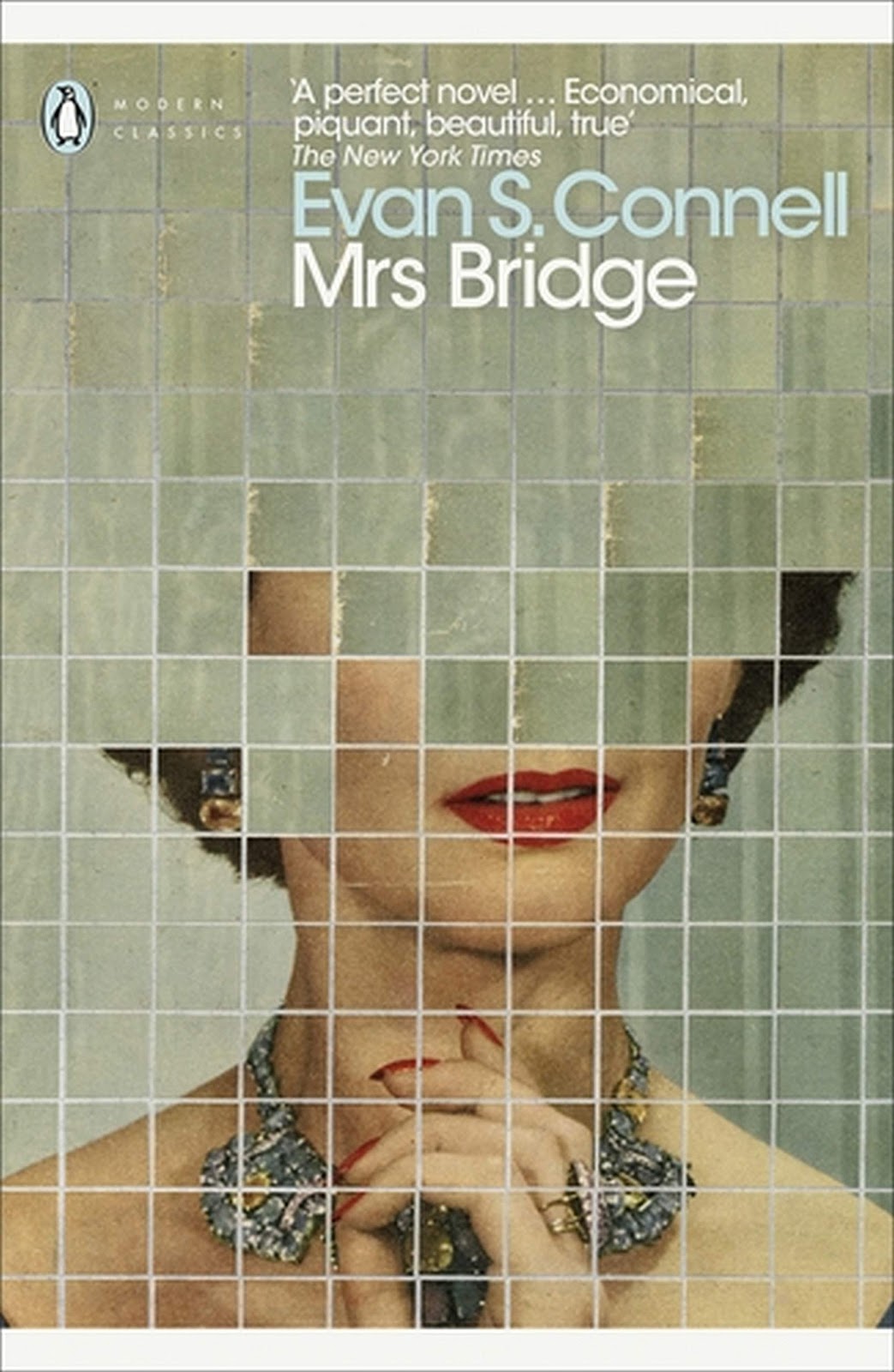 It was to Carolyn, though she was younger, that Mrs. Bridge was in the habit of confiding her hopes for them all. The two were apt to sit on the edge of Carolyn's bed until quite late at night, their arms half-entwined, talking and giggling, while across the room Ruth slept her strangely restless sleep—mumbling and rolling and burying her face in her wild black hair.

Mrs. Bridge could never learn what Ruth did in the evenings, or where she went; she entered the house quietly, sometimes not long before dawn. Mrs. Bridge had always lain awake until both girls were home, and one evening during the Christmas holidays she was still downstairs reading when Carolyn returned, bringing Jay Duchesne, who was now considerably over six feet tall and was doing his best to grow a mustache. In certain lights the mustache was visible, and he was quite proud of it and stroked it constantly and feverishly, as if all it needed in order to flourish was a little affection. Mrs. Bridge liked Jay. She trusted him. There were moments when she thought she knew him better than she knew Douglas.

"What's new, Mrs. B.?" he inquired, twirling his hat on one finger. And to Carolyn, "How's for chow, kid?" So they went out to the kitchen to cook bacon and eggs while Mrs. Bridge remained in the front room with the book turned over in her lap and her eyes closed, dozing and dreaming happily, because it seemed to her that despite the difficulties of adolescence she had gotten her children through it in reasonably good condition. Later, when Duchesne roared out of the driveway—he still drove as recklessly as ever and she was still not resigned to it—she climbed the stairs, arm in arm, with Carolyn.

Mrs. Bridge smiled again. She sat on the bed and watched as Carolyn pulled off the baggy sweater and skirt and seated herself at the dressing table with a box of bobby pins.

Mrs. Bridge looked out the window. "Why, it's snowing again. Isn't that nice! I just love snowy winter nights."

Large wet flakes were floating down and clasping the outside of the window, and the street light shone on the evergreen tree in the back yard.

"There goes a rabbit!" she cried, but by the time Carolyn reached the window only the tracks were visible.

"Yes, poor man. He didn't get away from the office until after seven and insists he has to get up at five-thirty tomorrow morning."

"I know, but you can't tell him anything. I've tried, goodness knows, but it never does any good."

"Oh," said Mrs. Bridge irritably, for the thought of it never failed to irritate her, "he insists we'll all starve to death if he doesn't."

Both of them were silent for a while, watching the snow descend.

"I do hope Ruth gets home soon."

"You know I don't like you to use that expression."

Carolyn split a bobby pin on her teeth and jammed it into her curly blond hair. "Well, what's the matter with her then? Who does she think she is, anyway?" She leaned to one side and opened the cupboard that belonged to Ruth. "Look at that! Black lace bras. Mademoiselle from Kansas City."

Presently the grandfather clock in the hall chimed twice, and Mrs. Bridge, after brushing Carolyn's cheek with her lips, went downstairs and into the kitchen, where she made herself some cocoa and moodily watched the snow building up on the sill. After a while she went upstairs again, changed into her nightgown, and got into bed beside her husband. There she lay with her hands folded on the blanket while she waited for the faint noise of the front door opening and closing.

She believed she was awake but all at once, without having heard a sound, she realized someone was downstairs. She heard a gasp and then what sounded like a man groaning. The luminous hands of the bedside clock showed four-fifteen. Mrs. Bridge got out of bed, pulled on her robe, and hurried along the hall to the top of the stairs, where she took hold of the banister and leaned over, calling just loud enough to be heard by anyone in the living room, "Ruth?"

"Ruth, is that you?" she asked, more loudly, and there was authority in her tone. She listened and she thought some delicate noise had stopped. The dark house was silent.

"Is there anyone with you?"

And then Ruth coughed in a prolonged, unnatural way, and Mrs. Bridge knew she was coughing to conceal another noise.

"Who's there?" she demanded, unaware that she was trembling from anger and fright, but there was only the sound of the great front door opening and shutting and seconds later the crunch of auto tires on the crust of yesterday's frozen snow as whoever it was released the brake and coasted away.

A cold draft swept up the spiral staircase. Mrs. Bridge, peering down into the gloom, saw her daughter ascending. She snapped on the hall light and they met at the top step. Ruth was taking the last of the pins out of her hair. She reeked of whisky and her dress was unbuttoned. Idly she pushed by her mother and wandered along the hall. Mrs. Bridge was too shocked to do anything until Ruth was at the door of her room; there they confronted each other again, for Ruth had felt herself pursued and turned swiftly with a sibilant ominous cry. Her green eyes were glittering and she lifted one hand to strike. Mrs. Bridge, untouched by her daughter's hand, staggered backward. 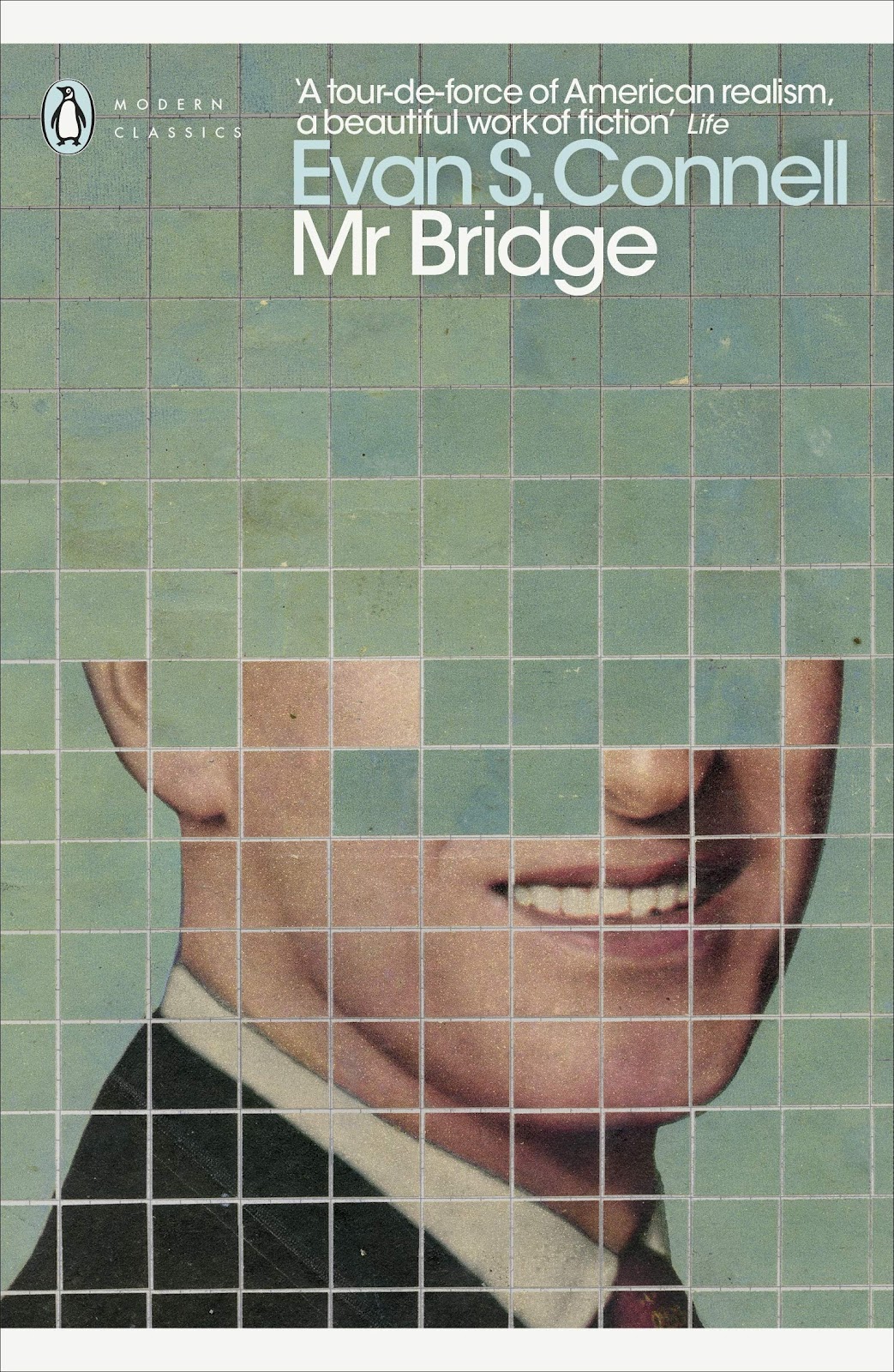 His eyes opened and focused quickly, because something was wrong. The house was silent. At his side his wife breathed deeply and calmly. He could not hear anything except the ticking of the grandfather clock in the hall and the wind soughing through the trees, but he thought somebody was downstairs. He got up, put on his robe and slippers, took a box of bullets out of the dresser, and emptied the bullets into his pocket. He slid his hand under the mattress and pulled out the gun. He loaded it and cocked it and started walking slowly along the hall, pausing every few steps to listen. He was standing at the top of the stairs when he heard somebody groan.

He placed one hand on the rail to steady himself and started down. At the bottom of the steps he raised the gun and looked around the corner into the living room. The drapes had been drawn apart. Moonlight spilled through the east window and he could see a man lying on top of Ruth. She opened her mouth and kicked her legs like a frog. The man lifted his head. He groaned again. She pushed at his face, and as mechanically as figures in an old film they rolled away from each other. She got to her feet briskly and pulled down on her skirt. She brushed the hair out of her eyes and stepped into her shoes. One of the sofa cushions was lying on the floor. She picked it up and dropped it on the sofa. At that moment the clock began to chime. Mr. Bridge wondered if he was asleep; he blinked and looked around, because he thought he remembered the sound of the front door closing. The man had disappeared.

Ruth was calmly buttoning her blouse, which was undone halfway to the waist. He gazed at her in disbelief. She ignored him and went on buttoning her blouse. He remembered that he had brought the gun; he looked at it and saw that it was in his hand, and the weight of it convinced him that he was awake.

"What were you planning to do?" she asked.

He put the gun in the pocket of his bathrobe and sat down in the nearest chair. It seemed to him that he had been a fool. He was a fool to suppose that he could prevent things like this from happening.

Ruth went on in the same sardonic voice: "He begged me to go to a hotel, but I wouldn't. So here we are. Here we are, you and I." She crossed her arms and looked down on him with an expression of indifference or contempt. "Promise me one thing. Don't let Mother know. It would probably kill her."

Mr. Bridge realized that he was attempting to cry, but he had not cried since he was a child. He began to cough.

"Things are different now," she said, and she approached and brushed his ear with the tip of her little finger, but her face was hard. Her eyes were not asking forgiveness.

"No," he said, shaking his head. "Some things never change. Love and respect and human decency—these never change. Your mother and I have these things."

"No," he said firmly. "Without these none of us could go on living."

Ruth shrugged. She did not seem to be listening. He looked up at her helplessly.

"What about this man? Are you planning to be married?"

"Oh God," she murmured with a gesture of impatience. "I never saw that ass before tonight. Times have changed since you were young." Then she added, "And besides, you've probably forgotten how it used to be."

He shook his head again. "I have not forgotten what it means to desire a woman. I am still able to feel great desire for your mother."

Posted by Jay Rothermel at 7:02 PM