The editor of Second Cthulhu Mythos Megapack has spread their net widely, finding few gems but many competent attempts at cosmic horror.

The Isle of Dark Magic by Hugh B. Cave

....I have said before that the thing was a woman. It was. Now, as I advanced fearfully toward it, fascinated by the almost life-like manner in which it studied me, I could not repress amazement at the uncanny perfection of it. If Jean Lanier had made this, then Jean Lanier had been truly an artist! For the woman was a creature of marble, so delicately and expertly sculptured that every portion of her exquisite form could have been mistaken, even at close range, for living reality. Naked she was, and sitting in an attitude of meditation, with her extended hands holding the metal dish which I had seen before. And I knew intuitively, even as I wondered at the uncanny loveliness of her, that there was something terrible, something wrong, in the way she was sitting there.

Two small time crooks fight over found treasure of unknown origin. Petaja does a solid job here pushing the drama forward with dialogue. This is a slick, competent tale  ready for Night Gallery or Outer Limits.

"....What makes you think it ain't just another chunk of drift out of the sea, eh?" Aino's eyes approached the thing in Big Tom's hand timidly, but once there they clung, pupils dilating. His mouth curved and then he spoke, with a new dignity.

"It isn't drift, Tom. It came out of the sky, not out of the sea. It came down in the storm. Sometimes they send something down, or come down themselves in different shapes. Charles Fort calls the things from outside thunderstones. He knew about them, but he didn't know that—"

Big Tom interrupted with a snort. "So now you're smarter'n them guys who wrote them books, eh? Think you're pretty cute, don't you, jerk? Pretty smart, eh?"

The Intruder by Emil Petaja

A shopkeeper talks to a stranger on a park bench.

"Were you ever told, as a child, that you must not attempt to count the stars in the sky at night—that if you did you might lose your mind?"

"Why, yes. I believe I've heard that old superstition. Very reasonable, I believe—based on the assumption that the task would be too great for one brain. I—"

"I suppose it never occurred to you," he interrupted, "that this superstition might hold even more truth than that, truth as malignant as it is vast. Perhaps the cosmos hold secrets beyond comprehension of man; and what is your assurance that these secrets are beneficent and kind? Is nature rather not terrible, than kind? In the stars are patterns—designs which if read, might lure the intrepid miserable one who reads them out of earth and beyond…beyond, to immeasurable evil.…Do you understand what I am saying?" His voice quivered metallically, was vibrant with emotion.

Verse whose anatomy of influence goes back to Tennyson's "Kraken."

More fan-service than serious fiction. Narrator and wife receive a square of parchment in the latest issue of Weird Tales magazine. The parchment initially carries indecipherable script, but helpfully it soon turns into English: a formula to recite to recall Cthulhu & Co. to life.

"What if the holy water had not worked? 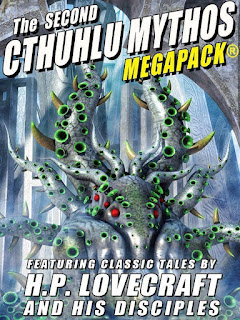 Posted by Jay Rothermel at 2:31 PM