Swift to Chase by Laird Barron (2016) contains stories of very high quality. The first three are the weakest. The remainder, often subtly weaving interconnections among themselves, are fine depictions of working-class characters confronting forces - human and otherwise - of cosmic nihilism.

An oddly anticlimactic story of a carnival cursed apparently by lycanthropy. The first-person tone feels a little too smart-aleck and genre-knowing. The carnival details strike as well-observed, but perhaps Barron is a little too in love with his protagonist's voice?

"LD50" is filled with unearned jargony pseudo-hardboiled first-person narration like:

....an olive gray camo set of matching pants and coat; a sniper outfit webbed with netting and faux vegetation. Gave me the chills to see it bundled there by the spare tire like some discarded rubber monster suit from a Universal sound stage.

....I staggered inside the mom and pop on Main Street and drank two quarts of lime Gatorade while Methuselah the Clerk observed my antics with gap-toothed bemusement.

"LD50" is a hymn to vigilantism, and its double-entry moral arithmetic leaves a bad taste in the mouth.  Lee Child's novel Echo Burning is a much more fruitful and satisfying approach to similar material and landscape.

A superior collage of murder and mayhem around Eagle Talon, Alaska. Plenty of pathology and gore.

Andy Kaufman Creeping Through the Trees

I first read this story last year in the anthology Autumn Cthulhu. I had seen it hyped for several years, and thought very highly of it. Though not approaching the strengths of "Mysterium Tremendum" and "The Men from Porlock," "Andy Kaufman Creeping Through the Trees" does a good job delineating both the leech-horror element and the dead-end lives of small-town teens in Alaska. (But let's face it, no story could be as good as this story's title.)

A strong, well-executed adventure in the hard-boiled vein. An investigator is hired to find an actor in the wilds Alaska. What he finds instead is the dark crimson hole at the heart of existence. Barron's first-person narration and plotting are confident and compelling. The cold and exposure scenes in Alaska equal "To Build a Fire." "Ardor" comes near a Blackwoodian outdoor elemental sublime.

The Worms Crawl in

A hard-boiled narrator recounts what happens when he and his wife's lover go on a hunting trip. But once the blow falls, the story blossoms from well-observed crime story to lush cosmic horror.

"This is about the ritual."

"Duh," Vadim says. "The goon is one of Zane's pets, or something like that."

"But why are they after us? We're part of the inner circle, right? Ground floor of the new order and all that jazz?" I hadn't taken it seriously, had only gone along because of the pressure. I hadn't swallowed ZT's apocalypse fantasies. Now, here I am trying to lawyer my way out of getting murdered.

He gives me a sad look for not paying attention during class.

Memoirs of a positronic dog in an age of imperial debauchery and decline.

First date and a walk after dinner in Sleepy Hollow, New York. The dialogue is beautifully done.

He'd been drinking. Scotch on the rocks. Probably not enough of it, though. When she removed her coat, he noted that the flesh of her arms was bruised purple. He breathed in the smell of her and observed how her skin shone, how her breast rose and fell, how her lips curved enigmatically, and nope, definitely not enough with the drinking for him.

"Wasn't something there a minute ago?" She pointed to the sidewalk and the sandwich board sign that advertised the restaurant.

"A big fucking black dog," he said. He'd seen the dog all right — huge and shaggy, black as the heart of night. Foam curdled its muzzle. Its tongue had lolled as it grinned at him from where it reclined at the foot of the sign. "Red eyes. Kinda spooky."

"Red eyes like a vampire in a motherfucking Hammer flick." Wow; fucking, then motherfucking, no less, and in under the first twenty seconds. A personal best. He finished his scotch and loosened his collar and stared at the patch of sidewalk where the enormous black dog had lain moments ago. Had there been a leash? A master? He couldn't picture the scene anymore. He remembered the last of the sunlight in its eyes, however. Those eyes were suddenly coals ignited by a breath, and its wide, friendly smile hinted at a sort of knowingness.

"It's gone now. I've got no problem with dogs. Seemed friendly. Odd, is all."

"No, no, it's bad luck. Or, wait. Not bad luck — a bad omen. To see the black hound means curtains for you or someone close to you."

"Britain. A legend from over there. My dad went and lived on the moors when he graduated from school. He photographed mounds and menhirs, pillaged tombs. Et cetera."

A doom-ladened and well-executed phantasmagoria.

.....You sleep with a lot of women with the light on, lose your erection whenever you stop to think. There are nightmares. One that recurs has you as a child in your old bedroom, you stand near the dresser and a poster of Buck Rogers. A skinny hand and arm slither from beneath your bed, followed by your father. Except his face is angular and cold with alien emotion. He moves the herky-jerky way a marionette does. He wants your blood, projects that desire into your thoughts without opening his mouth. You always awaken before he gets you. Hell of it is, you don't know whether it's really a dream or a suppressed memory. So, you drink.

A magnificent story of real scope and power. "A man and his dog versus the Outer Dark."

A masterfully executed collage of conspiracy, sudden death, and catastrophe among a layer of young men and women from Barron's Alaskan Yoknapatawpha. The effect is fantastic without being confusing. Gone is the tone of glib facetiousness that spoils the volume's early tales featuring recurring character Jessica Mace.

"Tomahawk Park Survivors Raffle" seems at certain moments about to infect the reader with its nightmare logic. 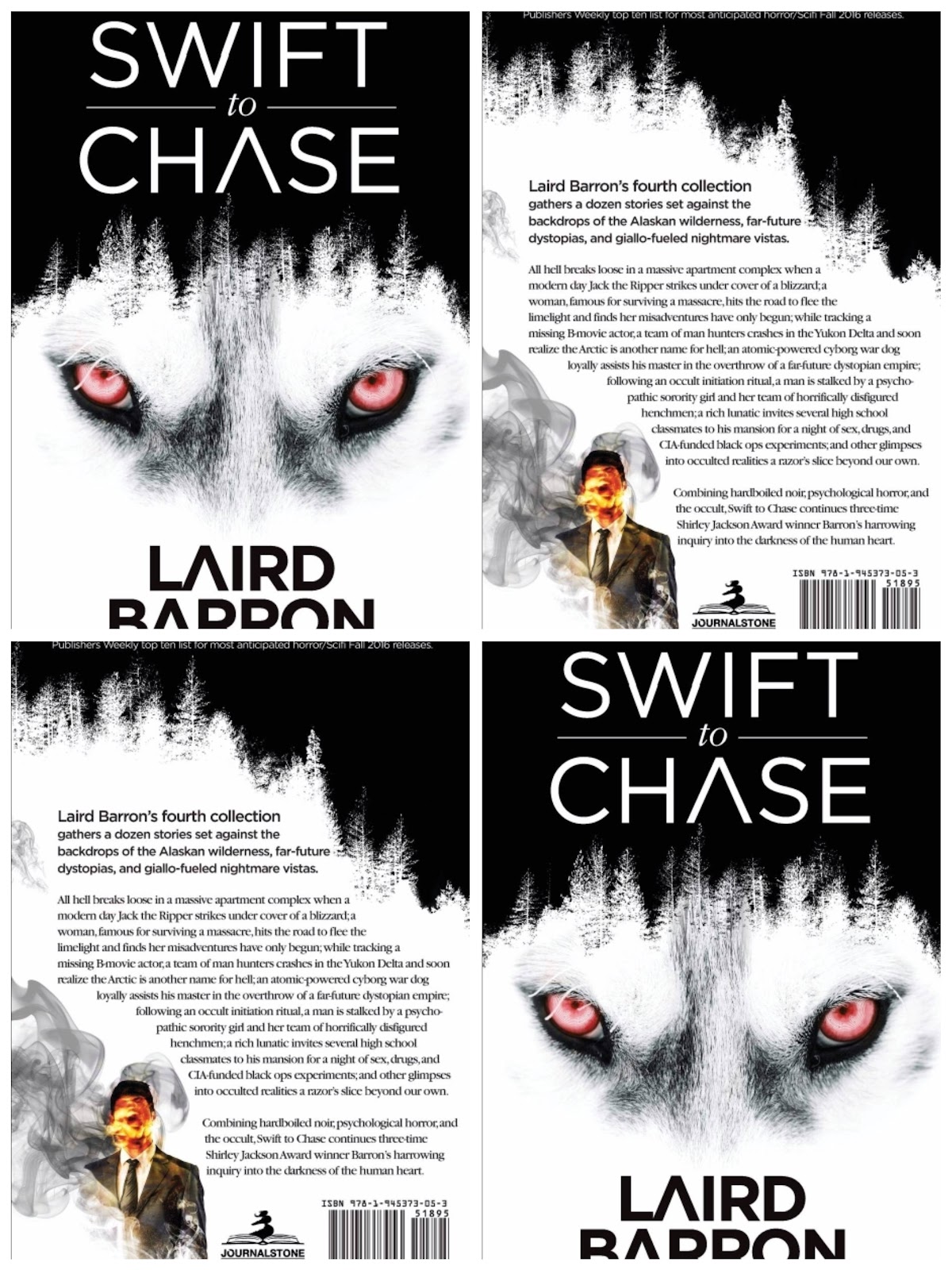 Posted by Jay Rothermel at 1:34 AM