"There are sacraments of evil as well as of good about us, and we live and move to my belief in an unknown world, a place where there are caves and shadows and dwellers in twilight. It is possible that man may sometimes return on the track of evolution, and it is my belief that an awful lore is not yet dead."

There are probably few better single-author collections of horror stories than The Beautiful Thing That Awaits Us All and Other Stories by Laird Barron (2013).

The stories are of high quality, carefully revised and polished; no stylistic idiosyncrasies or "poetic" style are allowed to occlude between reader and text.

An achingly perfect tale about women caught up in the malignant power of a landscape, united by experiences of the uncanny as well as an "awful lore is not yet dead."

"His brother Caleb drowned in the Devil's Punch Bowl. Four people saw him fall into the water and disappear. The body was lost, but Job claimed to meet something pretending to be his brother a year later. He was walking along the beach and saw him lying under a pile of driftwood. Job ran toward his brother's corpse, but when he reached it, Caleb sprang from the weeds and slithered into the water, laughing. Job was terrified when he realized the figure didn't really resemble his brother at all. And that's why he stopped fishing here."

....The flagellants march past the stoop of my crumbling home every day at teatime. We don't observe teatime here in the next to last extant Stateside bubble-domed metropolis. Nonetheless, my artificial wifey makes a pot of green tea and I take it on the steps and watch the flagellants lurch past, single file, slapping themselves about the shoulders with belts studded with nails and screws and the spiny hooks of octopi. They croak a dirge copped from ancient tablets some anthropologists found and promptly went mad and that madness eagerly spread and insinuated itself in the brainboxes of billions. They fancy themselves Openers of the Way, and a red snail track follows them like the train of a skirt made of meat. Dogs skulk along at the rear, snuffling and licking at the blood. Fleas rise in black clouds from their slicked and matted fur.

Two women explore the area around their forest cabin.

"Well, what did you find? Some moonshine in mason jars? D.B. Cooper's skeleton?"

"Time for the reveal!" Miranda extricated herself from Lorna and went and opened the door, letting in a rush of cold night air. She returned with what appeared to be a bundle of filthy rags and proceeded to unroll them.

Lorna realized her girlfriend was presenting an animal hide. The fur had been sewn into a crude cape or cloak; beaten and

weathered from great age, and shriveled along the hem. The head was that of some indeterminate predator-possibly a wolf or coyote. Whatever the species, the creature was a prize specimen. Despite the cloak's deteriorated condition, she could imagine it draped across the broad shoulders of a Viking berserker or an Indian warrior. She said, "You realize that you just introduced several colonies of fleas, ticks, and lice into our habitat with that wretched thing."

"Way ahead of you, baby. I sprayed it with bleach. Cooties were crawling all over. Isn't it neat?"

"It's horrifying," Lorna said. Yet, she couldn't look away as Miranda held it at arm's length so the pelt gleamed dully in the firelight. What was it? Who'd worn it and why? Was it a garment to provide mere warmth, or to blend with the surroundings? The painting of the hunter was obscured by shadows, but she thought of the man in buckskin sneaking along, looking for something to kill, a throat to slice. Her hand went to her throat.

"This was hanging from a peg. I'm kinda surprised it's not completely ruined, what with the elements. Funky, huh? A Daniel Boone era accessory."

"Have you been taking drugs? You doing X?"

"Are you trying to piss me off?" She smiled and blew smoke at him.

"I'm trying to decide what I think. You're acting different." He didn't know what to say about her bizarre iris and figured keeping his mouth shut was the best course for the moment.

"Hmm. I've been seeing a hypnotist. Trying to break this smoking habit."

"Uh, did you happen to think that might be the reason you've had lousy dreams lately? Go screwing around in your brain and God knows what'll happen."

Enticing story about interactions among espiocrats running the military-industrial complex.

Dr. Christou was broad through shoulders and chest. His large head was bald except for a silvery fringe, and his mustache and beard were white streaked with black. He wore a vintage suit and three rings-two on the left hand, one on the right. He drank copiously; Canadian Club. These days a proper Greek drinks scotch, but as a culture-strapped American, a Canadian import will suffice. Lancaster couldn't help but notice he resembled the bluff and melodramatically distinguished actors who populated Saturday night horror features of yesteryear; a physically imposing relative of Christopher Lee. The doctor said to Mr. Rawat, "I don't pretend to know the truth, my friend. There are cracks in the world. These cracks are inhabited by…marvels undreamt of in our philosophies."

"We have known each other for an age," Mr. Rawat said. "and I am still uncertain where the truth ends and the bullshit begins with you."

"I think the subject of night terrors is fascinating," Mrs. Cook said. She and her husband were slightly younger than Mr. Rawat and Dr. Christou, around Lancaster's age, a year or two shy of senior discounts and social security checks. The couple were gray and heavyset, habitual tans as faded as ancient tattoos. Mr. Cook wore a heavy tweed jacket, and his wife a pattern dress and pearls that were slightly behind modern fashion. She'd drunk her share of gin and tonic.

"Actually, I prefer Blackwood and Machen during the proper season. When the leaves are falling and the dark comes early and stays. The Horla, by Maupassant. There's a fine one regarding sleep paralysis and insanity."

A masterpiece of cosmic horror, of the Appointment in Samarra, and the epitome of Vastation in horror aesthetics.

....Bane laughed, then spat. "Yeh, so I am, laddio. This is a haunted place. Explorers wandered 'round Mystery Mountain in the 1840s. Richies in the city, newspapermen mostly, financed 'em. Found mighty peculiar things, they say. Burial mounds 'an cliffside caves with bodies in 'em like the Chinee do. A few o' them explorers fell on hard luck an' got kilt, or lost. Some tried to pioneer and disappeared, but onea 'em, a Russian, came back an' wrote hisself a book. An pieces o' that book wound up in another one, a kind o' field guide. Looks like a Farmer's Almanac, 'cept black with a broken circle on the cover. I seen that page afore. Ain't too many copies o' that guide not what got burned. My mama was a child o' God and hated it on account o' its pagan blasphemy, documentin' heathen rites an' sich. Grand pappy showed me in secret. He weren't a particularly devout feller after he finished spreadin' the Lord's Word. Had a crisis o' faith, he said."

A White Hunter in the 1920s joins an upstairs-downstairs group of protagonist for a hunting trip on the Olympic peninsula. As readers of Hemingway, Faulkner, and Lansdale know, hunting trips in fiction are never just hunting trips.

....Dr. Landscomb said, "Hark, my cue. The wood we now occupy is called Wolfvale and it stretches some fifty miles north to south. If we traveled another twelve miles due east, we'd be in the foothills of the mountains. Wolfvale is, some say, a cursed forest. Of course, that reputation does much to draw visitors." Dr. Landscomb lighted a cigarette. "What do you think, Master Scobie?"     "The settlers considered this an evil place," Scobie said, emerging from the bushes much to the consternation of Mr. Briggs who yelped and half drew his revolver. "No one logs this forest. No one hunts here except for the lords and foolish, desperate townies. People know not to come here because of the dangerous animals that roam. These days, it's the wild beasts, but in the early days, it was mostly Bill."     "Was Bill some rustic lunatic?" Mr. Briggs said.     "We Texans know the type," Mr. Williams said with a grin.     "Oh, no, sirs. Black Bill, Splayfoot Bill, he's the devil. He's Satan and those who carved the town from the hills, and before them the trappers and fishermen, they believed he ruled these dark woods."

"The Indians believed it too," Mr. Welloc said.

"I've talked with several of the elders, as did my grandfather with the tribal wise men of his era. The legend of Bill, whom they referred to as the Horned Man, is most ancient. I confess, some of my ancestors were a rather scandalous lot, given to dabbling in the occult and all matters mystical. The town library's archives are stuffed with treatises composed by the more adventurous founders, and myriad accounts by landholders and commoners alike regarding the weird phenomena prevalent in Ransom Hollow."     Scobie said, "Aye. Many a village child vanished, an' grown men an' women, too. When I was wee, my father brought us in by dusk an' barred the door tight until morning. Everyone did. Some still do."

Luke Honey said, "A peculiar arrangement for such a healthy community."

Dr. Landscomb said. "Those Who Work are tied to the land. A volcano won't drive them away when there's fish and fur, crops and timber to be had."

"Yeah, and you can toss sacrificial wretches into the volcano, too," Mr. McEvoy said.     "This hunt of ours goes back for many years, long before the lodge itself was established. Without exception, someone is gravely injured, killed, or lost on these expeditions."

"There are swamps and cliffs, and so forth," Dr. Landscomb said. "On occasion, men have wandered into the wilds and run afoul of such dangers. But to the point. Ephraim Blackwood settled in Olde Towne at the time of its founding. A widower with two grown sons, he was a furrier by trade. The Blackwoods ran an extensive trap line throughout Ransom Hollow and within ten years of their arrival, they'd become the premier fur trading company in the entire valley. People whispered. Christianity has never gained an overwhelming mandate here, but the Blackwoods' irreligiousness went a step beyond the pale in the eyes of the locals. Inevitably, loose talk led to muttered accusations of witchcraft. Some alleged the family consorted with Splayfoot Bill, that they'd made a pact. Material wealth for their immortal souls."

A noirish narrator out of Hammett runs into something dark in the Roaring Twenties.

....The severed hand clutched a black candle. A brass kaleidoscope of particularly ornate make caught my attention. I squinted through the aperture and turned the dial. The metal felt damnably cold. Jigsaw pieces of painted crystal rattled around inside, revealing tantalizing glimpses of naked thighs and breasts, black corsets and red, pouty smiles. The image fell into place and it was no longer a burlesque dancer primping for my pleasure. Instead I beheld a horrid portrait of some rugose beast-all trunk and tentacle and squirming maw. I dropped the kaleidoscope like it was hot.

An Answered Prayer story reminiscent of Capote's fiction Answered Prayers: the author bites the hand that feeds him. It's a strange tale in bad taste filled with contempt for a thinly disguised Thomas Ligotti. Hemingway had to excoriate Sherwood Anderson; perhaps this is similar. 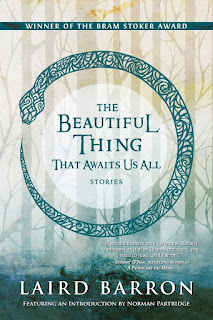 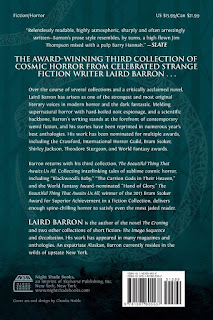