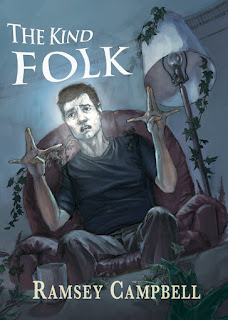 Stand-up comedian Luke Arnold learns on national TV that he is not the offspring of the Mom and Dad who raised him.  Which also comes as a shock to his parents.  Luke is thirty, living with musician Sophie, and they are about to have their first child.

Luke's Uncle Terence appears to know more about the mystery than he lets on, but dies before he can reveal anything.  Luke hunts through Terence's diary for clues.  He then uses his comedy tour schedule to follow up on people and locations mentioned.  Most of the locations have some association with fairies and fey lore.  Which brings back a multitude of half-forgotten childhood memories for Luke.

….Sophie folds the newspaper as small and thin as a book and lets the lid clap shut on it. "Do you remember what you were dreaming?"

"What, when I was six?" He's surprised to be able to say "It was the same thing for however long it lasted. Somebody was watching me and I don't think I wanted to see them."

"They used to be at the window." He's disconcerted by how vivid the memory is growing. "Sometimes they were looking in upside down, more than one of them. And sometimes I thought their necks must be as long as a giraffe's if they were the right way up, or they could stretch that far."

"I'm not surprised you made a noise."

"That wasn't all," Luke says, though he's beginning to wish it had been. "If I didn't they would come in even though the window wasn't open and stand at the foot of the bed."

"They weren't as stretched as you thought, then."

"They could take all sorts of shapes," Luke says, and another memory lights up like a tableau in a ghost train: how the figures silhouetted in the moonlit dimness would lay their hands on the bedrail. They would grasp it as though they were establishing some form of ownership, and then all their hands would adopt another shape. It seems to him now that it resembled a symbol more than any hand ought to be able to do. "I've forgotten how they looked," he says, "before you ask."

"Did you tell anyone at the time?"

"I had to. Freda, Maurice, the doctor, the psychiatrist. Just that I kept dreaming somebody was at the window or in the room."

Sophie lowers herself onto one of the quartet of rickety chairs that loiter around the stained table. "What did they say?"

"Not a word I can remember. Sometimes I thought they hadn't got around to having mouths," Luke says and laughs, though not much. "You're asking me about the people I told, aren't you? The psychiatrist said it was nothing to worry about, so we didn't."

"There must have been more to it, Luke."

"She was the kind even the Arnolds liked. I'd say she thought psychiatry was her last resource after she'd tried everything else, certainly for somebody my age. She said I was highly imaginative and oughtn't to spend so much time on my own, and not to feed me close to bedtime, and keep an eye on what I read and watched. They'd have recommended her to their friends if they hadn't been so embarrassed about taking me to see her. But they did everything she said, and made sure I brought friends home from school, and I stopped waking Freda up."

"So the psychiatrist was all you needed."

Sophie clasps her hands on her midriff as though she's protecting their child. "Why not, Luke?"

"I think I cured myself." He waits until she parts her hands. "I told you the Arnolds were embarrassed," he says. "I really think that made me feel worse than the dreams or disturbing Freda. I thought I wasn't the kind of son they'd hoped for, and so I did my best to be."

Sophie turns her hands up towards him, and he's put in mind of an opening flower. "What did you do?"

"Whenever the figures showed up I kept my eyes shut, even if they came into the room, and pretty soon they went away for good."

"You managed that when you were six years old, Luke?"

She's expressing admiration, not disbelief, but for an uneasy moment he feels she's implying that he couldn't have overcome his condition—that it's lying low inside him. "I hope they knew how brave you were," she says.

"Nobody needed to know."

The Kind Folk is an intimate novel of great poignancy.  Campbell builds up our anxiety and tension with a number of carefully wrought set-pieces.  As the birth of Luke and Sophie's son approaches, the couple are subjected to increasing emotional and physical pressures.

Campbell gives nods to a couple of villains in previous novels I just finished: Nathaniel Selcouth of The Darkest Part of the Woods and John Strong of The Doll who At His Mother. (Readers of those books know these wizards inflicted their greatest evils on pregnant women.)

The novel is written in the third person present-tense, of which I am not a fan.  But after finishing The Kind Folk, I can see some of its advantages.  It allows Campbell to convey a real sense of immediacy and subjective disorientation, perfectly reflecting Luke Arnold's nightmarish progress investigating the mystery of his own past.

Posted by Jay Rothermel at 3:19 PM