Bull-Roarers and Panic terrors: The Garden at 19 by Edgar Jepson (1910)

I have been enjoying Edgar Jepson's 1910 novel The Garden at 19. It's a gem of an occult menace tale, and makes a good compliment to the works of Arthur Machen, who gets a cameo in the novel under the name Marks.


About a month ago I read Conjure Wife by Fritz Leiber, in which the sound of a bull-roarer plays a role. Imagine my surprise when a bull-roarer appears in The Garden at 19.


….On the night of the full moon I waited to see Woodfell's assistants arrive; then I went upstairs and helped Pamela over the partition wall and into No. 20. She was excited, elate, and not at all fearful. We took up our post at the window of the empty room.


It was a still, hot night, and the oppressor darkness weighed on us. Moreover, we were too excited and expectant to talk much. Presently the door into the garden opened, the roaring of the bull-roarer rose on the throbbing air, and the celebrants in their strange ritual garb filed down the garden to the lawn, under the mist of smoke from the swinging censers. Pamela's hand stole into mine, and I clasped it firmly.


The ritual began, and as it went on I found that, seeing it for the second time, I could follow it with greater understanding. I could not, indeed, catch the meaning of the bulk of the symbolic gestures, but I caught the meaning of some of them, and I grasped the form of the ritual as a whole.


….For a long while the ritual was formal and mechanical; and I watched it, as you might watch a curious and rather pointless mummery, with an attention that sometimes flagged, for the prayers and the responses were expressionless. But after a long while, when the shadows thrown by the declining moon were falling across half the lawn, I became aware of a sudden that a new note had crept into their voices, a note of eagerness and expectancy. The prayers grew quicker, and louder, and more insistent; the responses were deeper. When one of the celebrants came to the bowl, he made haste to drink and get back to his place. My eyes grew more intent on them; and I found myself quivering once or twice, as if their eagerness was infecting me.


Woodfell was again the chief celebrant, and his muttering had risen to a hoarse chanting. It sounded like a series of adjurations. It was then I caught the names. Adon I caught, and Pan, and Moloch, and Mithras; and there was a name: Nodens. I was sure it was a name, though I did not know it. They came again and again louder and louder. A fierceness, a savagery had come into their tones; and it affected me oddly. I was quivering and tingling in an intense expectancy.


Of a sudden the fluttering roar of the bullroarer broke on the air. It struck on my ear as a warning and a threat; and on the impulse of some other, under-self, I found myself on my feet in act to fly. I gripped the back of the chair and stood swaying, dazed.


There fell a sudden dead silence; and it was broken by the sharp bleat of a lamb.


On the instant Babel broke loose. All the celebrants were shouting together, each of them was shouting a different name, and adjuring the bearer of the name in a different tongue, and leaping and waving his arms, as he shouted. A thick cloud of smoke rolled over the lawn, as if handfuls of incense had been thrown on the fire, veiling them from my eyes. Then came a triumphant outcry and a victorious shouting and then the patter of dancing feet.


And as they cried out as they danced I could have sworn that their voices were changed. Or did other voices rise up to me from the veiled lawn? A puff of wind set the incense veil stirring for a moment; and my strained eyes seemed to see the lawn full of figures dancing, many more than seven. Once above the confused outcries, a woman's laugh came clearly, joyous and wanton: I could swear it. Yet it was not quite a woman's laugh, a human woman's laugh.


Suddenly, as I listened and stared down with straining eyes, there smote on my nostrils, stronger than the strong fragrance of the incense, the acrid odour of the goat.


On the instant, inexplicably, I filled with a panic terror. This trivial thing seemed to let loose that under-self which I had held down so long, and deliver me to it helpless. I dashed out of the room, rushed stumbling, staggering, striking against the banisters and the walls, down the stairs, out of the house, and up the Walden Road... 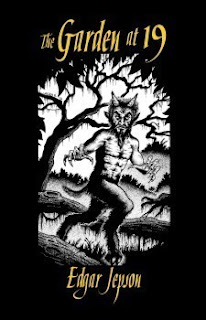 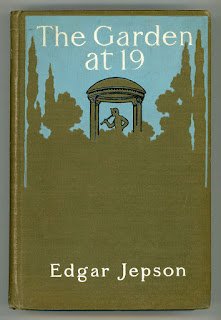 Posted by Jay Rothermel at 6:40 AM