No time for geometry lessons: Strange Eons by Robert Bloch (1979)

Bloch can hit the heights:

....Logic blossoms in the light of day, but when the night comes it withers quickly at a shadow’s touch. Then the darker flowers bloom and writhe, pouring forth the perfume of fear.

But in the end it's another US fashion model stripped naked for sacrifice:

....She struggled, but their grip was firm and their hands stripped away her clothing until she stood naked in the circle of torchlight.

The Black Man lifted his arms.

“Behold the bride!” he chanted.

And from behind her the voices rose in response. “Behold the bride!”

Then, somewhere in the darkness, a drum sounded. Sounded and boomed as the stars blazed down and Mike was dead and she was shivering with shame and cold but they held her fast as the Black Man beckoned, turning to lead the way.

Now they were forcing her forward, dragging her up the slope of Rano Roraku past rows of toppled statuary—the great stone heads with pegged bases, guardians of the crater above. Kay fought and twisted, but could not free herself. They half-carried her toward the rim as the carven faces loomed on every side—strange faces with upturned noses, scornful lips, and no eyes. What was it that even stones were not meant to see?

The drums thundered and the voices chanted, and past the crater ahead she could see the jagged outlines of the Poire promontory beyond, looming through a veil of mist.

Was it mist or miasma? Now the odor welled forth, nauseating and overpowering, a sea-stench swirling over her bare body, enveloping it in a reek of corruption, which suffused her senses. Behind her the drums boomed, the torch-bearers echoed their endless litany.

Kay reeled and stumbled, dazed by the mingled waves of sound and stench. Frantically she closed her eyes, striving to shut out sight and sensation, but the echo of the chanting remained. Behold the bride.

Suddenly she remembered the name and its source. Lovecraft’s story, The Dunwich Horror. The half-witted albino girl, Lavinia—who became the bride of Yot-Sothoth.

Kay opened her eyes, and as she did so, the foggy curtain ahead began to part.

Something was moving in the mist.

It rose—huge, black, oozing and bubbling forth from the great volcanic crater where it had watched and waited—its squamous shape silhouetted against the stars as it wriggled up and out, flowing toward her.

A single glimpse caused her to scream so loudly that she did not hear the drums, the chanting, or even the sound of the approaching planes overhead.

They flung her forward.

Then the writhing appendages extended to embrace her, and she knew no more. 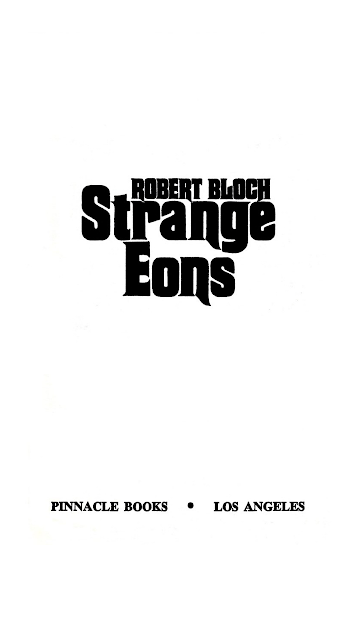