Once the forest gets in: The Darkest Part of the Woods by Ramsey Campbell (2003)

....The clamour of traffic blotted out any sounds among the trees. There was movement in the woods, but none of it was alive. Whenever headlights swung around the curve beyond the lay-by, rank after rank of trees flared up, as lattices of shadow trawled the dimness. She could hardly get lost in less than a square mile of woods when the bypass was making so much noise, but she hoped that wouldn't cover up any sounds of her family. She stepped off the concrete of the lay-by onto soft slippery leaf-strewn earth.

Beam after headlight beam solidified by mist preceded her between the trees. Her shadow kept springing up in front of her, caged by tree-trunks, while unexpectedly chill shadows of trees glided over her back. Before long the beams fell short of her, but she didn't need to use the flashlight yet; she had only to head for the sunset that tinged the highest leaves crimson as though the world was yielding up blood to the sky. Perhaps the dimmest stretch of the headlights was still visible beyond her, producing an impression of thin movements that dodged between the trees. The traffic noise was muffled now, but a backward glance showed her a shuttling of lights. "Mother?" she tried calling, and raised her voice. "Anyone?"

She thought she heard a distant pair of syllables respond from the direction of the sinking glow. She followed as straight a route as she could towards it through the wooden maze, around humps of scaly earth. Moist air that tasted of fog and decay caught in her throat as she called "If you can hear me, give a shout," and switched the flashlight on.

She hoped it would show where she was. While its beam illuminated her way, it persisted in starting thin shapes out of concealment behind the trees, the kind of sight she could imagine troubling her as a child. She tried standing still and listening for sounds other than the drip of condensation around her in the dimness. She could no longer hear the bypass. "Where are you?" she called, because she felt observed.

The Darkest Part of the Woods by Ramsey Campbell (2003) is a brilliant, brooding novel in which family tragedies and imminent cosmic catastrophe are braided.

The family's name is Price, and they each pay a very heavy price in the course of the novel, as well as before the action begins.

The father, Lennox, has lost his mind after exposure to hallucinogens at the heart of Goodmanswood's weird forest. He is confined to a local facility from which he and fellow inmates obsessively watch the woods.

His wife, artist Margo, finds inspiration in the woods, though this inspiration forces her out on the narrow edge of disaster. (Her show of sculptures formed out of branches from the woods culminates in a bravura comic chapter set in a London gallery. Worthy of the Waugh of "Mr. Loveday's Little Outing.")

Heather, eldest daughter, is a librarian at the local university. Heather is the most normal member of her family, forever careful and endlessly worried about her parents, sister, and son. Heather is our point of view for the novel's action, our detective putting together fragments of folklore, her father's gnomic hints, and her mother and sister and son's impressionistic surmises.

Sam, her eighteen year old son, feels physically entangled by the woods, experiencing amnesia and confusion every time he leaves it. When he tries to leave town for a London job interview, Campbell gives us a frantic, absurdist nightmare passage sped up to Keystone Cops pace. There is no escape.

Heather's young sister Sylvia presents herself as a globe-trotting folklorist. As the novel begins, she returns home, announcing her pregnancy. (The Darkest Park of the Woods, in addition to its many other aspects, is a great pregnancy-horror novel. Sylvia's baby seems to develop too quickly, and her swelling belly seems to pull her toward objectives the fetus is more curious about than she.)

Nathaniel Selcouth, a long-dead witch or wizard whose domain was in the darkest part of Goodmanswood forest, inumbrates the experiences of the Price family. Sam and Sylvia discover his reeking diary in the scorched tunnels of his long-hidden lair. (Heather refers to its paper as "senile.")

Ramsey Campbell's novels are so dread-full that it has often been an unbearable experience when I try to read them.  The harrowings his characters - men, women, children - experience dig rhetorical spurs very deeply.

I won't be spoiling the plot of The Darkest Party of the Woods. It is a strong novel by a strong writer. Often it reminds me in its old-wizard-returning and misshapen-creatures-underground motifs of The Case of Charles Dexter Ward.

But The Darkest Part of the Woods is superior to any antecedents.

One of Campbell's greatest career achievements are his women characters. Here they bleed with empathy and struggle for patience born out of love for each other. Heather, who knows she is the sanest of the Price women (and men) faces at each turning of the plot a new challenge to her heart and her sanity. She is the standfast glue that holds the family together and allows it to -

Well, read the book to find out how strong Heather and the Prices really are. 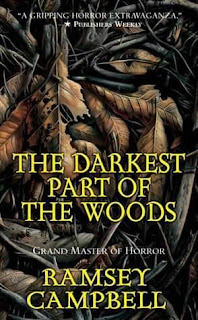