You’ve got to mind your fingers when you give a dog a bone: The Striker Portfolio by Adam Hall (1968)

The Striker Portfolio (1968) is a short, sharp spy thriller. Secret agent Quiller zigzags between West and East Germany, struggling to "get in the way" of a Stalinist cell crashing Luftwaffe jets and forcing the political downfall of FRG politicians and military leaders opposed to reunification on the GDR's terms.

....Their headlights came on suddenly in the mirror and I knew what was happening because I'd worked out the formula: the formula for survival. The basic data for the N.S.U. RO-80 included weight and speed figures: 1210 kilograms with a dry tank, 180 kilometres per hour. The gears were automatic and the front wheels did the driving. The time-lag was about the same with the automatic as with a manual shift and so it didn't make any difference. The superior traction of front-wheel drive wasn't likely to affect things even on the fast curves north of the mountains because there would have to be a curve that had to be driven round if the N.S.U.'s cornering advantages were to be brought into play.

The Mercedes 300 weighed 1560 kilos and the top speed was 190 k.p.h. Gear control was optional and I didn't know which this one had. The rear wheels did the driving.

First findings: all factors being equal the Mercedes could overhaul me by 10 k.p.h. and give ms a 350-kilo nudge into the tree-trunks when it was ready.

Unknown data: the precise weight of the two men and the amount of fuel they had on board. There was nothing to be done about this. Give a man eighty kilos with shoes and overcoat: they had an extra 430. Assume their tank was close on full: it took them past 450. But it would need a slide-rule to decide the balance: how much their extra weight was going to cost them in acceleration and maximum speed, how much it was going to help them nudge me off the road.

I'd done what I could at the Esso station, telling the man to shut off at twenty-five litres. That amount would get me to Hanover if necessary and left the N.S.U. lighter.

Workable findings: assume the best figures - both men were heavy and their tank was full and it would cost them 10 k.p.h. in maximum speed. Add 1 k.p.h. In one hour there would be a kilometre's distance between us and with that kind of margin I could peel off at whatever loop-road I liked: Braunschweig Hildesheim, Hanover itself. And they wouldn't see me go. Assume, the worst figures - both men were average weight and they had a quarter tankful and they had the edge on me in terms of maximum speed. The extra weight of one man would bring down the speed fractionally but not the full 10, k.p.h.

Conclusion: the Mercedes had to be faster than the N.S.U. by 1 k.p.h. if they were going to stay with me and send me into the trees. I believed on the figures alone that it was 1 k.p.h. faster and that they could do that.

There was only the one area in which I could hope to work, hope to avoid a mathematical certainty. The N.S.U. had a rotary engine and was lighter by 350 kilos and that gave me the edge on them in acceleration. I was already establishing a lead: that was why they'd just put their headlights on. They were worried. Their idea would be to stay with me almost bumper-to-bumper with their lights out so that I couldn't see enough in the mirror to judge how close they were, couldn't see which side they were creeping up on to shape for the final nudge.

The N.S.U.'s superior acceleration and the Mercedes' higher top speed would vary the distance between us as we went north. It would be like a Chriscraft towing a water-skier on a long piece of elastic: the N.S.U. would draw ahead and then the tension would be taken up and the Mercedes would close the gap until it hit.

The only outside factor that could come into play was the presence of other cars making north. But we were both going to take it right up to the ceiling and there wasn't likely to be anyone driving in the 180-190 region at night.... 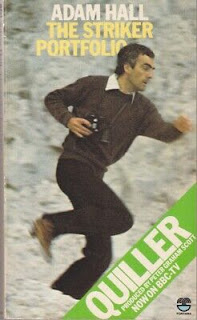 Posted by Jay Rothermel at 3:45 PM