When Westlake/Stark returned to the Parker character in 1997, there was a new curiosity about the connectedness of characters and plots. The titles of the novels starting with Comeback demonstrate this knowing linkedness:

In hindsight, there is a cohesive arch leading toward the superb Breakout, where the protagonist assumes the task of an Edmond Dantes: escape incarceration or be imprisoned forever.

The last three Richard Stark novels written by Donald E. Westlake form an ambitious overarching trilogy of plot. Westlake had done the same at the beginning of the criminal flueve in 1960 with The Hunter and it's for subsequent volumes: the heister Parker coming back from the dead to square off against former partners and the outfit.

In Nobody Runs Forever (2004) Parker, McWhitney, and Dalesia plot to knock off an armored car carrying a small Massachusetts town's cash holdings when the branches are combined. There's an inside line for intelligence, but they're being shadowed by two bounty hunters, Ray Keenan and Sandra Loscalzo, whose everyday work Parker has inadvertently thwarted.

Nobody Runs Forever ends with the clockwork operation against the armored car. The heist team hides the loot locally in the choir loft of a defunct church. Cops flood the area too fast for Parker, McWhitney, and Dalesia to drive the cash and themselves away the next morning. They split up and Parker heads for the tall timber, pursued by literal bloodhounds.

As Ask The Parrot (2006) begins, Parker is climbing a wooded hill just ahead of cops and bloodhounds. As he reaches the  top he meets Tom Lindahl.

….The afternoon sun was to Parker's left, the sky beyond the man a pale October ash, the man himself only a silhouette. With a rifle.

Not a cop. Not with a group. A man standing, looking down toward Parker, hearing the same hounds Parker heard, holding the rifle easy at a slant across his front, pointed up and to the side. Parker looked down again, chose the next tree trunk, pulled himself up.

It was another three or four minutes before he drew level with the man, who stepped back a pace and said, "That's good. Right there's good."

"I have to keep moving," Parker said, but he stopped, wishing these shoes gave better traction on dead leaves.

The man said, "You one of those robbers I've been hearing about on the TV? Took all a bank's money, over in Massachusetts?"

Parker said nothing. If the rifle moved, he would have to meet it.

The man watched him, and for a few seconds they only considered one another. The man was about fifty, in a red leather hunting jacket with many pockets, faded blue jeans, and black boots. His eyes were shielded by a billed red and black flannel cap. Beside him on the ground was a gray canvas sack, partly full, with brown leather handles.

Seen up close, there was a tension in the man that seemed to be a part of him, not something caused by running into a fugitive in the woods. His hands were clenched on the rifle, and his eyes were bitter, as though something had harmed him at some point and he was determined not to let it happen again.

Then he shook his head and made a downturned mouth, impatient with the silence. "The reason I ask," he said, "when I saw you coming up, and heard the dogs, I thought if you are one of the robbers, I want to talk to you." He shrugged, a pessimist to his boots, and said, "If you're not, you can stay here and pat the dogs."

Surprised, the man said, "Well, no, you couldn't. It was about a truckload of cash, wasn't it?"

The man looked downhill. The dogs couldn't be seen yet, but they could be heard, increasingly frantic and increasingly excited, held back by their handlers' lesser agility on the hill. "This could be your lucky day," he said, "and mine, too." Another sour face. "I could use one." Stooping to pick up his canvas sack, he said, "I'm hunting for the pot, that's what I'm doing. I have a car back here."

Parker followed him the short climb to the crest, where the trees were thinner but within a cluster of them a black Ford SUV was parked on a barely visible dirt road. "Old logging road," the man said, and opened the back cargo door of the SUV to put the rifle and sack inside. "I'd like it if you'd sit up front."

Parker got into the front passenger seat as the man came around the other side to get behind the wheel. The key was already in the ignition. He started the car and drove them at an angle down the wooded north slope, the road usually visible only because it was free of trees.

Driving, eyes on the dirt lane meandering downslope ahead of them, the man said, "I'm Tom Lindahl. You should give me something to call you."

"Do you have any weapons on you, Ed?"

"There's police roadblocks all around here."

"What I mean is, if you think you can jump me and steal my car, you wouldn't last more than ten minutes."

Parker said, "Can you get around the roadblocks?"

"It's only a few miles to my place," Lindahl said. "We won't run into anybody. I know these roads."

Parker looked past Lindahl's sour face, downslope to the left, and through the trees now he could just see a road, two-lane blacktop, below them and running parallel to them. A red pickup truck went by down there, the opposite way, uphill. Parker said, "Can they see us from the road, up in here?"

"They'll get to the top in a few minutes, with the dogs," Parker said. "They'll see this road, they'll figure I'm in a car."

"Soon we'll be home," Lindahl said, and unexpectedly laughed, a rusty sound as though he didn't do much laughing. "You're the reason I came out," he said.

"The TV's full of the robbery, all that money gone, I couldn't stand it any more. Those guys don't get slapped around, I thought. Those guys aren't afraid of their own shadow, they go out and do what has to be done. I got so mad at myself—I'll tell you right now, I'm a coward—I just had to come out with the gun awhile. Those two rabbits back there, I can use them, God knows, but I didn't really need them just yet. It was you brought me out."

Parker watched his profile. Now that he was talking, Lindahl seemed just a little less bitter. Whatever was bothering him, it must make it worse to hold it in.

Lindahl gave him a quick glance, his expression now almost merry. "And here you are," he said. "And up close, I got to tell you, you don't look like that much of a world-beater."

He steered left, dogwn a steep slope, and the logging road met the blacktop.

Tom Lindahl is one of life's losers especially to himself. He lives in an old converted garage, subsisting on Social Security and what he can hunt. He has staked out the mountain because he has a proposition for any armored car heister he might chance to meet.

There is the usual to-ing and fro-ing with ancillary characters, some of whom realize Lindahlhl and Parker are not on the up-and-up in their "old pal" ruse. Together they join a local Rod and Gun Club posse hunting the armored car bandits, creating further complications.

Ask A Parrot is a satisfying and cozy lark, the middle of a longer structure, allowing Parker to inadvertently help the loser Tom get revenge on the world that betrayed him. It also offers a very satisfying racetrack robbery.

Dirty Money (2008) returns Parker to the main plot stream begun in Nobody Runs Forever. He gets safely back to Claire and rural New Jersey and plans to regroup to retrieve the hidden armored car loot. This reunites him with fellow heister McWhitney and bounty hunter Sandra Loscalzo. The trio must not only beard local road block. The armored car cash has traceable serial numbers: they will have to sell it to a middleman who can transfer the cash abroad.

….Parker was the first to arrive. Leaving his car in the parking area, carrying a deli-bought Reuben-on-rye sandwich and a bottle of water in a brown paper bag, he chose a picnic bench midway between the facade of the low brick park police building and the narrow access road around to the parking area. He sat with the building to his right, access road to his left, parking area ahead.

It was a bright day, but a little too cool for lunch in the open air, and most of the dozen other picnic tables were empty. Parker put the paper bag on the rough wood table, leaned forward on his elbows, and waited.

The red Dodge Ram pickup was next, nosing in and around the access road to park so the driver was in profile to the picnic area. Then he opened a Daily News and sat in the cab, reading the sports pages at the back. Parker would have preferred him to move to a table, as being less conspicuous, but it wasn't a problem.

The next arrival might be. A Daimler town car, black, it had a driver wearing a chauffeur's cap, and it stopped on the access road itself. The driver got out to open the rear door, and Frank Meany stepped out, looking everywhere at once. He was not carrying a brown bag.

Meany said a word to the driver, then came on, as the driver got back behind the wheel and put the Daimler just beyond the red pickup. A tall and bulky man with a round head of close-cropped hair, Meany was a thug with a good tailor, dressed today in pearl-gray topcoat over charcoal-gray slacks, dark blue jacket, pale blue shirt and pale blue tie. Still, the real man shone through the wardrobe, with his thick-jawed small-eyed face, and the two heavy rings on each hand, meant not for show but for attack.

Meany approached Parker with a steady heavy tread, stopped on the other side of the picnic table, but did not sit down. "So here we are," he said.

Meany did so, saying, "You're not gonna object to the driver?"

"Deal. Same thing for your friend in the pickup."

Parker shook his head, irritated. As he took his sandwich out of the bag and ripped the bag in half to make two paper plates, he said, "People who ride around in cars like that one there forget how to take care of themselves. If I'm looking at you out of one of those windows over there, and you're not here for lunch, what are you here for?"

"In New Jersey?" Parker pushed a half sandwich on a half bag to Meany, then took a bite of the remaining half....

All of which allows for some merry reversals of fortune and biters being bit.

Dirty Money was the last Westlake/Stark Parker novel. It ends with Parker having worked his ass off for what amounts to moderate payout. But modest pro that he is, Parker would never admit he ends up sitting pretty. 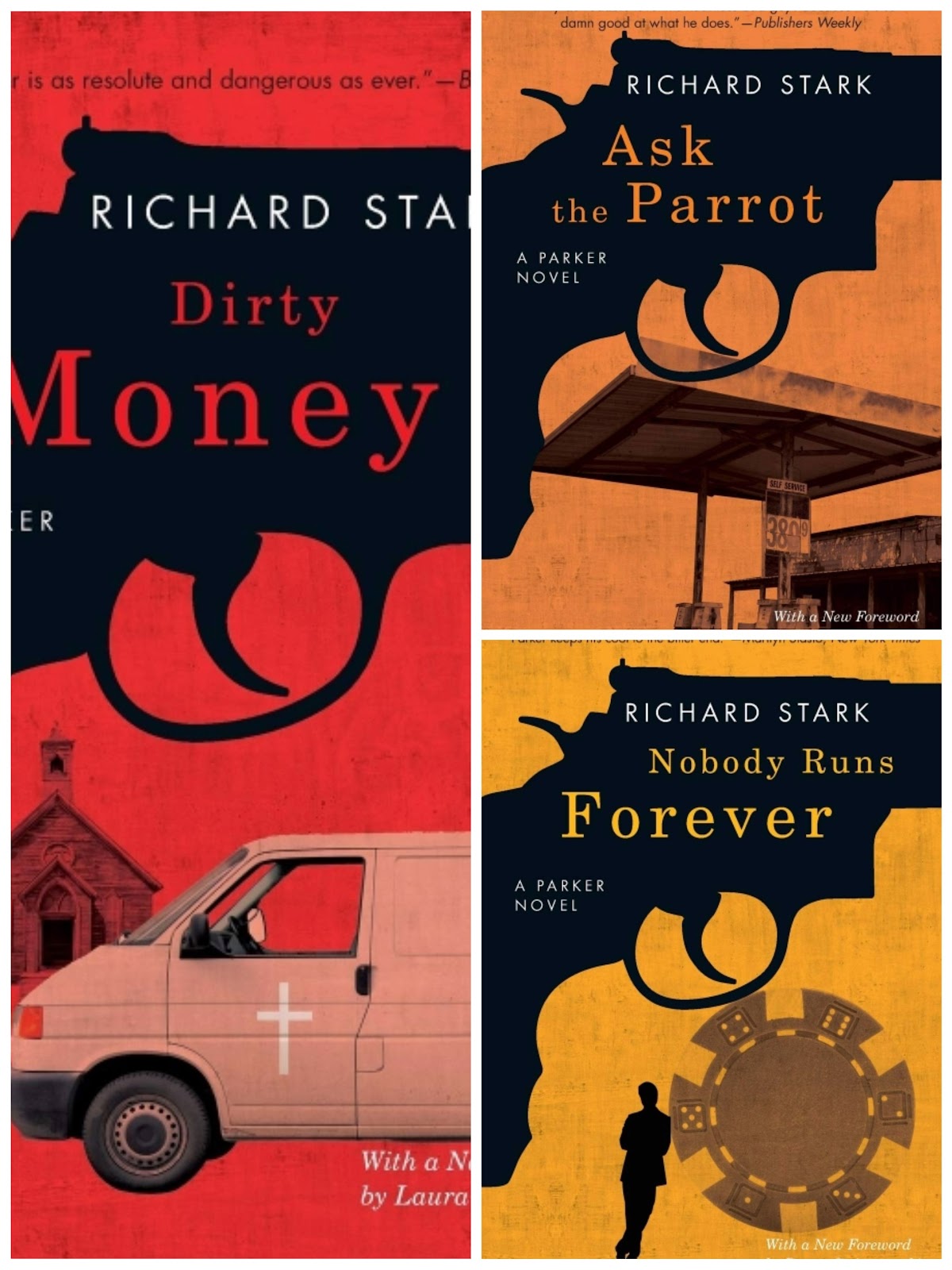