My useful political education has been entirely within the periphery and membership of the U.S. Socialist Workers Party.

The Kobra Manifesto struck several notes for me. The kidnapping of an industrialist in South America recalled the disgraceful left sectarian kidnapping of Oberdan Salustro. Mentions of Fourth International "terrorism," however distorted by bourgeois journalism, recalled the decade-long internal FI faction fight on guerilla warfare strategy. (The SWP-led LTF defended the traditional program of party-building; the IMT led by Mandel and Tariq Ali defended the get-rich-quick schemes of the IMT.)

In under 300 pages The Kobra Manifesto takes Hall's executive operator Quiller from Monaco to the U.S. by way of Khmer-encircled Phnom Penh and the jungles of the Amazon. In one shattering chapter, hot on the trail of the Kobra cell and their hostage, Quiller stows away on their international 707. In the wheel well!

….Up there on the far side of the Channel there were doors opening and closing along those dim-lit passages, and the gibberish was crackling through the static and out of the scramblers in Signals while a phone rang and was picked up and someone in Monitoring sent a memo to Egerton or Mildmay or Parkis and everyone waited for the word that would start this whole thing running. Somewhere in Beirut or The Hague or the Azores they were looking for the hole, and when they'd found the hole they were going to put the ferret down, and the ferret was me.

"The Organism" - Quiller's euphemism for himself as a mechanism

....The organism had looked after itself without my having to do any more thinking. I'd done me necessary amount of thinking first and then given the instructions to the organism and it had taken over. With two of them coming at me from each end of the alley there'd been no point in waiting till they closed on me at their own pace. The only chance lay in immediate and very aggressive action and I had made my run flat out, choosing this end of the alley because the street at the other end had exposure zones that I wanted to leave alone.

I didn't know if the two men behind me had started running: it didn't make any difference because I was going so hard that they wouldn't gain on me. The strength of the opposition had now been halved and there were only two people to deal with. They'd both stopped and were waiting and I think one of them was pulling a gun as I reached them.

The techniques of unarmed combat taught at Norfolk are based partly on karate. I have only used them twice to save my life, once in Warsaw and once in Hong Kong. In those instances there was only one adversary. Here there were two. There is nothing new about the primordial components of speed and surprise: they are essential to any attack, by whatever technique. Two further psychological components come into play when life is actually threatened: the instinct to survive, and the ability to relax and allow the primitive animal to perform in its own right.

In civilized society the will to take life is seldom conscious. Most murders are committed by relatives or close friends of the victim and the motivation is subconscious, an expression of rage, jealousy, humiliation, so forth. The need is not to kill but to relieve the psyche of its stress, and to do it in the quickest and surest way available.

The animal will do it consciously in order to survive.

There is no name, at Norfolk, for the extended techniques based on classic karate. Most of them are psychological and the most effective is this ability to relax and leave the animal to protect itself: not by defensive tactics but by the most implacable ferocity. In brief it might be termed the invocation of blood-lust.

There is probably a spin-off involved: the instillation of fear in the adversary. As I reached the two men I was an animal totally committed to killing them and I would believe that my whole body projected a degree of menace that would give them doubts.

Doubts at the instant of lethal combat can be critical.

Basically I used the tobi-mae-geri and was in the air with my feet at the knife-edge angle when I crashed into them. The man on the right died immediately and this was to be expected because I am right-handed and since if wasn't possible to aim a specific blow at both of them I aimed it at this one and he had no chance. The most effective weapon I had for the other man was my left knee, the leg doubled, because it isn't possible to perform the tobi-mae-geri with both feet: the body has left the ground and the balance has to be maintained.

....We've all got a rough idea of the way we'd like to go when it gets too hot to hold. For most of us it doesn't work out like that, although Delacorte managed it last year on the end-phase of the Bulgarian thing when he took his Mercedes through the frontier at Svelingrad into Turkey, straight through the bloody barrier flat out at a hundred and ten miles an hour with the tank on fire where they'd shot him up with a submachine-gun and the stuff still coming at him from the guard post-finished up like a sieve 'but his director in the field was there at the rendezvous and got 'him out and found the stuff on him: military installation layouts, airfield preparedness schedules, Moscow directives and fifteen long-run tapes of the Sovinformburo breakdown of the tactical manoeuvres operation, the whole beautiful bonanza right in London's lap. 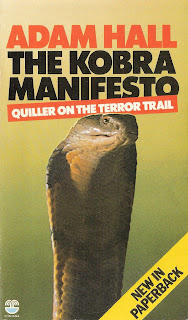 Posted by Jay Rothermel at 3:37 PM