A dog hungered for dog: The Ninth Directive by Adam Hall (1966)

…..Besides, it's typical of the Person. He put his feelings in a nutshell for the Evening Standard when he said: 'I want to be able to see the people, and some of them may want to see me.' Behind the whole story is of course a very definite request: no shields. And behind that decision is his personal view of the situation - he feels he will best serve his country by demonstrating that anonymous threats are for the wastepaper basket.' He looked down at his feet. 'I rather wish we weren't quite so responsible for the safety of quite so good a man.'

His bright eyes came at me again, 'But it's a matter of consequences, isn't it? You must have given it some thought.'

'All right, you tell me. You've got one foot in the Embassy and the other in London. What are the consequences if we miss? Another Sarajevo?'

'I don't know.' Almost petulantly he said, 'I've never worked in an area of which I've known so little.'

His mouth quivered silently, blocked by a rush of too many words. He was really very cross with me. He finally managed to speak. 'I wish I had your limited view, Quiller.'

'My view's limited by crossed hairs in a circle. Someone's got to concentrate on that. You look after the consequences while I pop the weasel. Then there won't be any.'

'How much,' he asked me as if I'd never spoken, 'do you think Kuo will be paid? If he succeeds?'

'He doesn't work that way. The cost of a dead body is a few bob and the cost of a bullet is a few pence. It's the set-up that's expensive and the fee's already in his pocket. I'd put it at five hundred thousand pounds.'

Loman nodded. 'Who can afford a sum like that? Only a government. That's why I can't ignore the question of consequences.'

I turned away from him. He could stay awake all night if he wanted to. I had to be fresh for the job.

'Worry it,' I said, turning again and watching him from a little distance. 'Worry it out. I've got my limited view. All I need to know is that the consequences of crooking the index finger are a hole in a skull.'

He didn't answer. I shall always remember him standing there among the colored kites, fearful and bright of eye, wondering what he'd got into and wondering how to get out. It was easier for me and my terms were simpler. A dog hungered for dog….

Quiller thinks of himself as a weasel sent down a role: is there a dog waiting at the other end? Pity the dog.

Quiller tells his own story. When he gets hurt, and he gets progressively more injured as the second half of the novel builds up speed, his voice becomes staccato and events are rendered as increasingly shorthanded collage.

Quiller is a Hawksian pro with a brain like a database. He recounts his skills, slows scenes down to describe each flash of action with near-scholarly footnoted detail. (Lee Child in the Reacher novels did not invent it, he just continues it beautifully.)

Quiller uses allies, though not all are on his side out of loyalty to him. But his own decency motivates his passion, and his angry exasperation at friend and foe alike.

Quiller gets maneuvered and out-maneuvered by his opponent in The Ninth Directive. But Quiller wades through mud and his own blood to make sure the final maneuver is his, and the player on the other side is the loser.

Quiller sweeps up all the pieces: how he does it is where the blessed poetry shines through.

Quiller? I've never read him (sorry, I mean Adam Hall) before. He was just a name on a bunch of paperbacks when I was a kid in rural Ohio. But this morning I devoured The Ninth Directive in six hours.

"The 9th Directive was wiped out." 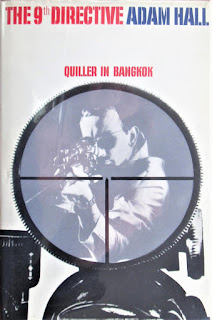 Posted by Jay Rothermel at 3:54 PM