The Prisoner in the Mask by Dennis Wheatley (1957)

The Prisoner in the Mask by Dennis Wheatley (1957)


Only Wheatley had the authorial confidence (or arrogance) to end a novel with the lines "....After a decent interval we can be married with wedding bells and live happily ever after.'"

No one in a Wheatley novel lives happily ever after. The most they can hope for are pleasurable interludes before the next pendulum swing of Fortune again lands them in the soup.

The Prisoner in the Mask is delightfully high class. The hero is Armand, Count de Quesnoy. (He will later inherit the title Duke de Richleau.) His friends are from the same titled social layer.

Some characters and themes more fully explored in later novels about the Duke are hinted at in The Prisoner in the Mask. His mastery of occult forces and "white" magic is foreshadowed in his experiences as a soldier in Madagascar, where he developes his skills in hypnotism and mind-over-matter meditation.

He meets the father of future comrade Rex Van Ryn, a wealthy banker from the U.S. who serves the same purpose as
Blenkiron in Buchan's Leithen novels: a repository of ready cash and unconditional friendship.

The novel begins at the start of the 20th century and quickly transports the Count De Quesnoy from life as a privileged teen in Tsarist Russia to the French military school St. Cyr. His is also in romantic pursuit of Angela Syveton, wife of a powerful Royalist deputy. Wheatley spends most of the novel figuring out ways to keep the Count and Angela thwarted and apart. He does a masterful job.

This is, however, a historical thriller, not a bodice-ripper. Armand is witness to the frame-up, persecution, prosecution, and imprisonment of Dreyfus, and becomes involved in conspiracy as mentor to the young François de Vendôme, whom Royalists hope to make constitutional monarch of France. The Royalists are emboldened by the sorry spectacle of the Third Republic: internally rotting from the scourges of republicanism, atheism, and a politically organized working class movement.

Wheatley made no secret of his conservatism and his worship of Winston Churchill. Like his author, Armand is a staunch rightist, appalled that leaders of the French Army put their reputations ahead of justice for Dreyfus and the honor of their class.

Wheatley is a master of plot vicissitudes. One damned thing after another fouls-up Armand's hopes for his country and his desire for Angela Syveton. Patriotism and eros, however, are inexhaustible engines driving forward this classic of escapism.

And who is the prisoner in the mask? That would be telling... 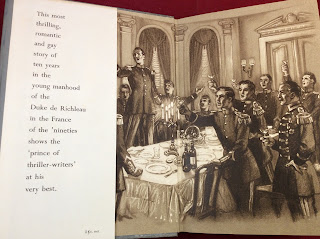 Posted by Jay Rothermel at 5:44 AM