....Later on, Tadzio lay in the sand resting from his swim, a white towel drawn under his right shoulder, his head on his bare arm. Even when Aschenbach stopped staring at him to read a few pages of his book, he hardly ever forgot that the boy was lying there, that it only cost him a slight rightward turn of the head to glimpse that sight which was so worthy of admiration. He could almost imagine himself sitting there for the resting boy's protection, busy with his own matters, yet ever watchful over the fine visual representation of humankind to his right, not far from him. And his heart was filled and moved by a kind of paternal pride, by the sentimental affection of the self-sacrificing creative mind that produces beauty toward someone who simply possesses it.

How quickly today would Aschenbach  be arrested?  Shadowing and stalking a teenager at a resort is not the quaint aesthetic quirk it was in 1912.

Mann uses the term "boy" dozens of times in Death in Venice in reference to Tadzio, the Polish lad vacationing with his family on the Lido.

This recalled to me the use of the term "boy" in James Baldwin's novel Giovanni's Room, which I read a few days ago.  The term was used by a trio of louche male homosexuals stalking youths they hope to seduce.

The objectified "boy" as target of sexual fantasy by adult men might be dismissed as a classically-inspired allusion of contemplative character in Death in Venice.  Mann certainly demonstrates its self-destructive character for Aschenbach .  In Baldwin's novel Giovanni's Room the self-destructiveness is there to a degree, but the real destruction is visited upon Giovanni himself. 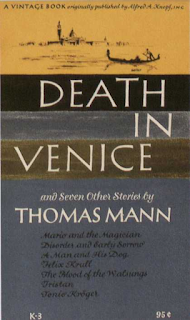 Posted by Jay Rothermel at 7:04 AM