….How primitive, after all, these 'shooting parties' were! For men of brains and character, the best that England could produce, to spend all this time and money, hunting as the cave-men hunted the fox, the deer, the bird — earlier men needed these for food, yet thousands of years later the finest males of the twentieth century — sportsmen all — spent millions on superior weapons, which gave the hunted animal no chance, to bring them down. Not to be a 'sportsman' was to be an inferior Englishman...! The 'sportsman' was the flower of the race. It struck him, not for the first time, as a grim, a cheap, ideal. Was there no other climax of chivalric achievement more desirable?

This flashed across his mind as a hundred times before, while yet he himself, admittedly, was a 'sportsman' born. Against it, at the same time, rose some strange glamour of eternal, deathless things that took no account of killing, things that caught his soul away in ecstasy. Fairy tales, of course, were fairy tales, yet they enshrined the undying truths of life and human nature within their golden 'nonsense', catching at the skirts of radiant wonder, whispering ageless secrets of the soul, giving hints of ineffable glories that lay outside the normal scales of space and time as accepted by the reasoning mind. And this attitude now rose upon him like a wild ungovernable wind of spring, fragrant, delicious, intoxicating. Fairies, the Little People, the 'Gay People', happy dwellers in some non-human state… 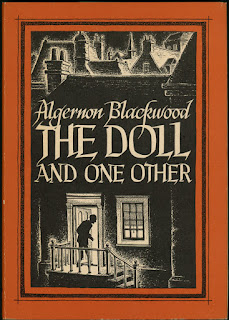 Algernon Blackwood's story "The Trod" appeared originally in the small book The Doll and One Other (1946, Arkham House), then in the Tales of the Uncanny and Supernatural collection, which seems only to be available second-hand.  I found it included here.

"The Trod" is a tale of the sylvan uncanny. It is mercifully free of parapsychological jargon. The action takes place during an autumn moorland shooting party in Lancashire. Blackwood excels in this tale at scene-setting, letting our protagonist, Richard Norman, sense the landscape's allure, then providing background testimony and local legends from a chauffeur and a loader.

The chauffeur provides his mite on the ride back from the train station:

"....I've heard of a haunted house before now, but never a haunted countryside. Yet that's what they believe, I take it. It's all haunted, sir — everywhere. It's the devil of a job to get any of them to turn out after dark, as I know well, and even in the daytime they won't stir far without a crucifix hung round their neck. Even the men won't.'

....'There's a funny sort of road, or track rather, you may be seeing out shooting,' the chauffeur went on eagerly enough, yet half nervously. 'It leads across the moor, and no man or woman will set foot on it to save their lives, not even in the daytime, let alone at night.'

'That's it, sir,' the man admitted, after a longish pause. 'But a queer kind of 'aunting. They do say it's just too lovely to look at — and keep your senses.'

Richard Norman feels a deep yearning for this mystery, asking the chauffeur to drive slower so he can hear everything the man has to tell.

....this talk of haunted country, of bogies, fairies and the rest, fantastic though it was, perhaps, stirred a queer, yet delicious feeling in him — in his heart, doubtless — that his host's niece, Diana, had a link with it somewhere.

....the man described a remarkable incident that had happened, so to speak, under his own eyes. Sir Hiram's sister was lost on the moors some years ago and was never found...and the local talk and belief had it that she had been 'carried off'. Yet not carried off against her will: she had wanted to go.

....'Yes, sir,' he went on, 'and now he's got [Diana] up here for the first time since it happened years ago — in the very country where her mother was taken — and I'm told his idea is that he 'opes it will put her right—'

Blackwood allows his chauffeur a final and more personal anecdote before they reach the shooting lodge:

'...It was like this, you see, sir. The garage and my rooms lie down at an old farmhouse about a quarter-mile from the Lodge, and from my bedroom window I can see across the moor quite a way. It takes in that trail I was speaking of before, and along that track exactly I sometimes saw lights moving in a sort of wavering line. A bit faint, they were, and sort of dancing about and going out and coming on again, and at first I took them for marsh lights — I've seen marsh lights down at our marshes at home — marsh gas we call it. That's what I thought at first, but I know better now.'

'You never went out to examine them closer?'

'Or asked any of the natives what they thought?'

The chauffeur gave a curious little laugh; it was a half shy, half embarrassed laugh. Yes, he had once got a native who was willing to say something, but it was only with difficulty that Norman persuaded him to repeat it.

'Well, sir, what he told me' — again that embarrassed little laugh— 'the words he used were "It was the Gay People changing their hunting grounds." That's what he said and crossed himself as he said it. They always changed their grounds at what he called the Equinox.'

The odd phrases were not new to Norman, but he heard them now as though for the first time, they had meaning. The equinox, the solstice, he knew naturally what the words meant, but the 'Gay People' belonged to some inner phantasmagoria of his own he had hitherto thought of only imaginatively....

"The Trod" is a haunting, well-prepared story, and does not disappoint once the main action begins.

Posted by Jay Rothermel at 8:52 AM