Review: No Sharks in the Med and Other Stories by Brian Lumley 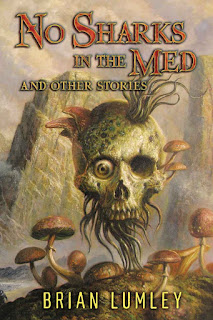 This is consistent, competent artistic talent displayed to best advantage.

When I read in the introduction that "This current volume has no Mythos stories" I wanted to weep with gratitude. Lumley's Cthulhu pastiches twist his own narrative voice and inclinations - his strengths as a writer - into a cocked hat.

No Sharks in the Med and Other Stories is filled with characters in tough situations. Several are coming-of-age stories that intersect with grisly events. Others are tragedies or grim comedies of professional men whose tranquility and sense of social stability are cut away.

The tales are full of boys whose mothers died too young, and find they grow up quick if they survive their ordeals.

Lumley's landscapes are filled with slag-ruined beaches and undermined cemeteries, with decay and collapse, rot, devolution, and some very human monsters.

I enjoyed Lumley's novels Necroscope and Demogorgon, also mercifully free of Lovecraftism (well, Derlethism). No Sharks in the Med and Other Stories gives us a dozen solid stories, each different from the other, even if some share the same locales.

Lumley's energy and the obvious pleasure he takes in creating these modest gems clearly demonstrate they were labors of a craftsman's love.

Some notes and excerpts:


Fruiting Bodies (1987)
Matt Cowan recommended this powerfully poignant story, and after reading it I kept going until I read all twelve stories. An ocean-undermined seaside town was a Jamesian donné, but Lumley abjures buried whistles (and crowns). An all-too natural and material antagonist takes center stage, instead. Our narrator is not obtuse, he simply waits to act until it is too late.

"What do you mean, you can't help? No phone? Are you actually telling me there's no telephone? Then how are we to contact civilization? I have to speak to someone in the town, find a doctor. My husband, George, needs a doctor! Can't you understand that? His lumps are moving. Things are alive under his skin!"

The Picnickers • (1991)
An austere Northern coal-mining region tale that takes place in the interwar period. Sandy spends the summer with his Uncle, the local doctor. Motherless, Sandy is spending his time working up the nerve to cross a local mine's railroad viaduct. Until his uncle and several other local officials are forced to deal with something out of nightmares.

The Viaduct • (1976)
Two young boys decide they will cross the local mine's railroad viaduct hand-over-hand. Too bad they first antagonized the "village idiot."

The Whisperer • (1976)
Our protagonist's comfortable middle class life devolves into nightmare in four black comedy encounters with a whispering hunch-backed dwarf. Not to be missed.


No Sharks in the Med • (1989)
Monsters met on another Greek vacation of the damned. Newlyweds menaced, then fight back.

The Place of Waiting • (2008)
A superlative ghost story set among Dartmoor's tors and quags. An artist who has recently lost his mother seeks her spirit while sketching at Tumble Tor. Looking hard, he sees another figure. Who also sees him. Simply perfect.

The Man Who Killed Kew Gardens • (2006)
They used to be called "cozy catastrophes" before J.G. Ballard and John Christopher turned them inside out and exploded the rules. UK pluck and comradery were at the heart of battles against Triffids and awakened Krakens. Lumley gives us a perfect x-ray of that early type, but ends with the tenor of the later model. It also has me hunting for my copy of "The Saliva Tree," too.

My Thing Friday • (2005)
The only survivor of a rocketship crash finds himself on a planet whose humanoid inhabitants live in a period of primitive communism. Nothing goes to waste. Nothing.

The Disapproval of Jeremy Cleave • (1989)
This would be a perfect twenty minutes in an Amicus portmanteau. If you studied voodoo, then died, why not use your artificial leg and glass eye against a cuckolding spouse? Brutally hilarious.

Posted by Jay Rothermel at 1:36 PM