From the Lower Deep by Hugh B. Cave.

On a small unnamed island off the coast of New England, something has happened.


…."What happened here last night to put the fear of God into everyone?" Zandor was at least intelligent—give the devil his due—and was the right man to put that question to.

The swarthy man impatiently flapped a hand. "Oh, hell. You know these people. The water began rising. The night was black as Brucker's Cave. Imaginations started working overtime, and some of our weaker minds claimed they heard things. Before the night was over, the whole stupid island was in a panic."

"Footsteps, whisperings, all that crap. And said they saw weird shadows prowling about...." 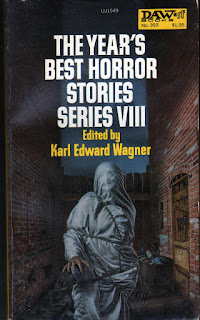 For an easily distracted reader, choice of text often flows from arbitrary decisions or passing comments by other readers. "Way leads unto way," as Frost wrote.

Yesterday, halfway through a collection of Washington Irving stories, a friend mentioned an anthology he just got in the mail. I looked it up on ISFDB, and recalled owning it twenty-five years ago. But I could only remember reading one story out of it.

The great thing about clicking around on the ISFD is that in one or two jumps you are orbiting another book (in this case another anthology) entirely.

All of which lead me to the good old stuff: The Year's Best Horror Stories Series VIII (1980), selected by the peerless Karl Edward Wagner. 1980 was quite a year for the genre.

I selected "From the Lower Deep" by Hugh B. Cave.

I have never read Cave before, though I remember his Zebra paperbacks from the 1980s. "From the Lower Deep" is an absolutely pro horror story. Cave shows off his mastery of ellipses and a deft handling of setting and pace.

At the far end of the room stood the huge walnut desk of which the writer was so proud. Behind that were French windows opening on the now-flooded yard. Between desk and windows something had been feeding.

Yes, feeding. An animal of some kind, breathing noisily in a wet, bubbly way while sucking and tearing at its prey. More than one such animal, perhaps.

The silence now was deafening.

Matthew overcame a desire to cry out and took an irresolute step forward, straining to see in the dark. Why in God's name hadn't he foreseen how long this business would take and snatched up a flashlight before leaving home? The breathing sound began again. A dark shape, ill defined, came twisting out from behind the desk and seemed to study him as it halted. Others came in its wake, stopping the same way as though deciding what to do about his intrusion.

Shapes—that was all they were. Big blobs of darkness, though in some mind-warping way their indistinct outlines suggested the forms of monstrous frogs. A kind of whispering came from their midst, seemingly angry and menacing.

There was a smell that offended....

Posted by Jay Rothermel at 6:19 AM