A is for Affect Horror

Since the beginning of the 1980s, it has become common to state not only that certain emotional responses are normally generated in the reader of horror texts, but also to claim that these responses are, in themselves, what actually define horror. No other genre has ever been defined in terms of the affect it generates in the reader, with the result that critics and writers have found it easy to claim that horror is not therefore a genre at all, but a kind of peculiar sensation that may be generated in the telling of genre stories of any category, or indeed in the telling of texts which have not normally been submitted to generic definition, like Franz Kafka's Metamorphosis (1915). Horror (in this understanding) is a kind of afflatus, a wind from anywhere. As this understanding is hard to describe or to assort with other kinds of understandings of other genres, literary studies have tended not to focus constructively upon horror as formless affect. However, though it is hard to be more than intuitively certain about a term as formally elusive as Affect Horror, there seems to be good reason to think it may be very profitably applied to non-supernatural texts. This is less certainly the case with fantastic horror, which may help explain the relatively minor role accorded to Affect Horror in this lexicon, whose focus is on the assembling of a variety of terms designed to anatomize certain patterns of story in the BOUND FANTASTIC, and to label those patterns HORROR.

But it is necessary to get at the roots of Affect, and to do so we need to touch upon a familiar distinction - it dates from the early 19th century - between terror and horror. Since the 1820s, terror has been defined as an apprehension that something not yet experienced, but deeply to be feared - something horrific, or inhumanly sublime, or vast beyond our frail human capacity to survive the experience of its arrival, or a temblor announcing some deep shift in the grammar of the world - is nigh. Horror, on the other hand, is usually described as exactly not a matter of anticipation; horror is the experience of the atrocity of the thing itself, which can be seen whole. Terror may lie too deep for tears, though FUSTIAN may veil our reluctance to admit that the unsayable is precisely unsayable; horror, which is compounded out of the visceral responses of the appalled protagonist, can be put in words: what you see is what is said. Distinctions of this sort between the two terms have been very erratically applied since Ann Radcliffe first separated them in "On the Supernatural in Poetry" (1826 New Monthly Magazine); but Radcliffe was as inconsistent in applying her arguments to her own work as any of her fellow Gothic writers, and an ongoing fuzziness over how terror and horror differ may be diagnostic of a general uneasiness about the nature of HORROR (the shorthand use of this one term is very generally accepted) as a genre. But the distinction between the two terms remains suggestive. Horror as Radcliffe defines it is Affect Horror in modern parlance. Terror can still usefully refer to tectonic shifts in the nature of the world too fundamental for our senses to apprehend directly; and, so defined, clearly furthers the declared purpose of this lexicon: which is to understand Horror as a pattern of stories bound to the wheel of fire of the world entire. Something similar to this breakdown is of course adduced by H P Lovecraft in Supernatural Horror in Literature (1945) when he distinguishes between "the literature of cosmic fear" and "the weird tale", but his readers have tended to understand these promising divisions as varying descriptions of affect. Terror as understood above has not been a major focus of critical attention for some time.

Two texts may be seen as central to this. In Danse Macabre (1981), his study and defense of the rise of horror literature as a commercial enterprise, Stephen King makes it explicitly and eloquently clear that he writes his novels out of personal experiences of what he - quite fairly - calls horror. From this point, it is a simple transference for him to suggest, as he does variously throughout his text, that the job of the writer of horror is to make the reader experience powerful emotions analogous to those already described in autobiographical terms elsewhere in the text: the menage a trois of writer, protagonist and reader has seldom been more nakedly espoused. There are certainly many reasons that King presses his convictions so firmly here: but one possible reason, highly relevant in the context of this entry, may be that King senses that, without a governor, Affect Horror can become unhinged. Tying the tidal surges of affect to some autobiography - even if the self-portrait so exploited resembles a Penfield motor homunculus more closely than it does any photographic image - still has the effect of contextualizing affect. This intensely conditioned and pragmatic understanding of horror underlies a passage by King which has become famous, both for its cogency and for the slightly disingenous awshucks modesty on display about his achievements:

So: terror on top, horror below it, and lowest of all, the gag reflex of revulsion. My own philosophy as a sometime writer of horror fiction is to recognize these distinctions because they are sometimes useful, but to avoid any preference for one over the other on the grounds that one effect is somehow better than another…. I recognize terror as the finest emotion (used to almost quintessential effect in Robert Wise's film The Haunting, where, as in "The Monkey's Paw" [by W W Jacobs], we are never allowed to see what is behind the door), and so I will try to terrorize the reader. But if I find I cannot terrify him/her, I will try to horrify; and if I find I cannot horrify, I'll go for the gross-out. I'm not proud.

King is writing in 1981, and his own art has evolved constantly since. He has published many tales which demonstrate the power of the dynamic he describes, and in which the tidal flow of affect is channelled through the stigmata of personal memory; but he has also written several novels, a late example being Cell (2006), where what might be called cosmic terror is sublimated - realized - in terms of VASTATION, of an apprehension of the malice of the world that seems almost impersonal. Any recognition of vastation - which is instrinsicate with cosmic terror, and which is treated in this lexicon as central to the description of fantastic horror in general - is difficult or impossible to extract from the zephyrs of Affect Horror. It follows then, that although he remains the most powerful and most influential of those writers who horripilate their readers through intensely wrought body affect, King (as he hints above) is clearly grasped by HORROR as a whole.

In 1982, introducing his anthology Prime Evil (1982), Douglas E Winter, in a passage which has also become famous, effectively translates King's lengthy and personalized explanatory narrative into a generalization: "Horror is not a genre, like the mystery or science fiction or the western. It is not a kind of fiction, meant to be confined to the ghetto … Horror is an emotion." Winter later amplified his argument, suggesting that this emotion of horror was experienced by protagonists, and hence readers, through a powerful need "to confront the unknown": the protagonist of a horror story was himself or herself, therefore, the motor at the heart of the story, whose thrust into the unknown recruited the identification of readers eager for affect. That this can lead to an unhinging of story, and to the kind of escalation of effects almost fatally experienced by the field in the late 1980s and early 1990s, is obvious enough. King's solution is to write his body into affect; Winter, perhaps similarly wary about affect-looping, arrives at a different solution in his one novel of horror Run (2000): he creates a tale which is strictly non-supernatural. Like King's autobiographical body, the verisimilitude of a recognizable world sets brakes to unhinged affect. There are difficulties; King's solution requires a life that can be told; Winter's requires a rendering of the mimetic world that readers can trust when the affect begins to heat.

Some writers resist any such governors, and as a result have nearly killed their genre in the marketplace. It is not necessary to name them here; in any case, other contemporary authors seem to have weighed up the pluses and minuses of their craft during its brief years of commercial success in the 1980s. Peter Straub needed no guidance from others, and in Floating Dragon (1982) piles affect upon affect, in what reads as an entirely deliberate experiment in taking excess as far as it can be taken, without (in the end) ever losing control: for authors less in control of their craft, Floating Dragon may have set a dangerous precedent (it could be argued that the greatest challenge non-supernatural Affect Horror novels in particular must surmount is the risk of becoming stymied in THICKENING, with no storyable exit into REVEL). The later work of an author like Thomas Tessier, some of whose earlier tales are drowned at the pump of emotion, shows a grave coming to grips with the hazards of Affect Horror; a tale like Father Panic's Opera Macabre (2001) superbly allows flickers of visceral horror to illuminate but not to vye with the true horror of the world, which in this case is the Final Solution. Many further examples can be brought forward, but the lesson is the same. Affect Horror unhinged eats its own words, destroys the story the author sets out to tell. Affect Horror shaped uncovers Stephen King in his pomp, gives us strobe flashes of the true terrors we cannot see whole and live.

The Darkening Garden: A Short Lexicon of Horror 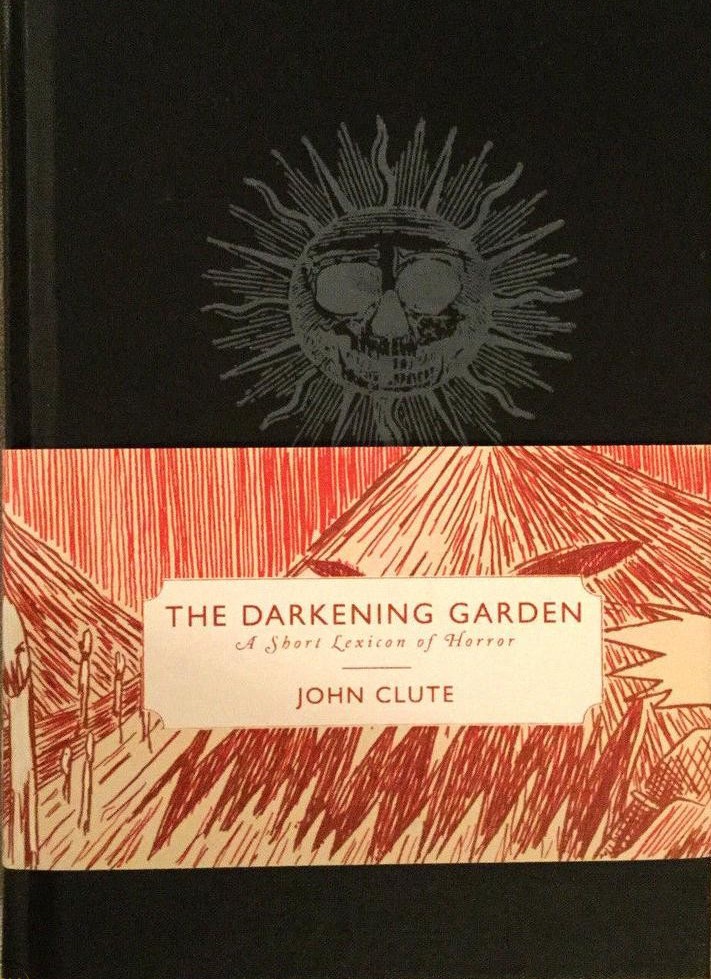 Posted by Jay Rothermel at 7:03 PM