The Robin: The Sending by Geoffrey Household

From Chapter 4
The Sending by Geoffrey Household.
1980

Household's protagonist Alfgif Hollaston has returned to his rural, ancestral home after a career in the Indian Army. He discovers he is the descendant of local Wise Men going back hundreds of years. He inherits the familiar of a recently murdered friend: a polecat named Meg. 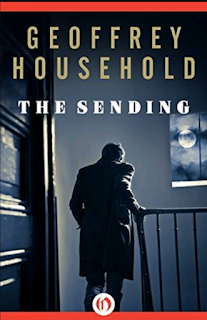 ....I HAVE GREAT DIFFICULTY in reading. When I open a book I cannot concentrate; too often I must look round to see what is waiting for me behind my chair. But I did my best, in spite of interruptions, to follow the record of the trial of the Wincanton witches, especially after discovering that they confessed to being instructed and comforted by a Man in Black to whom they gave the name of Robin.
The prosecution was founded on sound legal evidence of the facts, but the court never attempted to identify Robin. Of course it did not. It assumed that he was the Devil, who could hardly be put in the dock. The witches did not deny it (loyalty or genuine belief?) and sometimes called him Satan.
They sound like some isolated and fading little tribe whose shamans have been killed or civilised, who cannot recover the rites, let alone their meaning, and flutter around like lost hens.
All that is left of the Robin, the chief of the coven, the beast-man, the incarnation of the Purpose and its joy, is my grandfather’s uncanny eye at an auction of livestock together with my great-great-grandfather’s power of healing. This gene which activates the human receptors and skips a generation—what is it up to now? Well, somehow, it was detected in me through my beliefs or my words by the saintly Paddy and by my blood brother. An anthropologist or administrator or explorer would not be capable of sensing the aspects of truth behind the antics of a shaman; a hereditary Robin would be.
Apparently I am a witch—a freelance witch, one might say, with few powers and only the vaguest training in the theology of animism, but possibly with the makings of a Robin. I see that in scribbling my speculations some days ago I came to the tentative conclusion that action at a distance is powered by the dance and self-hypnosis. The latter, I suppose, in more evolved religions is the ecstasy of prayer. That is beyond my reach. I have difficulty in importuning the Purpose. Since I believe in the holiness of the senses, any ecstasy of mine would be praise not prayer: the Te Deum not the Miserere. A Robin may come steaming from the Pit, horned and clawed as the prosecution believed, but can still praise the Purpose.
This written confession of faith has momentarily lifted the Fear. Praise even in adversity like poor old Job? What else has lifted it? The approach of the vixen and my own identity with her, with the oaks and the radiance of moonlight. That was in fact a passing moment of the mystic vision which, I suspect, is the resting state of animals from the butterfly to the tiger, easily to be entered by primitive man and only with long and deep meditation by the civilised.
The Wincanton trials are short of hints and tips on the use of the tame familiar. Our local witches do not seem to have had any. They used animals much as the Roman augurs, setting the scene, calling on the god and foretelling the future by the first beast or bird which turned up. I have watched tiger brother go through a similar ceremony to predict the success or failure of a hunt when he could have done it on his own without any fortune-telling at all—just as Paddy, according to George, could pick winners.
Meg and her like become very important in other trials outside Somerset. The familiar may be supplied by the Robin or bought or just found and tamed. It might occasionally be used for healing but far more often for cursing and petty stuff at that: bewitching the next door neighbour’s pig, stealing some much needed butter, hastening the end of some farmer down the road who was obviously dying of natural causes. All self-advertisement. If an old woman with an eccentric taste in pets could make her district thoroughly afraid of her, she was sure in her utter poverty of gifts and respect. My tiger brother was sometimes no better. His power to send and receive telepathically was beyond doubt, but he was not above hocus pocus if he didn’t get his proper share of what food was going.


I wish he had used a familiar; but since he believed that he could send his soul to commune with beasts in the wild he had no need of one at home. In spite of all this reading I am still unable to answer Rita’s question: what is the importance of Meg?
Posted by Jay Rothermel at 9:48 AM