Stuck in the chimney cowls: The Night Wind Howls by Frederick Cowles

This collection was heavy going. Most of the stories barely rise to the level of adaquate. The much-anthologized "Rats" seems like the juvenalia of a better writer.

"Death in the Well" is James' "Treasure of Abbott Thomas" weakly retold, and with the addition of that crippling cliche, the eccentric psychic investigator. (When I want to see great supernatural writers wreck their material in this way, I'll read Blackwood and Hodgson.)

"Gypsy Violin" is worth reading. The conceit that there is a hellish piece of music which the player can use to destroy his enemies is well-handled.

"Lavender Love" and "The Lamasery of Beloved Dreams" both sounded too wet to attempt.

(There are some unpleasant references to the habits of Jews, Haitians, and "Gypsies" in the stories, but as a Marxist I know Cowles was as much of his time as I am of mine.)

Cowles wrote to pay the bills, which has never been an artistic limitation to the best workers in the genre.

But none of these stories achieve canonical status.

A few underlinings or glosses on the contents:

'....I will come for you at eight o’clock on the morning of the nineteenth of May.’

‘That is the hour I am to be hanged.’

The House of the Dancer

‘Imagination does play some queer tricks,’ he said aloud as he retired to bed. He was quickly asleep, but Valerie de Brisson haunted his dreams. Her face hung over him, and the red lips held an invitation to kiss them. Instead he bent his head to kiss her hands, only to find, to his horror, that they were dripping with blood.

....'You must have noticed that some trees differ very much from others in the impression they make upon a reasonably sensitive mind. A chestnut in bloom usually gives me a feeling of peace and calm: a lilac appeals to the senses: limes are glamorous, romantic trees: a silver birch is wistful: and beeches, with their leaves rustling in the breeze, are vaguely disturbing. On the whole trees are friendly things, but sometimes, in the heart of a forest or even in some isolated position, you may come upon one which seems to be strangely sinister and evil.’

....‘The day after the funeral I arranged for the destruction of the Devil’s Oak. Two stout labourers lopped off the larger branches and then felled the tree. As the trunk toppled over to the ground something rolled out of the hollow bole. It was covered with green moss, but as I picked it up I knew instinctively what it was. It was the skull of a man....'

....‘I know why other tenants have left the cottage, and I know why neither the owner nor myself will attempt to hold you to your agreement.’

....The sound of soft laughter disturbed him. He endeavoured to raise his head and so became aware of the fact that, in some mysterious manner, he had become fastened to the bed. His feet and hands were secured by ropes and his body spread-eagled in a most uncomfortable way. And then he realised that it was no bed he was stretched upon, but the rack—the rack of torture. Master Hugh licked his dry lips and voiced a protest.

‘What is the meaning of this foolery?’ he cried.

‘Not foolery, my brave witch-finder,’ answered the woman who had admitted him to the cottage....

‘How much are you asking for it?’ I inquired brusquely.

The Jew rubbed his hands together. ‘It is yours for twenty pounds,’ he replied. ‘It is well worth fifty or even a hundred, but I shall be glad to get rid of it—that is, I mean to say, I require the room.’

....The priest could not explain the matter and appeared to think that the Count might go on living and troubling the neighbourhood for an indefinite period.

The Mask of Death

....On the 25th of October (it was a Tuesday, I remember) I walked down the shore of Loch Linnhe to Ardgour and then inland to Strontian, intending to seek a short cut back across the moors to Fort William. It was a foolhardy adventure for one who did not know the countryside. But I only realised my folly when, out on the hills, a thick mist suddenly descended.

‘Come now,’ chaffed Mackenzie. ‘You don’t mean to imply that here, in a respectable London club within fifty yards of Piccadilly, you are frightened to speak of a negro superstition?’

The Little Saint of Hell

....‘Seemingly against his will he looked towards the box again and cried, “You can’t accuse me. You’re dead. Go away, oh, go away.” He clung to one of the warders and screamed, “Don’t let her touch me. Keep her away and I’ll tell the truth. Yes, I killed her. I wanted her money but she wouldn’t hand it over. I strangled her and then threw her body into the river. And all for the sake of fifteen shillings and sixpence...."

The Lamasery of Beloved Dreams

The Cadaver of Bishop Louis

Out of the Darkness

‘Now they do say that each evening, soon after eight o’clock, a phantom car speeds along that road. It starts from somewhere about the middle of the lane, tears along with a noisy rattle, and crashes into the river with a hideous splash. Several have heard it, although none but Mad Polly claims to have actually seen it. It is believed that if any other person sees the car it will mean death for him or her.’

The Lover of the Dead

'....You mustn’t think that a house is empty because you cannot see the people in it. The people are there, living in their own time and doing exactly the same things they have always been accustomed to doing.’

‘He or she for whom the first movement is played will go blind at the last note.’

Death in the Well

....He scratched with a wooden scraper. He must have been scraping for over ten minutes when he gave a cry of triumph. He had found the key-hole. I saw his light gleaming far below as he tried to clear it and then he inserted the key. My own torch showed him dragging and pulling, and then a block of stone swung out and revealed a dark aperture. A wild cry of excitement came up the well. ‘It’s here! It’s here!’ he yelled. He plunged his hand into the hole, and I heard a sobbing gasp of wonderment. And then I saw the pearl. It was almost as large as a hen’s egg, and glowed like a pool of moonlight. But the pearl wasn’t the only thing in that dark hiding-place. Something moved in the gloom—something green and horrible, with luminous eyes and a number of waving arms. I yelled a warning, but one of those arms shot out and struck Rutter in the face. He staggered, fell over the edge of the platform, and splashed into the water far below.

....This is the story of Matthew Cantell, once rector of Lishana, who sold his soul to the devil for the sake of a fairy’s smile. Matthew Cantell who took to his bed a woman who had been dead a thousand years, and for his sin is doomed to haunt Lishana Cove until the ending of time.

....The beldame raised her bleary eyes and, lifting her right arm in a threatening gesture, screamed out, ‘My curse upon thee, Sir Joshua Norton. The hands that fire my cottage shall perish, and their owner become a dead thing whilst yet alive.’ 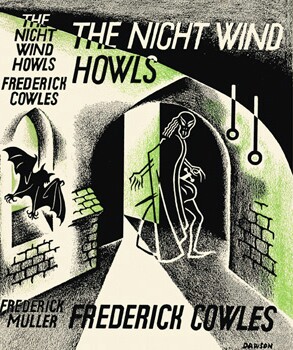 Posted by Jay Rothermel at 1:46 PM