"Blackham's Wimpey" is a carefully earned imagining of Wellington bomber crews terror-bombing German cities in the early 1940s. It has a large cast of characters and a grimly serious topos, though not one cribbed from films like "12 O'clock High" or "One of Our Aircraft is Missing." It is free of preachy why-we-fight propaganda and woke all-war-is-pointless beats out of "Blackadder" and the fiction of Michael Morpurgo. Westall excels with a circumspect use of first-person narration here, and a superior sling-shot ending that safely skirts the temptation to bathos.

Yes, we get a lot of time to think, in Coastal. Think about the old squadron; all new faces by now, nobody left who remembers the end of Dieter Gehlen. Think about all the English ex-­schoolgirls filling bombs till their backs ache, all the German schoolgirls making shells. Think about the guts of German mothers in Hamburg, sheltering their kids with their own bodies from the fire-­typhoon we started. Think about the craftsmen's skill in a Rolls-­Royce Merlin, and a German medieval cathedral. All those people with all that guts, and our top brass are just turning them all into one great big rubbish tip that's slowly covering Europe. While we watch seagulls.

I sometimes think, towards the end of a thirteen-­hour flight, that we died after all, that we're in some kind of peaceful grey Valhalla where good little aircrews go. But where are the rest? Blackham and Reaper and Edwards? And Dieter Gehlen?

"The Wheatstone Pond" is a richly layered masterpiece of supernatural horror.

Jeff Morgan, local antiques dealer in the the London suburb of Wheatstone, is witness to, and then participant in, attempts to salvage lost toy boats from a pond when the local council decides to fill it in. The pond has a long history as a site of suicide, violence and other misfortunes.

Morgan is an excellent point of view character: knowing, glib, and cynical as Lovejoy. But "The Wheatstone Pond" is more than just his story; Westall gives us a host of different characters involved in mysteries and tragedies past and present. Only by their action and investigations do the incredible supernatural origins of the trouble come to light.

"The Wheatstone Pond" is a fully-fledged supernatural thriller, wonderfully shaped and executed.

'Ran Wheeler down to earth, in an old copy of "Strange Stories from the London Evening News". The reference librarian put me on to it. He's a bit into the occult, and seems to have his own little book-­cupboard, for those he favours. And, of course, this being a Wheatstone story, he knew all about it . . .

'Wheeler was an East Ender, and a no-­good. A rag-­and-bone man, no less, and had several convictions for helping himself to stuff left lying about. Used to work the Wheatstone District, back around nineteen hundred and seven or eight.

'Anyway, Abbeywalk wasn't built then. There was just a bit of derelict ground, with grand new houses growing up all round it, and a few tumble-­down sheds among the undergrowth. Apparently he rented the sheds to run his rag-­and-bone business from. Caused a hell of a stink among the nouveaux riches around there, but there wasn't much they could do about it.

'And then, and here's the crazy thing, suddenly he has lots of money to spend. Enough to buy the land he had been renting, and then he suddenly begins to build the present house, about 1911.

'People apparently hated the new house almost as much as they hated him; but again, in those free enterprise days, there was nothing they could do.

'Then he starts flinging his money about, trying to get himself popular, trying to buy his way into their society. There was no Mrs Wheeler: said he was a widower; but he flung himself into the social whirl all right. Garden fêtes for charity; wonderful displays of fireworks on Guy Fawkes' Night; inviting people to dinner. But he didn't get very far, wasn't liked. And complaints of strange noises coming from the house late at night, with lights on in the windows until 5 a.m., and the sound of orchestras playing, and yet no one seen coming or going. And a fuss about one or two children vanishing and never being seen again. Nobody important of course . . . little serving-­girls, boot-­boys whose parents were too poor and crushed to make much fuss.

'And then he joined the Neptune Yacht Club. Damned fool secretary let him join because he lived out of the district himself, and didn't know what Wheeler was like. Apparently it was very grand, the Neptune in those days. Wheeler tried to win the yacht-­sailing races, but was almost too fat to handle the boats he bought; so he failed. Much laughter. Then he turned his hand to steam-­yachts. Won the concours d'élégance, in 1912, by sheer weight of money, and Ross and Makepeace skill . . .

'There was another move to get rid of him, but it failed. And he vowed to come back the following year, and show such a thing as would not be believed. District all agog, in spite of themselves.

'And then, one night, he just vanished. With his two sons. Gave the staff – cook and housemaids – an extra evening off and they came in late and tiptoed up to bed so as not to disturb the family. The following morning, the housemaid takes in the early morning tea – no one there, the beds not slept in. After a day going hairless, they brought in the police.

'No signs of forced entry, no signs of violence. Only one thing missing – the lovely new model steam-­yacht they'd spent the previous three days fiddling with, ever since it came from Ross and Makepeace. It had its own little four-­wheeled cart for conveying it about, and that was found by the shore of the Pond.

'The Police dragged the Pond of course, for three days, but nothing unusual turned up. They thought the family had done a flit, and contacted Wheeler's solicitor, who was as puzzled as they were. The one thing he knew was that Wheeler had made most of his money speculating on the stock exchange. They waited for the usual things then – creditors to turn up, withdrawals from the bank – nothing. Wheeler didn't owe anybody anything, apart from Ross and Makepeace. He never tried to draw his money out, and there was close to £30,000 in the bank – that's about three million by today's standards.

'After that – not a sign of them from that day to this. After seven years, the solicitor had them presumed dead, by the court, and that's when Ross and Makepeace must've finally been paid.'

'Was there any will?' I managed to get out at last.

'No will – no known relatives, though one or two people tried it on in the East End, and one man went to prison for attempted fraud. All the money went to the government in the end, under the intestacy laws. What do you make of that?'

"Yaxley's Cat" is a brilliant novella of city folk spending a week of vacation in the wrong part of rural East Anglia.

Rose and her young son and daughter rent old Mr. Yaxley's cottage. Old Yaxley disappeared seven years before after a lifetime as local Cunning Man. His cottage is preserved as he left it. There's more than one strange book on hand.

Interactions with local people are fraught, and menace increases with each day. At first it is class resentment, the situation quickly deteriorates.

To say nothing of the cat!

The church was busy with women in pinafores, and filled with the cheering odours of Brasso and furniture polish. The chatter was not particularly godly, being mainly about the ailments of the elderly and the adultery of the young. The talk stopped as she neared, but the women smiled and bobbed their heads, as if to reassure her that she was not among the topics of conversation. She started to study the bench-­ends, with great concentration, to indicate to the women what her business in their church was. Satisfied, they went back to dusting and chattering.

She was so lost in the bench-­ends that the male voice startled her. 'Lovely, aren't they? The best in Norfolk, they say . . .' The voice was musical and warm, south Welsh.

She turned and saw it was a little minister, very proper in clerical grey. Chubby face, and really nice smile. He looked young, with his wavy dark hair; a mere boy, except that he was going bald in front. Somehow she knew there was no danger of his going holy on her. Although she was quite religious herself, she had a horror of ministers who suddenly dragged God into a conversation by the scruff of His neck.

'You're on holiday.' It was a statement, not a question.

'Yes.' She smiled back; his smile was really very infectious.

'Wallney?' He raised dark smooth eyebrows. 'Some of my ladies do a good bed-­and-­breakfast, but I didn't know anybody down Wallney way . . .' He gave a little frown, though it might have been only a frown of concentration.

'Oh, Miss Yaxley, yes.' His face cleared. 'My only stalwart in the village of Wallney, I'm afraid to say. Never misses Christmas and Easter. Otherwise, I'm afraid they're a godless lot. If they'd all been like Wallney, I think they'd have broken my heart long since.' His mouth winced slightly, as if at unhappy memories.

'Why should a whole village be godless?' She felt a surge of sympathy; ministers had an uphill struggle these days.

'Oh,' he shrugged. 'They've never had their own church, of course. Country people are more loyal to their church than they are to God. The church is where their memories are . . . when I have an appeal for the tower or the organ or the roof, here, far more people give money than ever come to church, even for harvest festival. I think Wallney must always have resented not having its own church . . .' He went on frowning, as if there was more he hadn't said.

'But it's more than just that?' she coaxed. She liked him; and she was nosy about Wallney.

'Yes, well.' He made a gesture, as if shoving something away. 'There was . . . Miss Yaxley's brother. A troublesome man. Though of course I was sorry when he died,' he added hastily.

'An atheist?' She had had bother with militant atheists all her life.

'No, not an atheist exactly.' He seemed to come to some kind of decision. 'What the old Norfolk people used to call a Cunning Man. Almost the last of them, actually. Thank God. As far as I know, that is. At least we haven't got one in Cley any more. They say, last century, there used to be one or more in every town in East Anglia. Almost like doctors. The National Health Service seems to have finished them off.'

'Father!' An irate female voice was raised from the far end of the nave. 'Will you come and settle something about the altar flowers?'

'Not the damn flower-­rota again,' muttered the minister savagely under his breath. Then he gave her a bright smile, said, 'So nice to have met you,' and whisked away into the female huddle that, from the sound of its voices, was growing more irate by the minute.

Rose waited for him to come back. She was remembering the child in Wallney, who had asked her if she was the lady who was staying at the Cunning's house. 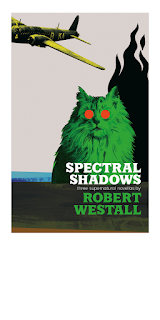 Posted by Jay Rothermel at 5:00 AM