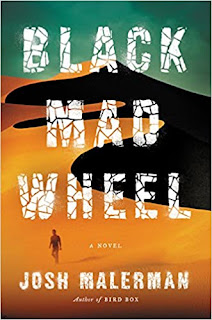 Black Mad Wheel is a powerful thriller about sound, music, and staying on the right path in one's life.

Can sound kill? Can music shatter bone? Can it disable weapons used to wage war through millenia of class society?

Can the U.S. bourgeois regime ever use any science or technology and not shape it as a carceral instrument? Can Comrades leverage their group solidarity as soldiers and artists to overcome medical and governmental madness and despotism?

Josh Malerman's 2017 novel Black Mad Wheel poses the questions with a prosecutor's zeal. The answers come in quaking waves of thaumatropic misprision. At first questions seem like answers begging questions. And from there, as the reader's anxieties are turned up, the narrative develops a pace Buchan, Morrell, and Crichton would envy.


The Danes are a four-man rock band in 1957 Detroit. Childhood friends, they served in an Army band in World War Two, and are a revered local group of cool cats. They also run a recording studio called Wonderland.

The U.S. government comes calling. They want the Danes to accomplish what two previous Army missions have failed to do: find the source of an uncanny sound originating in the Namid desert.

It is a sound with military and existential implications. Even recordings of it can impose catastrophic side-effects. The sound, if a weapon, certainly disables all mechanical weapons exposed to it.

The U.S. government wants the Danes to turn the problem inside-out.

Malerman presents the story in two timelines, in alternating chapters.

In the first, we follow the hospitalization and medical treatment of Philip Tonka. It is after the Danes' mission, and Tonka is the only member retrieved. After exposure to the sound, every bone in his body is broken.


The other chapters recount the Danes' voyage to the Namib, and what they find there. The sound not only disables everything from sidearms to nuclear warheads. It also recalls from the Skeleton Coast's sands soldiers of wars ancient and modern.

Philip Tonka and his nurse Ellen quickly figure out that the U.S. government wants to make Tonka impervious to the sound through biomedical experiments, then send him back to the Namid to lay bare the sound's source.

Tables are nicely and devastatingly turned. Comradeship is restored.