Complete Continental Op 1. The Early Years 1: Arson Plus and Other Stories

All the Op. stories of Dashiell Hammett were published in 2016 in  eight chapbook-sized ebooks edited by Richard Layman and Julie Rivett in 2016.

The stories are beautifully and patiently developed, modest in their ambit; they perfectly convey the vicissitudes and lightning flashes of waking life for petty-bourgeois professionals in the U.S.

Complete Continental Op 1. The Early Years 1: Arson Plus and Other Stories

An eccentric inventor apparently dies in a house fire. The Op. leverages the resources of the Continental Detective Agency on the west coast to uncover the story, buoyed by the camaraderie and elan of the local sheriff's deputies.

....Tarr, McClump, and I sat around the sheriff's desk and argued.

"Those yarns are pipe-dreams," the sheriff said. "We got all three of 'em cold, and there's nothing else to it. They're as good as convicted of murder!"

McClump grinned derisively at his superior, and then turned to me.

"Go on! You tell him about the holes in his little case. He ain't your boss, and can't take it out on you later for being smarter than he is!"

Tarr glared from one of us to the other.

"Spill it, you wise guys!" he ordered.

"Our dope is," I told him, figuring that McClump's view of it was the same as mine, "that there's nothing to show that even Thornburgh knew he was going to buy that house before the tenth of June, and that the Coonses were in town looking for work on the second. And besides, it was only by luck that they got the jobs. The employment office sent two couples out there ahead of them."

"We'll take a chance on letting the jury figure that out."

"Yes? You'll also take a chance on them figuring out that Thornburgh, who seems to have been a nut all right, might have touched off the place himself! We've got something on these people, Jim, but not enough to go into court with them! How are you going to prove that when the Coonses were planted in Thornburgh's house—if you can even prove they were—they and the Trowbridge woman knew he was going to load up with insurance policies?"

"You guys are the limit! You run around in circles, digging up the dope on these people until you get enough to hang 'em, and then you run around hunting for outs! What the hell's the matter with you now?"

I answered him from half-way to the door—the pieces were beginning to fit together under my skull.

"Going to run some more circles! Come on, Mac!"

Harvey Gatewood is the archetypal capitalist of the post-World War One era: a man made rich via swindling and crooked war contracts. Sadly for him his daughter is a chip off the old block and fixes her own kidnapping.

....The Gatewood reunion took place in the office of the captain of inspectors, on the second floor of the Oakland City Hall, and it was a merry little party. For an hour it was a toss-up whether Harvey Gatewood would die of apoplexy, strangle his daughter, or send her off to the state reformatory until she was of age. But Audrey licked him. Besides being a chip off the old block, she was young enough to be careless of consequences, while her father, for all his bullheadedness, had had some caution hammered into him.

The card she beat him with was a threat of spilling everything she knew about him to the newspapers, and at least one of the San Francisco papers had been trying to get his scalp for years. I don't know what she had on him, and I don't think he was any too sure himself; but, with his war contracts even then being investigated by the Department of Justice, he couldn't afford to take a chance. There was no doubt at all that she would have done as she threatened.

And so, together, they left for home, sweating hate for each other at every pore....

The stuff that blackmail and alibis are made of.

....The balls of Clane's fingers were too smooth—or rather, too slick—without the slight clinging feeling that belongs to flesh. I turned his hand over so fast that I nearly upset him and looked at the fingers. I don't know what I had expected to find but I didn't find anything—not anything that I could name.

He forgot his injured feelings and bent to look at Clane's hand.

"I'll be—" he began, and then the two of us were busy for a few minutes taking Clane down and sitting on him, while O'Hara quieted Farr, who had also gone suddenly into action.

When things were peaceful again Phels examined Clane's hands carefully, scratching the fingers with a finger-nail.

He jumped up, leaving me to hold Clane, and paying no attention to my, "What is it?" got a cloth and some liquid, and washed the fingers thoroughly. We took his prints again. They matched the bloody ones taken from Grover's house!

Then we all sat down and had a nice talk.

"I told you about the trouble Henny had with that fellow Waldeman," Clane began, after he and Farr had decided to come clean: there was nothing else they could do. "And how he won out in the argument because Waldeman disappeared. Well, Henny done for him—shot him one night and buried him—and I saw it. Grover was one bad actor in them days, a tough hombre to tangle with, so I didn't try to make nothing out of what I knew.

"But after he got older and richer he got soft—a lot of men go like that—and must have begun worrying over it; because when I ran into him in New York accidentally about four years ago it didn't take me long to learn that he was pretty well tamed, and he told me that he hadn't been able to forget the look on Waldeman's face when he drilled him.

"So I took a chance and braced Henny for a couple thousand. I got them easy, and after that, whenever I was flat I either went to him or sent him word, and he always came across. But I was careful not to crowd him too far. I knew what a terror he was in the old days, and I didn't want to push him into busting loose again.

"But that's what I did in the end. I 'phoned him Friday that I needed money and he said he'd call me up and let me know where to meet him the next night. He called up around half past nine Saturday night and told me to come out to the house. So I went out there and he was waiting for me on the porch and took me upstairs and gave me the ten thousand. I told him this was the last time I'd ever bother him—I always told him that—it had a good effect on him.

"Naturally I wanted to get away as soon as I had the money but he must have felt sort of talkative for a change, because he kept me there for half an hour or so, gassing about men we used to know up in the province.

"After awhile I began to get nervous. He was getting a look in his eyes like he used to have when he was young. And then all of a sudden he flared up and tied into me. He had me by the throat and was bending me back across the table when my hand touched that brass knife. It was either me or him—so I let him have it where it would do the most good.

"I beat it then and went back to the hotel. The newspapers were full of it next day, and had a whole lot of stuff about bloody finger-prints. That gave me a jolt! I didn't know nothing about finger-prints, and here I'd left them all over the dump.

"And then I got to worrying over the whole thing, and it seemed like Henny must have my name written down somewheres among his papers, and maybe had saved some of my letters or telegrams—though they were wrote in careful enough language. Anyway I figured the police would want to be asking me some questions sooner or later; and there I'd be with fingers that fit the bloody prints, and nothing for what Farr calls a alibi.

"That's when I thought of Farr. I had his address and I knew he had been a finger-print sharp in the East, so I decided to take a chance on him. I went to him and told him the whole story and between us we figured out what to do.

"He said he'd dope my fingers, and I was to come here and tell the story we'd fixed up, and have my finger-prints taken, and then I'd be safe no matter what leaked out about me and Henny. So he smeared up the fingers and told me to be careful not to shake hands with anybody or touch anything, and I came down here and everything went like three of a kind.

"Then that little fat guy"—meaning me—"came around to the hotel last night and as good as told me that he thought I had done for Henny and that I better come down here this morning. I beat it for Farr's right away to see whether I ought to run for it or sit tight, and Farr said, 'Sit tight!' So I stayed there all night and he fixed up my hands this morning. That's my yarn!"

"I've seen faked prints before, but never any this good. How'd you do it?"

These scientific birds are funny. Here was Farr looking a nice, long stretch in the face as "accessory after the fact," and yet he brightened up under the admiration in Phel's tone and answered with a voice that was chock-full of pride.

"It's simple! I got hold of a man whose prints I knew weren't in any police gallery—I didn't want any slip up there—and took his prints and put them on a copper plate, using the ordinary photo-engraving process, but etching it pretty deep. Then I coated Clane's fingers with gelatin—just enough to cover all his markings—and pressed them against the plates. That way I got everything, even to the pores, and …"

When I left the bureau ten minutes later Farr and Phels were still sitting knee to knee, jabbering away at each other as only a couple of birds who are cuckoo on the same subject can. 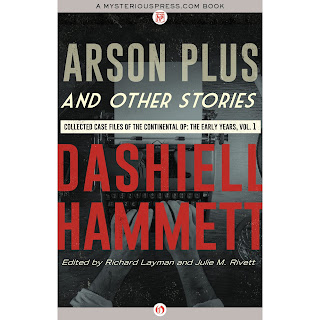 Posted by Jay Rothermel at 8:33 AM