A lover's quarrel with the world: The Best of Robert Bloch

The Best of Robert Bloch

....there are no human laws when you feel yourself in the darkness, when the darkness hides and protects and the outer mask slips off your face and you feel something welling up within you, a brooding shapeless purpose that is brother to the blackness.

District attorneys make the best villains - and this one gets a tasty comeuppance.

....Ronnie lay in bed and dozed as the afternoon shadows ran in long black ribbons across the bedroom floor. He smiled to himself. What a sucker he was! Afraid of a cat. Maybe there wasn't even a cat-all in his mind.

...."Wait a minute," he said. "I'll get the pipe-wrench. It's in the trunk in the car." He went out the back door. She stood irresolute, then headed for the cellar stairs. The splashing was getting louder. The burst pipe was flooding the basement. It made a funny noise, like laughter.

Bloch had many skills, and one of the most prominent was mimicry.  It is used here to brilliant effect.

The piano seems to speak a language akin to one of John Cage's compositions when it is alone with its player.

Try and change the past.  Just try it.

Escaping the modern world down the rabbit hole might not be realistic, but for a member of the Hollywood elite, what other choice is there?

Not Shakespeare's planet, but Macbeth's.

The only smart move is not to play.

A good old-fashioned New Orleans tale of the uncanny.

A rollicking panorama of what happens when a modern city gets chem-trailed with truth spay.

A stripper and her psychiatrist are transported to a future sexual utopia where there is no need for either one of their professions.

It's the journey, not the destination.

A supreme expression of Bloch's evaluation as a feeling liberal of the contemporary world: revulsion, disgust, impatience at violence and dishonesty, of exploitation of man by man. In the tale Bloch also gives a withering critique of intellectual and spiritual fashionableness. And in the end, a dismissal of pretensions toward godhead. A stirring piece of fiction.

A Hollywood writer hears a fly buzz well-before he dies.

…. in a movie world, because when the characters are real, their "authors" do not exist.

A bookend of "The Funnel of God." World- and time-spanning beings evolve (and devolve) their moral sense as they work humanity on the forcing-frame of pre-history.

Poignant temp employment opportunities of bit players in the afterlife.

Other men have tried to take over the world. History is a record of their efforts at certain times, in certain places.

Raymond was such a man. He wanted to overthrow the government of the United States by revolution.

Treating many of the same themes as "The Hell-Bound Train," but via tropes of SF instead of demonic horror.  At which age are men satisfied? At which age is wisdom achieved?

I began reading Robert Block in the early 1980s. His stories were available in many anthologies, and even my small-town library carried a hardcover of Psycho.  At the time I thought Bloch was a very funny writer, and would have compared him to S.J. Perelman, James Thurber, and John Collier if I had been smart enough to read those men at the time, instead of depriving myself for a few more decades.

Many of Bloch's short stories are about men desperate to continue kidding themselves about their predicaments. Others, strong stories like the superb "The Funnel of God," are about men finished with fooling around with the pretensions and transparent hypocrisies that disgust them and drive them to revolt.

How to characterize Bloch as a writer?  He is not a confirmed misanthrope like Bierce, and certainly not a petty bourgeois reactionary like Celine or Lovecraft, maddened by the crushing weight of bourgeois public opinion in a period of economic and social crisis.  I would define Bloch as a "feeling liberal," to borrow a term from U.S. communist leader Jack Barnes.  Bloch has no rooting interest on bourgeois political parties or governments, but he has a passionate interest in dignity and breathing room for individuals to develop free of the warping pressures of capitalist materialism and jackpot morality.

When his characters decide to "drop out," as in the story "All in a Golden Afternoon," or "The World Timer," the humor is found in those trying to prevent the drop-out, underscoring the rebel's sure sense of the situation. 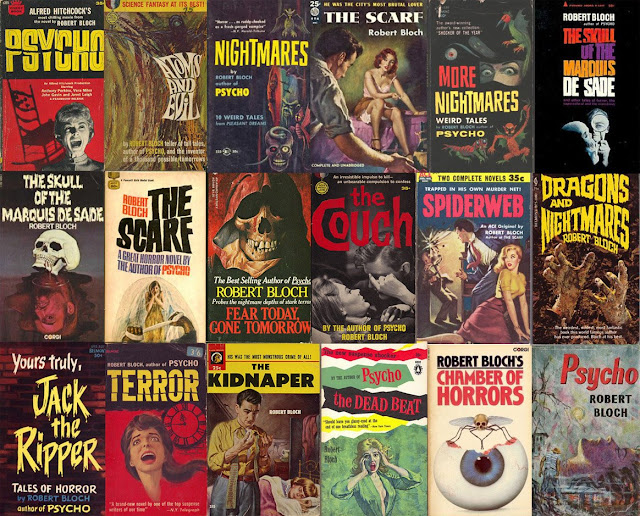 Posted by Jay Rothermel at 5:53 PM