Dennis Wheatley's 1936 novel Contraband is a strong and concentrated example of the inter-war UK thriller. It features Gregory Sallust, who, for want of a better word, we can call a freelance problem solver.In Contraband he is employed by magnate Sir Pellinore Gwaine-Cust to uncover a network smuggling silk from France to England.Sallust gets thrown in with Inspector Wells from Scotland Yard, and together they turn up allies and new enemies at every turn. The smugglers use air planes, fast boats, hidden landing fields, and caves around Romney Marsh, Pegwell Bay, and the Isle of Sheppey to make their deliveries by moonlight.

There are several solid and sustained action scenes at night, featuring cat and mouse pursuit and some shocking reversals. Their chief enemy is the younger brother of the Duke of Denver,Lord Gavin Fortescue:....He's the Duke of Denver's twin, but whereas Denver is a fine upstanding figure, Gavin is a sort of freak. Not a dwarf exactly but very short, with an enormous head and a tiny little body, like a child's in its early teens. They say that his abnormality together with the fact that he was born second, and so failed to inherit the dukedom, embittered him to such an extent that it turned his brain. The story goes that he even attempted Denver's murder when they were boys together.(Readers of Dorothy L. Sayers' novel Clouds of Witness will recall a different Duke of Denver, and a very different younger brother: Lord Peter Wimsey.)Sallust is superior to Bulldog Drummond, whose adventures I have also been reading. There is no casual pleasure at the prospect of bullying and punishment. And the n-word does not make an appearance. Whereas Drummond is a vigilante contemptuous of the forces of law and order, Sallust is a professional hired to do a professional's work.Wheatley gives us two or three sentences suggesting Lord Gavin is part of a communist plot to ruin the UK economy and import outside agitators. Anyone familiar with the class-collaborationist politicians of the Comintern circa 1936 will be amused by this. By 1936 anyone abdication proletarian revolution had already been expelled from the Communist Party of Britain as an anarchist or Trotskyite. Class collaboration and Popular Front were the order of the day.I'll close with an excerpt from chapters 16 and 17.  Sallust and Wells have been kidnapped by Lord Gavin's men, and must fight for their lives against the sucking tidal sands of Pegwell Bay.
Posted by Jay Rothermel at 5:41 PM No comments:

The first film I ever watched 20 times was the original King Kong. In 1976, aged ten, I wrote away for production releases and still photos of the De Laurentiis Kong, which I subsequently saw several times at the theater. This man-in-suit Kong was no more unbelievable than the latest CGI version.  Kong: Skull Island is one of the better monster movies. It features plenty of weird beasties and solid daylight and night action scenes.  It's a lost world story, and that world is presented clearly and with some depth.The main action of the film takes place in 1973. U.S. military forces have been kicked out of Vietnam. A palpable air of military defeat and imperial frustration permeates the movie. No one here will have the hubris to kidnap and publicly display Kong for the delectation of the New York smart set.It's a far cry from Merian C. Cooper and Ernest B. Schoedsack in 1933 or Dino De Laurentiis and John Guillermin in 1976. In 2017, beauty does not kill the beast: they collaborate to thwart remains of the shattered dignity of the U.S. government in Southeast Asia.

The movie recalls Coppola's 1979 film Apocalypse Now in several ways:-A secret mission into the heart of darkness.-A mad helicopter squadron commander (Samuel L. Jackson).-Hueys blaring music and silhouetted against the orange disc of the sun.-A voyage up-river in a small boat.-Rock music needledrops.A few concerns need to be mentioned, however. They all revolve around the shallow and, shall we say, civilian treatment of the U.S. military. I'm sure to veterans the behavior of the soldiers in Kong: Skull Island is even more unrealistic than the behavior of the skyscraper-sized gorilla.  Captains hugging non-coms who have survived a crash? Doubtful, to say the least. Manually deploying munitions from a Huey for seismic mapping? Again, doubtful.A company C.O. taking field orders at a pay telephone booth? It beggars belief.Launching military helicopters from the deck of a freighter?  I'd like to see the footnotes, please.

Actor Shea Whigham seems to be the only actor interested in inhabiting the skin of a G.I.  Unfortunate that his character's death is so perfunctory.Jay3/18/17
Posted by Jay Rothermel at 8:07 PM No comments:

As a cat plays with a mouse: H.C. McNeile's novel Temple Tower

Temple Tower
by H. C. McNeile 1929
Temple Tower is a marvellous example of the interwar UK thriller novel. It is also a splendid return to form for H.C. McNeile after the embarrassments of the previous novel In the series, The Female of The Species.Temple Tower takes place in Its entirety within a few miles of Hugh Drummond's home on Romney Marsh. A thriller reader would have to have a heart of ice not to thrill at name Romney Marsh, with its history of smuggling, night actions, and its previous handling as thriller topography by Russell Thorndike.Drummond and friend Peter Darrow are thrust into a battle waged between criminals over a loot each has claimed from a crime committed in France thirty years prior. The thieves fell out right after their crime, and one has gone to ground with the booty in a heavily fortified former convent called Temple Tower, just down the road from Drummond.A giallo-issue masked strangler named le Bossu is after his share of the loot, and leaves a trail of bodies in his wake as he gets closer to his objective. Two are strangled in the Tower grounds when le Bossu makes his first nighttime attempt to enter. Two more are strangled at the Dolphin inn at Rye. The cat and mouse between the thieves as le Bossu works out his vendetta, and between le Bossu and Drummond's team, is very nicely balanced. The final hand-to-hand showdown between Drummond and le Bossu, in the sand dunes of the Marsh as dawn breaks, is deeply satisfying. This scene clearly shows the connection between Drummond and latter day hulking vigilante Jack Reacher, another former army captain, in Lee Child's novels and short stories.Jay3/16/17 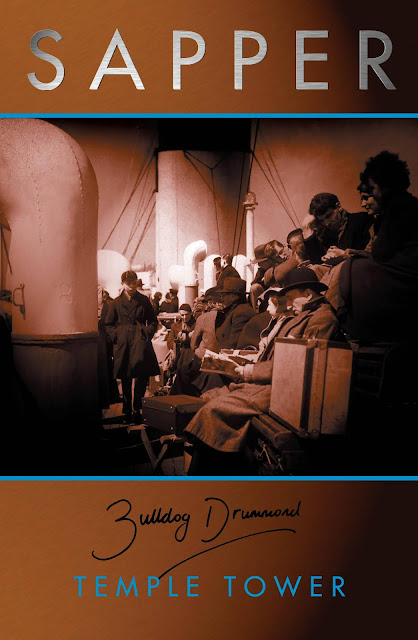 Chapters Seven and Eight give a dramatic recapitulation of the thirty year old crime, and are an adventure story in and of themselves.