Jane the Ripper: Hell! said the Duchess by Michael Arlen

Hell! said the Duchess (1934) by Michael Arlen is a novel of 109 pages. It packs more horrific power in fifteen brief chapters than any other novel I have read. For sheer unnerving and uncanny authority it certainly matches Simon Raven's Doctors Wear Scarlet.

In the novel, the UK is ruled by a Conservative-Fascist government. Oswald Mosley is in the cabinet. Workers are combative, a fact the ruling class chalks-up to "outside agitators."

Revered and respected (by her peers) Mary Wingless St. Cloud Bull, Duchess of Dove, becomes prime suspect in a series of brutal murders of young men in London.

....The Fulham Road Murder, so called from the fact that it took place in Redcliffe Road, was discovered early on the morning of April 17th. The Shepherd Market Murder came to light early on the morning of May 10th. Both victims were young men, the one a shop assistant and the other a bank clerk, who lived alone in lodgings. In each case the youth was discovered naked on his bed, naturally much disarranged, and with the head almost severed from the body by an inhuman slash across the throat from ear to ear. There were other mutilations of a fanciful nature which it will serve no purpose to describe. No weapon was found in either lodging. There were further similarities: a faint perfume, agreeable rather than sickly, much to the surprise of the detectives, who had been brought up to believe that all perfumes were sickly: and cigarette ends with the clearly-defined marks of lip rouge.

The Duchess has an ally in Colonel Victor Wingless, who teams up with Assistant Commissioner Icelin and Superintendent Crust of the Yard to find the real killer. Wingless is a sardonic social observer, as well an an amateur detective:

....let us descend from universal lunacies to the small backyard lunacies which have been such a help to our civilisation these last twenty years, like the Treaty of Versailles, the boycott of Russia, the collapse of the League of Nations idea, the fall of commodity prices below the cost of production, the childish malady which is still known in America as ‘banking,’ the peculiar default of a rather stupid man called Kreuger, then Stavisky, which led to the Paris riots of ’34, the minor civil war of the year after and the re-establishment of a French Directorate last year, and now our Jane the Ripper, who is so eager to establish a family connection with an aristocratic name in a time when aristocracy is not so popular with the people as it was.

As Wingless, Icelin, and Crust get closer to the killer, riots and social upheaval begin to blossom in London.

....The Riots began with sporadic rowdyism on the morning after the finding of the severed head in the Green Park, which nobody believed was made of wax, and lasted for three days. The rioters’ first objective was the Duchess of Dove’s house in Grosvenor Square. Exactly how the suspicions of these wretches had become fixed on the gentle Duchess will probably always remain a mystery. What is certain is that great numbers of the more violent sort, convinced that Jane the Ripper was being protected by the authorities merely because she was the Duchess of Dove, had determined to take the law into their own hands. They called loudly for justice. They screamed their abhorrence of favouritism. They spat on privilege. They proclaimed Lynch Law.

Storming Grosvenor Square in two columns of approximately a thousand persons each, one pouring down Bruton Street and one down South Audley Street from the north, these wretches had Mayfair at their mercy. The police, taken by surprise, and forewarned only of probable attacks on the House of Commons through the day, sought in vain to keep them from their objective. With little difficulty the more arrogant amongst the mob forced their way into the Duchess’s house, having previously smashed every window in the Square to the strains of the Internationale, which they sang with an accuracy possible only to those who had been suborned and trained by alien agitators.

....Had Mary Dove been in her room her fate must have been horrible, for several of the men were so lost to all human feelings that they had come prepared with ropes with which to hang her out of the window in the sight of their gratified friends below. Nor were the women backward in suggesting the most vile humiliations that might be put upon her body. They had to content themselves with lesser outrages. And, unable to destroy the object of their primitive anger, they wreaked their vengeance on her property by hurling everything they could lay hands on out of the broken windows to the yelling crowd below.

....The crowd in the Square became so inflamed by the revelation of what the rich wore next to their pampered skins while the unemployment figures went up—or down, what the hell?—every week, that they began storming the other houses in the Square and debauching their contents. So that presently when a column of Fascists marched into Grosvenor Square from Carlos Place they were met by the disgusting spectacle of common men and women wearing on their heads the chamber-pots of some of the proudest families in England.

Wingless operates under the assumption that Jane the Ripper is disguising herself as the Duchess of Dove. When he finally locates the house where the villain lives, the trouble really starts. Wingless, Iselin, and Crust are dumbfounded by the nature of the tiger they have by the tail.

“You are a silly boy,” she said. “So you want to kill all the evil in the world, do you? And with a gun? It’s really surprising what great faith men put in guns. My child, there is very much less evil in pagan ecstasy than in the filthy ingenuity that goes to the making of one toy revolver.”

Then she cried out in a loud voice different from Mary’s or from any other voice he had ever heard: “This is better than the old way. There is more delight. Oh, there is much more.”

He said: “What was the old way? Who are you?” Then he heard her moving and he looked up and was lost. The two black bright points were glittering in his consciousness. He could not lift the automatic.

She cried out: “I am nameless.”

Her face was so bright that his eyelids seemed to burn. But he could not close them.

She cried out: “I am nameless. I am soulless. I am eternal.”

There was a narrow knife in her hand, and her fingers caressed the slender blade. He could not move.

“You can’t imagine,” she said, in that voice of hers so strange to his ears that he wondered if she was not speaking a forgotten language, “you can’t imagine what a fool I once was. Do you know that I used to bore myself sitting for years upon years within stone images while people worshipped me and the priests sacrificed youths and maidens by opening their throats and cutting out their hearts. It may have been fun for the priests, but you can imagine I was bored to death.”

He forced himself to say: “You are no more than an evil madman who has found some godless means of changing his body.”

“It is more polite, my love, to speak in symbols. Let us say that I am sin incarnate and sin triumphant. Let us say that I was born before the beginning and shall outlive the end. Let us say that the serpent is the father and mother of all the worms that men become. I don’t in the least mind you thinking that I am no more than a scientist with evil powers. After all, research should always be encouraged. But you will change your mind, my love, in the delicious agonies before your death.”

Here is the egomaniacal demon-seducer decades before Clive Barker.

Wingless grapples with the Jane the Ripper thing, and believes when the battle is over that he has become tainted.

For a long time Icelin stared after the tall figure of his friend. Wingless walked very clumsily with his hands deep in his pockets. And it was many weeks before Icelin, or any friend of his, saw Colonel Wingless again. But Icelin’s servant, who was a friend of the Colonel’s servant, occasionally gave him reports.

It appeared that Wingless was obsessed with the idea that his hands exuded an unbearable stench of corruption. It was a certainty, not an idea. This odour made his body, and particularly his hands, unbearable to him. No one could smell this but himself, but he was positive that his servants and the doctors whom he consulted said this only out of kindness. He sat indoors all day long with his hands wrapped in perfumed cloths. But this did no good, and he steamed the skin from his hands. He described this smell which pursued him from his own person day and night as being like that of the monkey-house at the Zoo multiplied ten thousand times. He would not see even Mary Dove who, her health almost regained, lived in even greater seclusion than before and was venerated by all gentlefolk for the shameful misfortunes that had so nearly destroyed her.

Hell! said the Duchess is a great novel, and a great horror novel. The wit here is a sourer form of the clipped and sardonic tone of voice exemplified by Saki. It is not Edwardian flippancy; it is cynicism for a period of imperialist wars and world revolution. It is subtitled "A Bedtime Story," and suits well that uncanny hour between waking and dreaming. 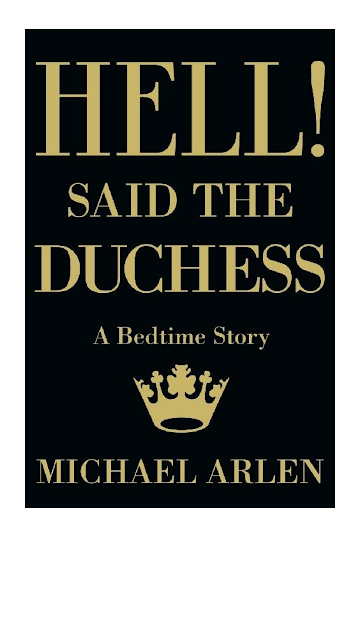