The legacy of a peculiarly English seclusion and continuity: The Night Comes on by Steve Duffy

THE NIGHT COMES ON by Steve Duffy
1998 Ash-Tree Press

Duffy's stories are some of the strongest contemporary examples of antiquarian supernatural fiction I have read. There is no sameness to the plots or characters. Each takes flight very quickly, and with confidence.

The stories are filled with the zest of fresh country air and open spaces: no claustrophobic tapestried chambers here. Our protagonists head out into the world seeking shortcuts to wealth, professional distinction, or simple understanding, and find they are on a different shortcut entirely.

I made a note or underscored a few lines of each story to help fix them in my mind.

Introduction
....All those writers of supernatural tales—Mary Elizabeth Braddon, Algernon Blackwood, Amelia Edwards, all the rest—were they really dreaming aloud, refining their innermost fears into the stuff of art, the better to cope with them? Did they look at their ultra-civilised world and see the skull beneath the skin; see disorder always waiting underneath the surface, ready to break through and tear everything down? Certainly the ghost story is a particularly well-adapted vehicle for such concerns as these, dealing as it does with the incursion of the inexplicable into the everyday. It’s to do with doubt and fear and guesswork; it suggests that the real business may be taking place elsewhere, where we aren’t looking, and only occasionally breaking the surface in odd little nooks and crannies of our lives.

1. The Night Comes On
A London pantechnicon stores an unwholesome relic from ancient Egypt.

2. Out of the Water, Out of the Earth
Professor Westhall has an unpleasant stay at a mountain villa in the wilds of Italy.

3. The Close at Chadminster
The guardian of the cult of Cedric of Chadminster, founded on a lie, is hard to dislodge.

4. The Last of the Scarisfields
An uncle fights a losing battle to save his nephew from the inhabitant of an ancient oak.

There is a hungry Hanging-tree,
That stands upon a hill;
There is a dismal Guardian
And I must do his will.

The hour is come to midnight,
The moon is cloaked in cloud,
The air is fill’d with Voices
And none of them aloud.

O Lord in Heav’n protect me
Tho’ none on Earth may hear;
Deliver me from Evil
From That which most I fear.

5. The Hunter and His Quarry
‘Excuse me—did I understand you to say that no one goes near the island, even to the present day?’

6. The Ossuary
"....the strange circumstances surrounding that year’s performance of the Danse Macabre were not brought up during the official inquest. Only the abbot, the sacristan, Mr Metfield, and Roger were aware of the discovery in the ossuary, and it was agreed amongst them that such matters were of their nature inconclusive and of no possible help to the court, and as such perhaps best left uninvestigated."

7. Running Dogs
"....Before long, more of the animals came ambling in ones and twos; some from the direction of the sand dunes and the village beyond, others from down the line where the train had gone, all pattering up to join the others and taking their place in the formation. By the end, I should say there were some twenty-five dogs facing me and staring me down."

8. One Over
The sea recedes for months from the fishing village of Rushwold.

"....now I see young Billy there in his bed, goin’ downhill every day that passes, an’ I hear him shoutin’ out in his dreams about the bad man—an’ what’s more, last night I heard him, outside the cottage, just before we come on Billy stretched out there on the floor by the window: a big old thing a-goin’ off down towards the sea, slidin’ on the rocks an’ the pebbles, so help me...."

9. Figures on a Hillside
The ancient and treasured chalk outline of a man on a hillside may have had a darker companion nearby, waiting to be uncovered.

10. Ex Libris
Mr Oxtoby thought he came away from the secluded country house with a priceless copy of a very early edition of the collected sermons of Lancelot Andrewes. But when he opened the cover later, it was something else entirely.

11. The Story of a Malediction
It wasn't a Gypsy altar they uncovered when building the golf course. Those weren't Gypsies who demanded the return of their sacred artifacts. And Those were not accidents that befell the locals involved.

12. The Vicar of Wryde St Luke
"The Rector was silent for a moment, and
Burnage could hear the breath rattling in his chest. ‘It was dark,’ he eventually repeated; ‘it was too fast; we couldn’t see properly in the darkness . . . But Burnage: lock the doors now—please, before anything happens...."

13. The Marsh Warden
Just because the fenced-off, shunned,  and overgrown acre between your pub and the north side of the church turns out to be your property doesn't mean you should develop it.

14. The Return Journey
“Item: provision of hearse and appurtenances thereto for the return journey from Highgate, at a time and date suitable to the occasion, to be confirmed at the client Mr Humphrey Riddell’s convenience”—and there’s no charge listed, sir,’ he concluded, his voice wavering pitiably.

15. Nigredo
"....Now I think any of us would have found it hard, having been thus far successful in our endeavours, to have resisted the temptation to look among the weed-covered debris for one particular flagstone, with a ring set into its surface; Colville, at any rate, could not resist it, and you may judge his excitement when, after a little grubbing around with a stick, he came across just such a stone, its ring clogged with soil and rusted hard in its groove. The romantic and attractive notion of buried treasure flashed across his mind; for a moment forgetting the unlikelihood of the alchemist’s hoard remaining intact, to say nothing of its actually having existed in the first place, he strove to free the metal ring, first with his stick and then with his penknife...."

16. Tidesend
....‘They were big old cellars, huge brick-lined vaults, and the Nethercotts had apparently extended them till it was a perfect labyrinth. There was a kind of shrine set up down there, with an altar-stone; there were animals, too, chained up, some still alive, barely, most of them dead. Dozens of bodies: it was all the police could do to look in some of the chambers, and as soon as they could they sealed them off and locked the house up. Wilshaw still thinks there was more to be found down there, if they’d had the stomach to look—or to dig. That was how it was left, though, and no one heard anything more about the old woman.’

17. On the Dunes
"....There were arrests, and executions too: but how could the facts of the matter ever come out? Certainly it was a plot, laid by those who wished ill to the English landlords and their offspring; certainly, the cruelty of Ireland's wretched past had once more obtruded into the present day—but never so strangely, nor so terribly, as on those dunes where the victims of the Famine were laid so long ago...."

18. The Lady of the Flowers
‘Every year, there are signs,’ began the hotelier, and paused for a moment, coughing from the smoke and gesturing towards the Hall. ‘Signs to keep clear before the last night. Little things, but you always know it's her. Only in the days before, mind, when you first start to notice. If you take the warning, and clear out before then, it's all right. Even just the morning after, you'd never know. There'll be a few feathers, perhaps, or it might be petals, lying around upstairs, or in the corridors—but what's that, the rest of the year, when there's not the slightest thing to give the secret away?'

19. Widdershins the Barrow Round
…..He also wrote that the labourers on his workforce were much plagued by dreams—‘or rather call them Adumbrations: grim Portents that foreshadow these most unnatural Ends of Men’—dreams of dead men rising from the fens, and seizing the dreamers; of death-struggles in the marshes, and the corpse-fattened eels that fed off human flesh. Such dreams, he opined, were endemic to the region, and had their groundings in hard fact. For his part, he held his sturdy Dutch faith before him as a shield, and kept clear of barrow and fen between the hours of dusk and dawn.

20. Off the Tracks
‘Damn strange show, that! I went up and down that stretch of track twenty times, it must have been, from one end of the cutting to the other, but there was nothing—nothing at all to suggest that not thirty minutes ago there'd been steps up to a door, and people waving through a window from within. I had to give it up, in the end; a freight train came by, and gave me a bit of a shock, on top of the brain-teaser I'd already had, and I made my way back to the platform a mightily puzzled man, I can tell you.' 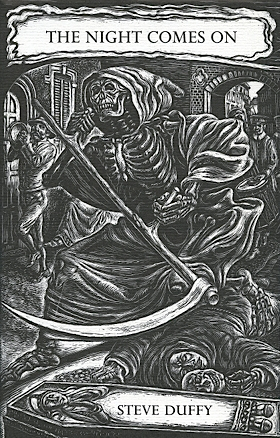